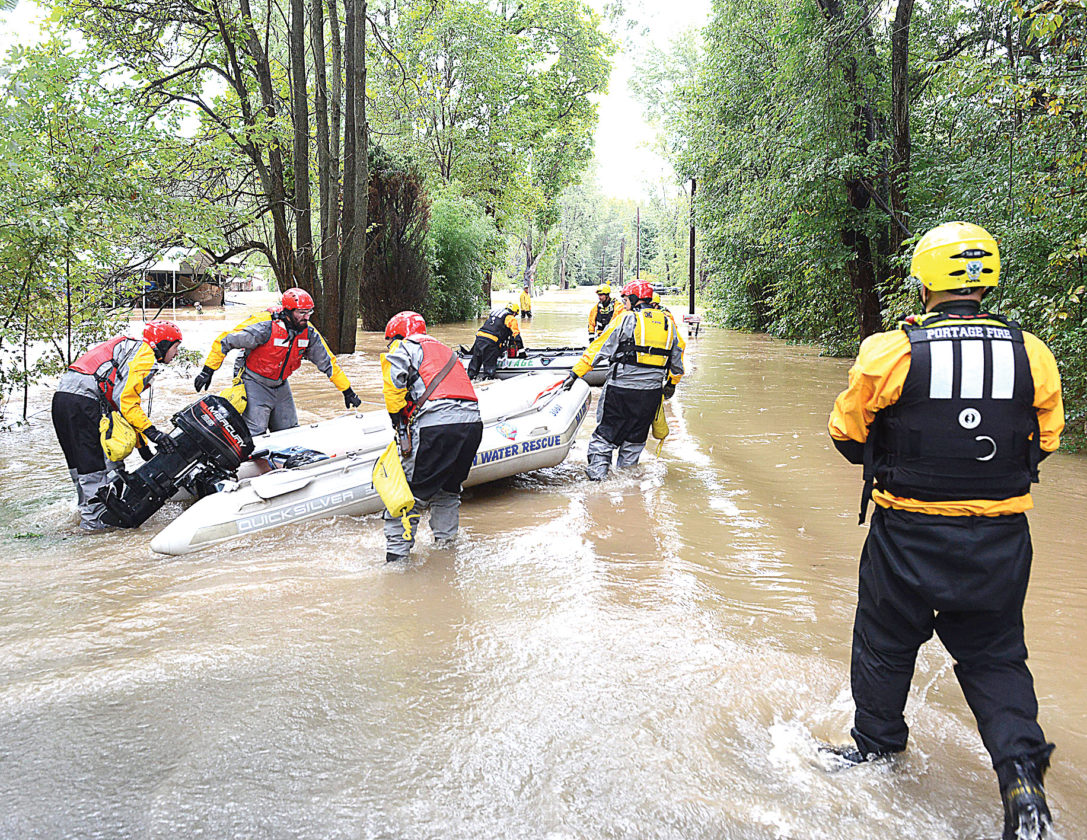 Mirror photo by Gary M. Baranec Members of Geeseytown, Saxton and Portage volunteer fire companies performed a number of water rescues in the Linds Crossing area of Frankstown Township on Monday as residents sought to get out of the floodwaters.

Some schools dismissed early as superintendents feared rising water levels throughout the afternoon would prevent safe passage home for students.

The scene was the same in Bedford County, as relentless rain from remnants of Tropical Storm Gordon and a frontal boundary soaked the region.

“The heaviest rain is over,” State College National Weather Service Meteorologist Michael Colbert said. “There are still showers pushing though, but it will wrap up about midnight. Streams and creeks will go down.” 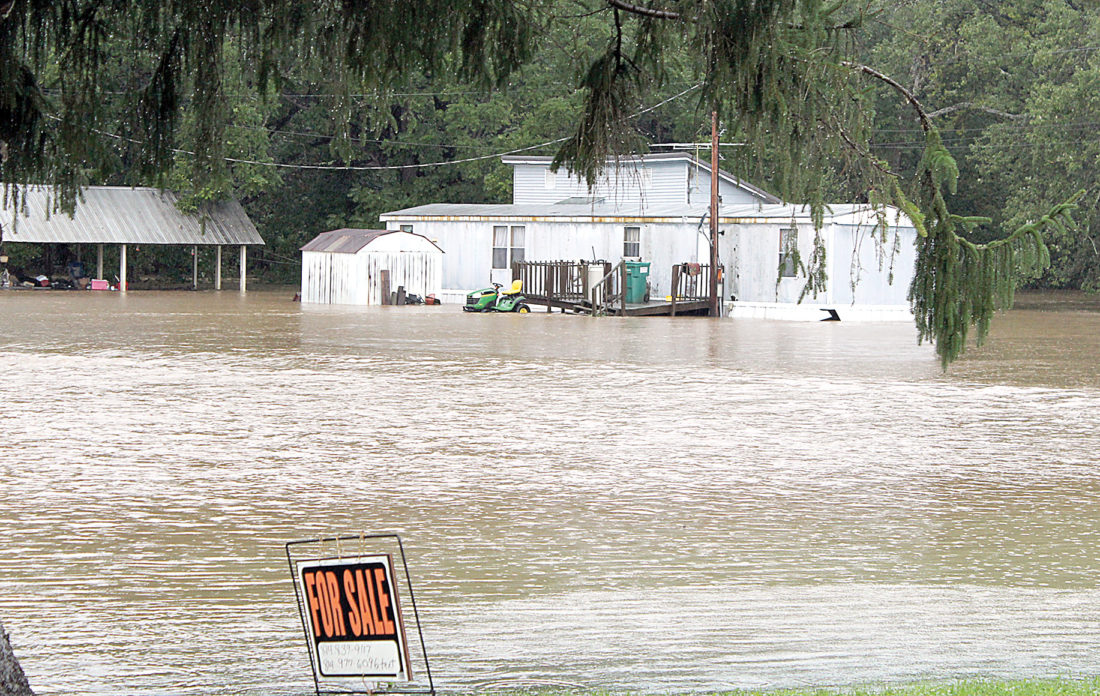 Mirror photo by Holly Claycomb Bobs Creek overflowed its banks Sunday afternoon, closing local roads and inundating homes located along its banks in the Reynoldsdale area. This home along Reynoldsdale Road was surrounded by the rising waters of the creek, which is usually located a few hundred yards behind the home.

Some people ignored warning signs and drove on flooded roadways, causing their vehicles to float off the road or to stall, he said.

Cubbison said that EMS staff and volunteers responded to all rescue calls, but added that people who ignore warning signs are putting the lives of themselves and rescuers at risk.

He said the Saxton region along state Route 26, the Raystown area and Camp Pleasant in Alum Bank experienced a lot of flooding.

Waterways from Everett heading to Saxton were experiencing rising water levels, as well, he added. 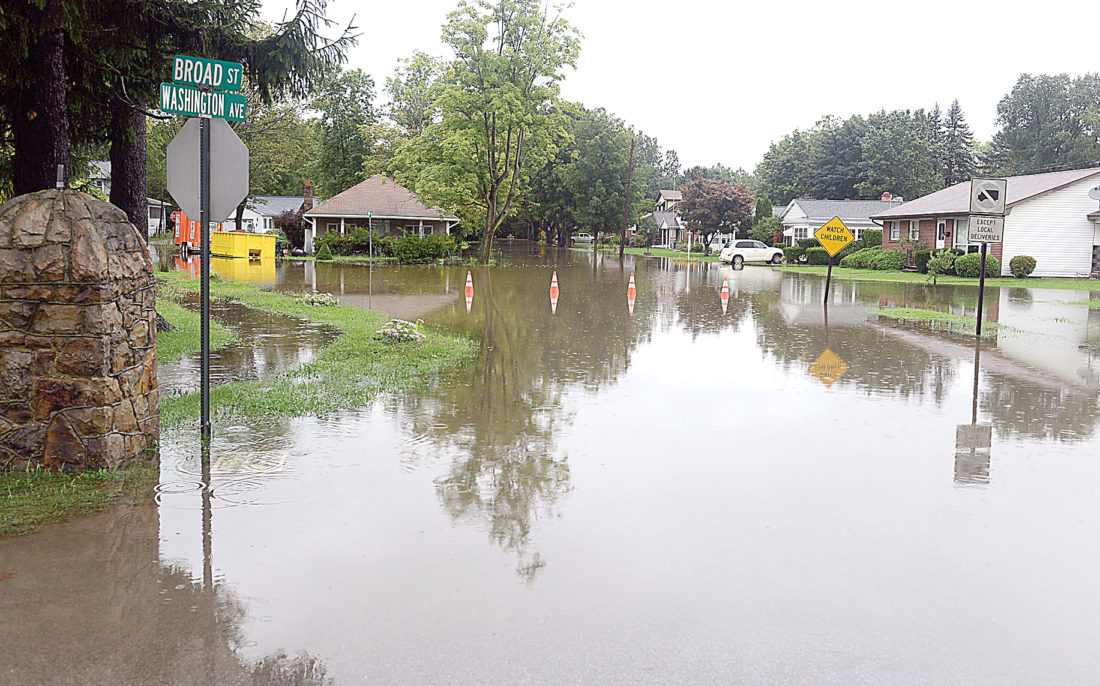 “The ground is still pretty saturated,” Cubbison said, commenting on how the ground is typically dry around this time of the year.

Bellwood-Antis Superintendent Tom McInroy said he is unsure how the next few days will unfold once Hurricane Florence moves onto land, dumping more rain on the East Coast.

The National Hurricane Center is forecasting Florence to be a major hurricane, Category 3 or 4, when it hits the coast Thursday. Florence may become only the fourth Category 4 hurricane to make landfall along the U.S. East Coast north of Georgia.

“Even by Saturday, it’s still in North Carolina — if that’s the case, then it’s good news for Pennsylvania. But it’s still an uncertain forecast. If it comes up further north Friday, Saturday or Sunday of the coming week, there would be plenty of water issues for central Pennsylvania,” Colbert said.

Williamsburg Community School District announced its closure Monday morning while other districts — Claysburg, Tyrone Area, Hollidaysburg Area and Bellwood-Antis — delayed the start of school or dismissed early. Hollidaysburg Area’s Frankstown Elementary School was closed from the start, as roads in that area were closed.

The Bedford Area School District was closed all day due to weather conditions. Students in the Northern Bedford County School District attended school for a couple of hours before being dismissed before 10 a.m.

Between a two-hour delay and an early dismissal, Bellwood-Antis students received lunch and instruction time from 10 a.m. to noon, so it counted as a school day and will not have to be made up later in the year, McInroy said.

“I’ve only ever done this once or twice before when hurricanes dump a lot of water on us. This is unusual,” McInroy said.

“Student safety is the most important thing. This was not ideal by any stretch of imagination. There was a foot or two feet of water preventing passage along roads, and in some places, it was swift water,” he said. “Safety is everything. Hopefully it was the safest, smartest call.”

Multiple roads across the region were closed Monday due to flooding. PennDOT urged motorists “to be alert to water on roadways, obey warning signs and traffic control devices and never drive through flooding or standing water on roads.”

Moving water can wash a car from a roadway, and a flooded roadbed may not be intact, PennDOT officials said.

The Pennsylvania Department of Transportation has announced the following road closures due to the rain:

Lutzville Road from the on ramp from Route 30 West at Lutzville Road to the intersection of Ashcom Road in Snake Spring Township.

Imlertown Road from the intersection of Briar Valley Road to Younts Road in Bedford Township.

Juniata Valley Road from the intersection of Route 22 to Upper Reese Road in Frankstown Township.

Fox Run Road at the intersection of Yellow Springs Drive in Catherine Township.