Model train weekend ‘brings out the little kid in us’ 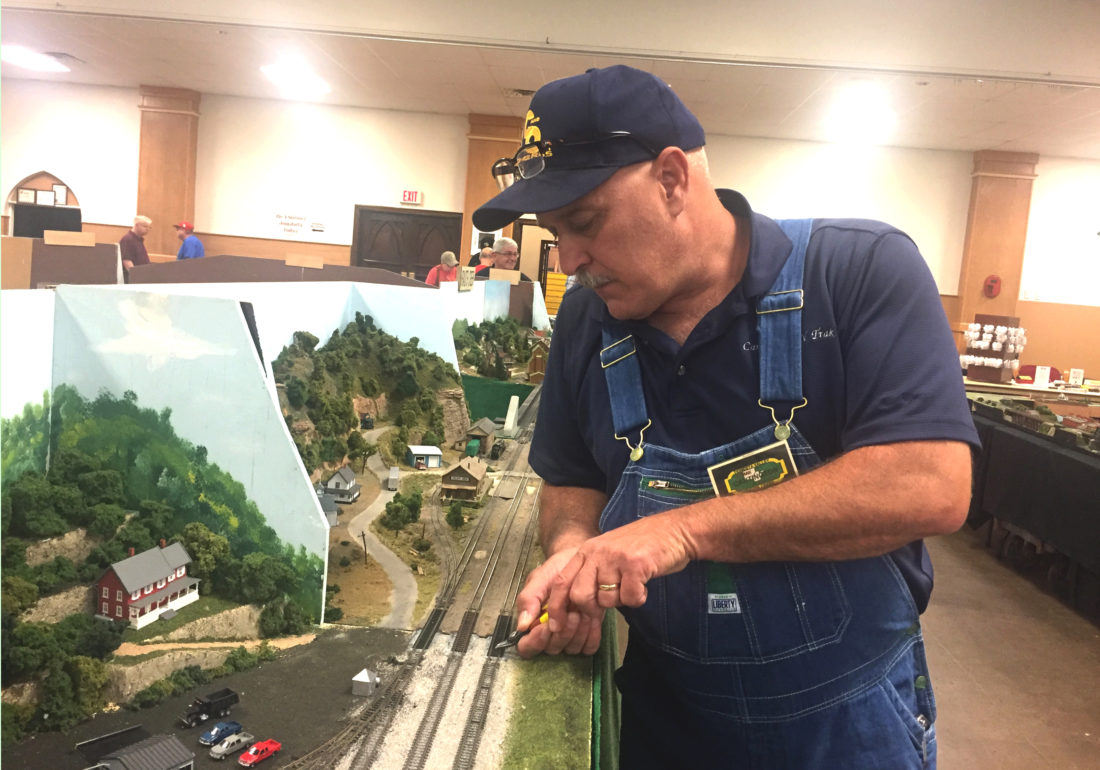 Steve Crace, a member of N-Trak Cantington in West Virginia, tinkers with the railroad tracks on the group's model train display at the Bedford Model Railroaders' annual event on Saturday. Mirror photo by Shen Wu Tan

The trains tracked through displays of rural towns constructed of styrofoam, plastic, plaster and metal — complete with miniature cars, people and animals.

Participants traveled from Maryland, Ohio, Kentucky, New Jersey, Harrisburg and other locales to build and show off their model train displays and purchase various model train supplies, including a customized show car made specially for the N-Scale weekend event.

Mike Phillips, a Bedford Model Railroaders member, said the N-Scale Weekend started as an annual event in Bedford. This is its third year at the Jaffa Shrine in Altoona, according to Phillips.

He described the N-Scale Weekend as an enjoyable event that has almost turned into a family event.

“I’ve known most of these people for 13 or 14 years,” Phillips said. “It’s like a family. Their husbands and wives come. Guys bring their girlfriends.”

“We just have a lot of fun with it,” he added. “That’s the bottom line. We enjoy doing this, and it’s fun doing it.”

The annual event also includes a pig roast, door prizes and an auction. Proceeds from the auction go to the Shriners Hospitals for Children either in Philadelphia or Erie.

Paul Fulks, an N-Trak Cantington member from West Virginia, made an 8-hour drive with five other members to participate in the event.

Fulks, with the help of the other members, constructed a model train display consisting of about 200 modules, which took five hours to set up for the event.

“We enjoy toy trains and the camaraderie of the group,” Fulks said. Most of the places on the N-Trak Cantington’s display are fictitious, but two of them are prototypical representations of Cass and Thurmond in West Virginia

The N-Trak Cantington members, like many other participants, used computers and smartphones to digitally operate their displays.

Many event attendees commented on how model train displays help them reminisce of their childhood years.

N-Trak Cantington member, who dressed as a “laid back” railroader, said trains were a major part of the eastern Kentucky culture he grew up in.

“It’s kind of like Altoona area. There’s a lot of railroad history down through southern Virginia and eastern Kentucky,” Crace said. “You get used to seeing trains. You either hate them or you love them.”

Crace built a section of the N-Trak Cantington’s display, a project which took two years to complete. He said he has a model train display in his basement as well.

He’s built model trains since he was six years old, describing the hobby as peaceful.

D.J. Arlia, an event attendee and CSX railroad engineer, said he traveled from the Greensburg area to attend the event to find deals, social network and brainstorm new modeling ideas.

He said he builds model train displays and teaches people how the railroad works and how to model it on his YouTube channel.

Arlia said he has worked with life-size and model trains for 20 years.

“Everybody knows someone who’s worked for the railroad,” Arlia said. “It’s something that you’re born into. I see little kids waving at the trains all day. I was that little kid … it’s something you’ve discovered as a kid.”

“This brings out the little kid in us,” he said of model trains and the event.