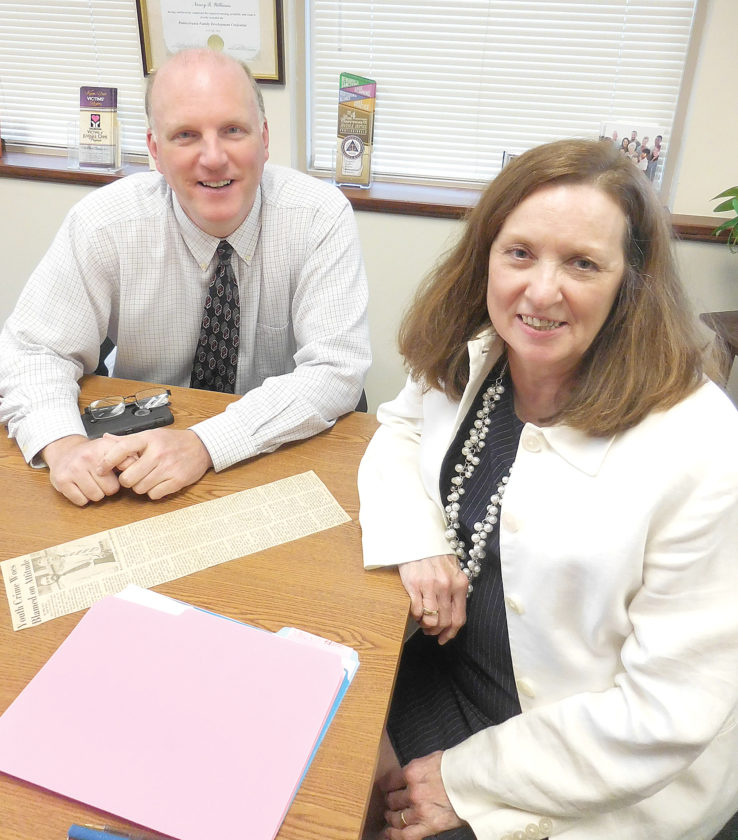 HOLLIDAYSBURG — When Nancy Williams started working in the Blair County juvenile probation office in June 1975, truancy and probation violations were the common offenses.

And juvenile offenders who landed in county court were often separated from their families to spend time in the county’s detention home.

“The thinking was different back then,” Williams said as she ends a 43-year career in the county office where she has been the chief juvenile probation officer since 1995. “We know a lot more now about helping kids who are in trouble.”

Before Williams became chief juvenile probation officer, she spent 13 years as the office’s chief deputy. And now that she retired from that post last week, Chief Deputy Jon Frank, who has worked 30 years in the office, has succeeded her.

“We’ll miss Nancy,” Frank said on the day before his boss retired. “We’ve piloted a lot of programs over the years.”

“Working with young people is challenging,” Williams said. “But it keeps you learning because you have to keep up with the generations and changes in society.”

Frank said he is familiar with those changes and happy to keep working with his fellow staffers whose mission is helping youth to become responsible and productive members of the community.

“We don’t have any throwaway kids,” Williams said.

“It’s spending time with the kids,” Frank said. “That can make a huge difference in whether a kid gets in trouble again.”

“So many different theories have developed over the years,” Williams said. “When I first started … it was common for the offenders to be put in detention facilities, away from their families.”

By the mid-1980s, however, those who worked with juvenile lawbreakers were being encouraged to direct them into community-based counseling and treatment programs.

“When that started, it was sort of revolutionary,” Williams said.

But community programs provided an option that helped those youth avoid the trauma their predecessors experienced upon being from their homes, families and familiar places.

“We now know that if a youth stays with their family or has a way to keep their connections to other adults, they’ll do better by remaining at home,” Williams said.

That option is sometimes “a tough sell” for people familiar with the juvenile and the offense, Frank said. He said he has answered more than one phone call, including ones from school personnel, who want to know why the juvenile probation office is allowing a youth to be “out on the street.”

Frank said he will explain to the caller that decision was made by a judge, not the juvenile probation office. He said he’ll also try to explain some research in support of the decision that was made.

“Sometimes I have to eat my words,” Frank said.

Williams said she has worked with many judges during her career and considers Blair County to be fortunate.

“Juvenile court has always had equal standing with the others courts,” she said. “Our judges have never considered us to be a kiddie court, and they always seem to value what we do.”

And juvenile court, Williams said, is valuable as a preventive measure.

It can keep a juvenile from becoming an adult offender, and that’s a formula for saving tax dollars down the road, Williams said.

Blair County’s juvenile probation office receives about 350 referrals annually about delinquent acts committed by youth between 10 and 17 years old, including some who commit more than one act.

“We’re probably supervising about 225 kids in a year,” Frank said.

Over the years, it has initiated an ongoing relationship with the county’s Children, Youth & Families office because it may be working with a juvenile offender and family. It also works with district attorney and public defender’s offices when trying to come up with ways for juvenile offenders to address what they’ve done.

And since 2000, the county’s juvenile probation office has designated a staff member to work with victims of juvenile crime who may be looking to the young offender for restoration or restitution.

“That was another big change while Jon and I have been in administration,”

Blair County Com­missioners Chairman Bruce Erb recently recognized the retiring Williams for her longtime service to the county. He also praised her for developing statewide recognition through her participation in organizations and efforts focused on juvenile justice reforms.

Frank also became involved in that same organization in October 2012 when he was promoted to the chief deputy position. He currently sits on the organization’s executive board and serves as board secretary.

Williams said she expects Frank will do well as the department’s chief probation officer.

Frank started with the county as a probation officer in 1988 and became an office supervisor in 1995. He holds a bachelor’s degree in administration of justice from Penn State and a master’s degree in criminal justice from Shippensburg University.

Williams said she hopes that Frank has more success than she had with trying to secure better salaries for the department staff.

“Our starting pay for a probation officer is $10,000 less than what the starting pay is for a caseworker in the children and youth office,” she said.

Other than the pay, Williams said she has no complaints about her work.

“I loved having a career in juvenile justice, and I’d recommend it to anybody,” she said. “But I’m ready for retirement, too.”