Local patient: ‘It helped me immediately’ 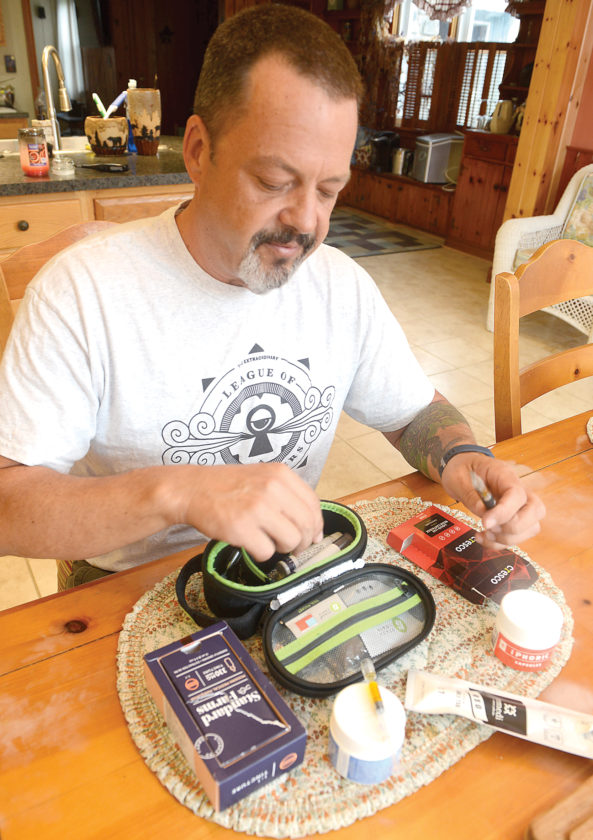 Ron Boyles of Tyrone uses a wide range of substances derived from marijuana to combat many of his health issues. He is the president and founder of Green Bridge Society, an organization intended to guide certified patients through the state’s Medical Marijuana Program. Mirror photo by Gary M. Baranec

In 1999, Ron Boyles injured his back, had surgery and was “thrown into” pain management, mostly relying on opioid medications.

“I spent the next 10 months in the doctor’s office two to three times a week,” he said. “I lost most of my adult life to my health and medications.”

“I really thought if I got off the opiates, that would be it. I would be fine,” he said.

Then, in 2015, he heard about a possible alternative to treat his underlying pain — marijuana, an illegal drug in Pennsylvania that had found legitimacy elsewhere as medicine.

“And I did it the first time,” Boyles said, not shying away from the fact that he purchased the drug illegally. “It helped me immediately.”

The effects were great, he said, but Boyles admitted he was conflicted.

“I realized I didn’t want to be a criminal,” he said.

So he made a trip to Colorado — a trip he said lasted multiple months.

In Colorado, marijuana had already been approved as a legal medicine.

And since April 2016, the same is true in Pennsylvania, where residents suffering from a list of specified illnesses can be certified to purchase marijuana from licensed dispensaries.

And now, Boyles is back, living in Bald Eagle, where he operates as the president and founder of Green Bridge Society, an organization intended to guide certified patients through the state’s Medical Marijuana Program, helping to familiarize them with various products and potencies.

“My phone hasn’t stopped ringing between patients and doctors and news people,” he said of the attention his service is getting.

“I want this to work for people because it does work,” Boyles continued. “I see a time where everybody is going to have this in their medicine cabinet.”

For now, only those suffering from a list of 21 specified “serious medical conditions” can be certified by a qualified doctors to purchase the drug.

Those cards, in addition to state ID, must be shown each time a marijuana product is purchased from a certified dispensary.

As of late June, 47,723 patients in Pennsylvania were registered to consume medical marijuana, 25,108 marijuana identification cards were purchased and 70,162 “patient dispensing activities” were recorded, said Nate Wardle, a Department of Health spokesman.

The term “patients” refers to both adults and children.

Most children participating in the state’s medical marijuana program suffer from serious illnesses like debilitating seizures and cancer, said April Hutcheson, a spokeswoman with the Department of Health.

For children, medical marijuana is purchased and administered by caregivers — a person 21 or older, who is a parent, legal guardian or spouse of a patient. Caregivers must register with the Department of Health and complete a criminal history background check.

And caregivers can also be designated by adult patients who are homebound.

Use by children is somewhat complicated by their required attendance at schools, places where marijuana use has historically been prohibited, maligned and discouraged.

But both the state departments of Health and Education support a “Safe Harbor Letter,” which calls for the allowance of a caregiver to administer medical marijuana to a child on school property, as long as it does not cause a distraction for other students.

Under that recommendation, students themselves may not possess medical marijuana on school property, but visiting caregivers can administer the drug in a secure, private location.

That is only after a school principal is provided with a copy of the Safe Harbor Letter and is notified of “each instance in which the parent or caregiver will administer the medical marijuana,” according to the Department of Health.

A principal is then supposed to notify a school nurse about each of those instances.

“I know it’s a topic of review,” she said. “We don’t have anything formal in place as of yet.”

In Hollidaysburg Area School District, the situation is much the same, Superintendent Robert Gildea said, noting no policy has been adopted.

“We’re prepared to follow the advice of the solicitor,” he said.

However, the district is in a unique situation because several medical professionals sit on the Central Cambria board, Moore said.

“We sort of defer to them on those medical issues,” he said.

Moore, who also sits on the Greater Johnstown School District Board, said he is unaware of existing medical marijuana policies in Ebensburg or Johnstown.

Pennsylvania School Boards Association officials did not return a message seeking comment for this article.

Similar complications may exist in cases where patients are prohibited from consuming marijuana as a stipulation of parole or probation or in cases when an employer disallows use of the drug, Hutcheson said.

“An employee can’t be fired for using medical marijuana, I know that,” she said.

Hutcheson shared language in existing regulations that backs her remark.

“No employer may discharge, threaten, refuse to hire or otherwise discriminate or retaliate against an employee … solely on the basis of such employee’s status as an individual who is certified to use medical marijuana,” it reads.

However, employers are not required to offer special accommodations for on-site consumption, and they are permitted to discipline employees whose use of medical marijuana results in “conduct … below the standard of care normally accepted for that position.”

Despite its complicated beginning, Boyles said prospective patients should not be discouraged from pursuing the drug, which he said has vast health benefits.

“My life has completely changed,” he said.

Serious medical conditions that qualify Pennsylvania residents for medical marijuana use, according to the state Department of Health:

– Damage to the nervous tissue