Wheels up at Roundhouse

Rally brings ‘outside eyes’ to town 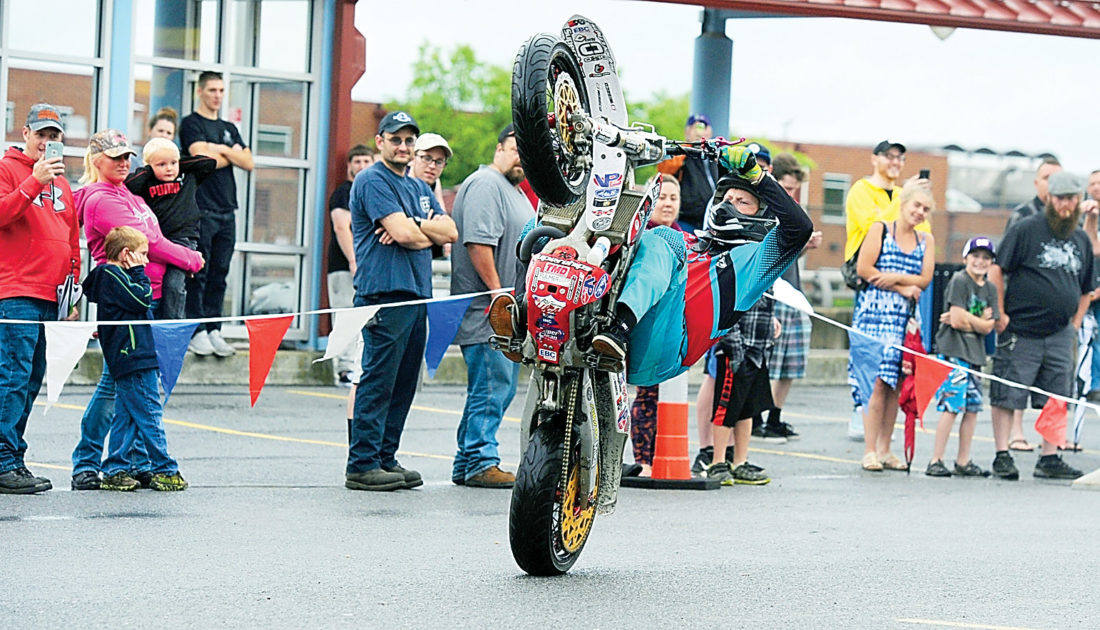 Casey Smith and his fiancee, Jessi Harris, could have watched the Matt Pletcher Trio singing on a stage in the Diamond in Hollidaysburg from their second-floor apartment Thursday.

But it was a beautiful evening, so they came out and stood on Montgomery Street, amid a few hundred others.

If the family had remained inside for the concert, one of several during the four-day, five-venue Pennsylvania Roundhouse Rally, whose inaugural effort ended Saturday, their 10-year-old son, Teaghan, wouldn’t have had the opportunity to dance in front of the stage with four buddies.

“He’s getting all his energy out,” Harris said.

The scene was convivial, with people drinking — but not rowdy.

“We feel safe,” Harris said. “We trust our son going out there.”

Nearby, Kelsey Bender of Hollidaysburg had her 16-week-old dog, Champ, on a leash.

Champ, a slender, well-behaved animal, was attracting attention from people eager to pet him.

Bender is a fan of Johnstown’s Thunder in the Valley, which also took place this weekend, but she’s pleased to have a similar event here.

There’s less walking involved with the Rally, she said.

On stage, a trio member sang, “All that’s on my mind right now /Is cheap talk and wine.”

Two musicians in the audience, Tim Boland and Lynn Rosser, both of Hollidaysburg, watched approvingly.

The Roundhouse Rally at this point probably isn’t presenting much competition for the well-established Johnstown event, according to Boland.

Still, the Rally should get plenty of patronage from local people who simply would rather not make the trip, he said.

It’s a great thing for people to come together, Paula said.

Ron, the proprietor of Professionals Auto Body, laughed and said he hesitates to come to local gatherings because people so often ask him for estimates, and he can’t turn them down.

Events like the concert, and the Rally overall, are invaluable for community development, said Steve McKnight, CEO of the Altoona-Blair County Development Corp., who was at the Diamond with Wes Burket, senior transportation planner with the Blair County Planning Commission.

“Any time you bring outside eyes into the community, it’s critical,” McKnight said.

A significant percentage of such visitors will see something they like, something to make them think they might want to move here, invest here or start a business here, he said.

If, on Thursday evening, you had to make an effort to realize you were out in the weather, on Friday afternoon, you could think of little else but the weather, due to heavy rain.

Vendors at the Railroaders Memorial Museum, the centerpiece Rally venue, were as gloomy as the elements.

By about 4 p.m. Friday, Peter Hemmerich, owner of Butt Buffer in Ephrata, had made only one sale, despite having manned his booth from the start of the Rally on Wednesday evening.

“I’ve talked to more cops than potential customers,” Hemmerich said, when asked how the sale of his motorcycle seats was going.

The weather wasn’t helping, although it wasn’t bad Wednesday evening and was positively nice on Thursday, he said.

While Friday was a washout, he was hopeful for nicer weather Saturday, which is the moneymaker for vendors at events like the Rally, Hemmerich said.

Rain is particularly damaging for motorcycle events, as the vehicles provide no protection, he said.

“I could be changing my tune,” however, if the weather improves Saturday, he said.

He was a regular vendor for several years at Thunder in the Valley, until 2015, when business worsened there — not so much for lack of attendance as lack of funds among attendees, he said.

The economic recovery that national politicians have been bragging about apparently hasn’t reached the Johnstown area, as people would tell him they had little left from their paychecks after paying bills, he said.

Hemmerich came to the Roundhouse Rally because organizers had given him “a nice deal” for the space, he said.

Things were better, but not satisfactory for Susie Campbell of Creston, Ohio, who sells clothing patches, applying them when asked.

Having set up Wednesday evening, she’d sold about $1,000 worth of merchandise by Friday afternoon, adding she was hoping for more sales.

“(But) you can’t control the weather,” she said.

Still, the Rally promoters were “awesome” — friendly and approachable, she said.

Megan Klingensmith of Butler was working a booth for Mission 22, a nonprofit dedicated to preventing suicides by veterans — 20-plus of whom on average take their own lives daily.

She was there to raise awareness and funds for the mission program, which currently helps about 100 clients.

Things weren’t going badly, despite the weather, according to Alex Castro, who was also working the booth.

And if only a few vets are helped by the group’s presence at the Rally, it’s still worth it, he said.