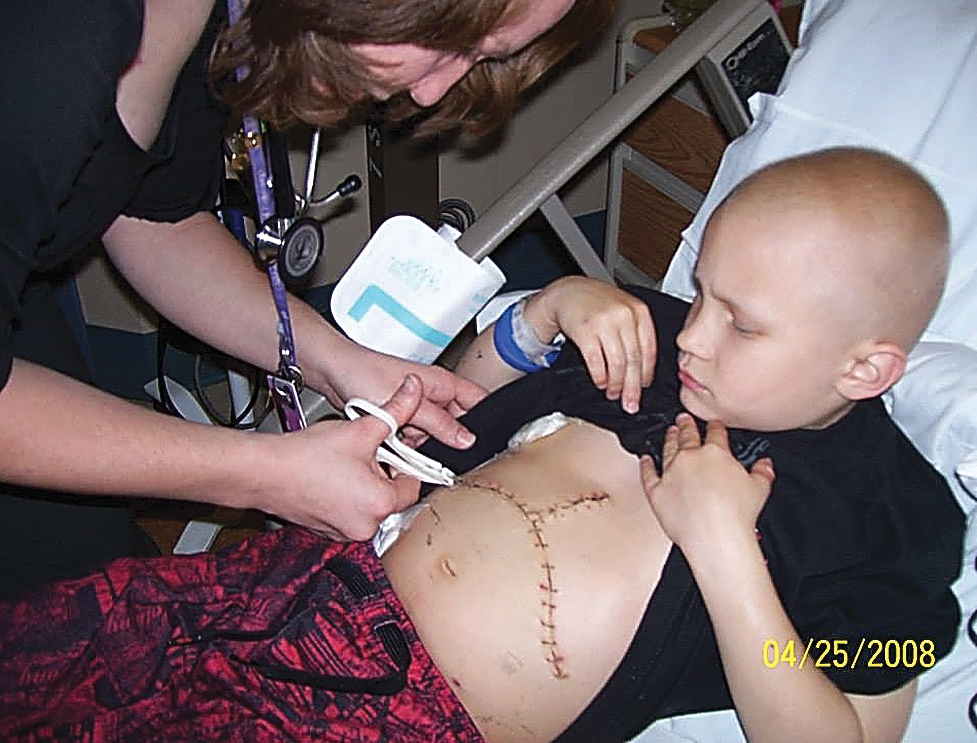 Courtesy photo / Chance Dull, a survivor of liver sarcoma, had staples removed from his stomach after his organ transplant surgery 10 years ago.

BEDFORD — A faded wishbone-shaped scar marks the stomach of recent Bedford Area High School graduate Chance Dull, a remnant of the liver transplant he had 10 years ago.

Doctors diagnosed Chance with liver sarcoma, a rare fatal cancer, when he was a young boy and told his parents his chances of survival were slim, placing Chance on the waiting list for an organ transplant.

It was during bath time in late 2007 when Trina Geisler, Chance’s mother, felt a lump in her son’s stomach, popping out of his ribs. Greg, Chance’s father who used to work as a CAT scan technician, recalled the day he saw X-ray pictures of his son’s tumor.

“Fear would be an understatement,” Greg said, his voice cracking as he recalled the “worst day of his life.”

“All of the things that lined up that day is as close to a miracle you will ever see,” Greg said of Chance’s surgery, expressing thanks to the donor family. “They’re responsible for my son being alive.”

The now 18-year-old Chance has plans to attend the physical therapy assistant program at Allegany College of Maryland and said he would like to one day take over the health club, Life Fitness Manage­ment, his father owns and operates in Cumberland, Md.

Chance has participated in a wide variety of sports since his operation — wrestling, baseball, gymnastics and football to name a few. He is in the process of becoming CrossFit certified.

“He takes care of himself so well,” Cassidy Shipley, Chance’s cousin, said. “He’s so focused on his health and being active.”

“I never thought he would go back to living a normal life, after that big of a surgery and traumatic experience of having cancer,” Shipley added. “I don’t think anybody could’ve asked for a better outcome for him. He’s very thankful for even being alive today.”

Personal experience with organ donation led Chance and his family to volunteer and campaign for the Center for Organ Recovery and Education.

There are nearly 8,000 people in Pennsylvania on the waiting list for a life-saving organ transplant, according to CORE. The organization suggests one person can save up to eight lives and help improve the quality of life for 75 people.

Due to Chance’s young age and the severity of his cancer, he was moved toward the top of the waiting list for a transplant.

The initial plan was to have Greg donate part of his liver to his son. But on April 13, 2008, Greg and Geisler learned a matching cadaver liver was available for their son. The anatomy of the person who was originally supposed to receive the donor’s organ did not match.

The family rushed to Children’s Hospital in Pittsburgh, where Chance underwent the seven-hour surgery. Shipley, who was 12 years old at the time of Chance’s surgery, remembers the staples along his stomach and the breathing tube connected to him.

Having survived cancer, Greg joked that his son seems to think he’s invincible, referring to Chance’s enjoyment of base jumping and trampolining.

“He has been doing everything when it comes to living that he’s been able to do. He approaches life that way. He, for better or worse, is somewhat fearless,” Greg said. “The things he can and the things he is capable of doing are amazing knowing what he went through just 10 years ago.”

Chance’s experiences as a cancer survivor and organ recipient seem to make him approach life from a positive perspective. Rather than explain that the wishbone-shaped scar is from a liver transplant, Chance said he likes to joke that it’s a shark bite.

Area school districts talk about how they are dealing with the reversal of the 2017 “lunch shaming law,” which ...

An East Freedom man is behind bars after police said he tried to run from officers after a traffic stop on Plank ...

A Duncansville man faces charges over an alleged assault in September that left a woman with a broken jaw. Shawn ...

Convicted murderer could get parole