Women to represent both parties in fall election for Senate 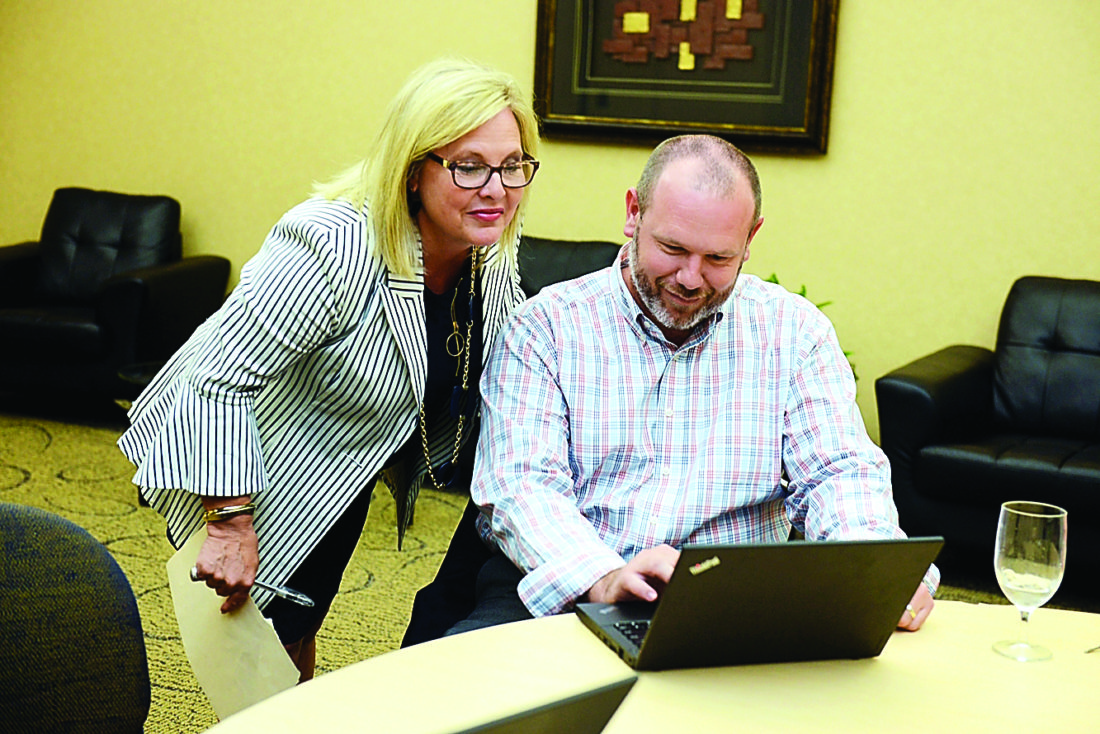 Judy Ward check election results over the should of State Rep. Jesse Topper of Bedford and Fulton Counties at the Blair County Convention Center Tuesday night

While Ward may be the first female to win a contested race in the 30th District, she will face Democrat Emily Garbuny Best in the fall.

Ward, 58, a former nurse, accepted the Republican nomination by graciously thanking those who she said volunteered to put out yard signs and work the polls on a very sunny and hot day that led to many sunburns among her supporters.

As she addressed the crowd at the Blair County Convention Center, Ward quoted Bear Bryant, the legendary Alabama football coach, who said a team wins, when it “shows class, has pride and shows character.”

Then she acknowledged her winning was all about her team that included her husband. Bill. and her two sons, Adam and Bill, and many others.

“This would not have happened without a team of people. There is no ‘I’ in team,” she said.

In her campaign Ward listed many issues that must be addressed.

“We must grow the economy,” she said.

On the campaign trail she said many constituents spoke to her about getting rid of the real estate tax, and she acknowledged that is an issue particularly among the farming population of her district

Michael DelGrosso, a Ward supporter and a former candidate for Congress, said he thought Ward won because she has shown “she will work for us.”

As a state representative, Ward’s focus was not only on the issues but on helping people who came to her office asking for help to resolve their problems.

“People know Judy cares about them,” he said.

Ward’s son Bill said he was very proud of his mother.

“I know the person she is. … I know she cares about people,” he said.

Son Adam was awed at the way people volunteered to work for Ward.

Kiss, 37, in his campaign talked about the necessity of reducing the corporate income tax as a way to spur job creation.

As political newcomer, Kiss said running for office was something he always wanted to do.

He said he would never have run against the incumbent senator, John H. Eichelberger Jr., but decided to jump into the race when Eichelberger announced he intended to run for Congress.

Kiss, like Ward, worked hard. Ward said it was her family who dragged her across the finish line, and Kiss pointed out that at times he was so involved in his campaign he forgot to eat and lost 15 pounds — even with all the dinners he attended.

He said he went door-to-door in Blair County, knocking on 11,000 doors.

Kiss too had a dedicated team, but in the end, he said he didn’t have Ward’s name recognition as an legislative incumbent and he said he was outspent 4-to-1, at least according to figures available as of Monday.

“I’m proud of the way we ran our campaign. We ran it the right way. We ran it with integrity,” he said.

He also said that he isn’t “going anywhere,” an indication he may give politics another go.

Both candidates had very trying election days because of the large area encompassed by the 30th District.

Kiss said he visited 25 polls over the five counties on Tuesday traveling throughout the day and arriving at his headquarters at the Buccinese Society Club in Altoona after 8 p.m.

He said he made a lot of friends, and they will continue to be his friends.

Ward also visited polls in several of the counties.