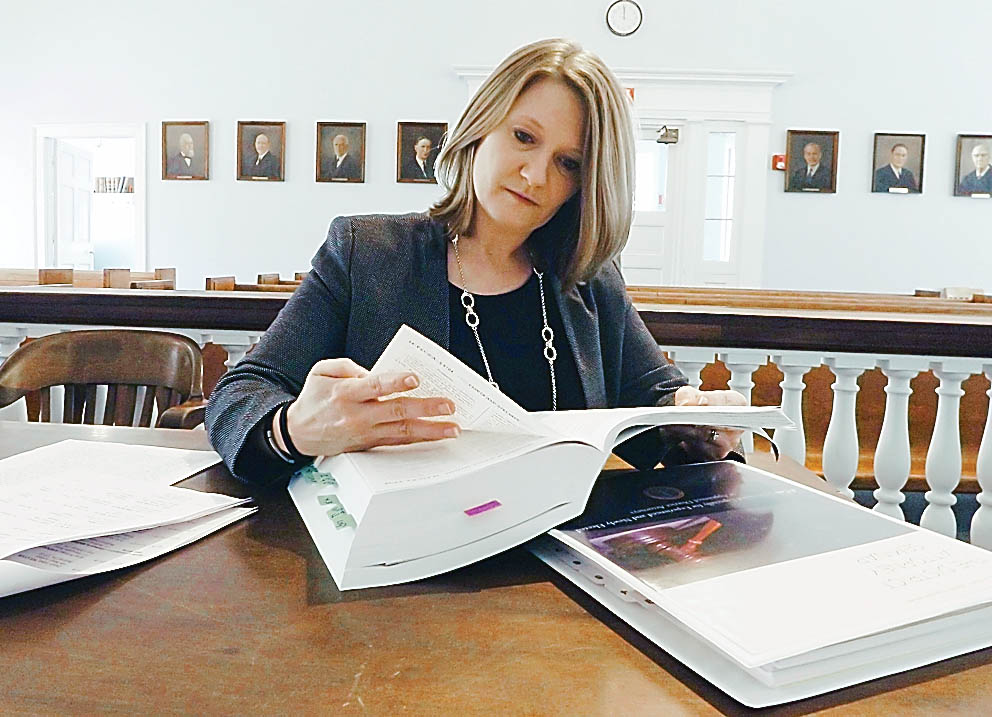 BEDFORD — Despite the hectic transition to the position of Bedford County district attorney, Lesley Childers-Potts said she is becoming more secure and confident in her new role as she continues to settle in.

Childers-Potts was sworn in as district attorney by Judge Thomas Ling on April 4, the same day former District Attorney William Higgins resigned amid allegations of helping multiple women avoid arrest and jail in exchange for sexual favors, revealing the identities of confidential informants and arranging for others to receive lenient sentences.

“I have a lot of work to do. There’s no question about that,” she added. “But I’ve been working as an attorney for a long time and been working in the criminal justice system for over 10 years. And although this isn’t the way that my 16-year-old self saw this playing out — this isn’t the way I pictured me filling this role or how it would happen — I’m determined to make it work and do my best. I’m determined to make my community proud. They deserve that.”

Brandi Robertson, a friend of Childers-Potts and a Bedford County resident, said “I know going into this endeavor and just talking with her about it, she obviously was a little nervous but determined to do the best job she could. She has a very supportive family and friends to help her get through this right now. I think she’ll do a really good job. She’s that kind of person.”

Childers-Potts served as first assistant district attorney from January 2012 until she took over as district attorney this month. She has overseen and mentored Assistant District Attorney Jonathan Thomas since he took office in 2014.

“It’s been a true honor and privilege being able to work with her,” Thomas said. “She’s been a good mentor for me since I’ve started. I always knew she was one of the people I looked up to.”

“I like the possibilities for how things will continue to proceed under her leadership,” he added. “She never really gives up, making sure that justice is done for the victims in the case and making sure the people of Bedford County are safe and that their interests are protected.”

The 41-year old DA graduated from Widener University Commonwealth Law School in 2003 and earned her law license in 2004. Childers-Potts took her first job in the field with attorney Jeff Fleming for about a year before working as a law clerk for Judge Daniel Howsare for about two years.

She then worked with the Silverman, Tokarsky and Foreman firm in Johnstown, handling domestic cases for about a year. She also worked under attorney Thomas Dickey in Altoona prior to moving back to Bedford County to become a part-time assistant public defender.

While working as assistant public defender, Childers-Potts opened a private practice in 2007, which she closed when assuming the full-time first assistant DA position.

Because Childers-Potts was born, raised and lived most of her life in Bedford County, Jayme Houck, her first cousin, said she thinks her long standing as a resident will help her as the new DA.

“What’s great about her in this position is she comes from Bedford County,” Houck said. “She can really represent the county well because she lives here and was born here. And she’s embedded in the community. She’s community-minded in what she does.”

As Childers-Potts continues her transition to the DA role, she stressed she wanted the community members to know how much she appreciates the kindness and support she’s received from them and her family.

She currently lives in the county with her husband, Trent Potts, and their two children.

“He deserves a special shout out. He has been so supportive through all this,” Childers-Potts said of her husband.