Owner Daniel Martin hopes to be back in business by Saturday 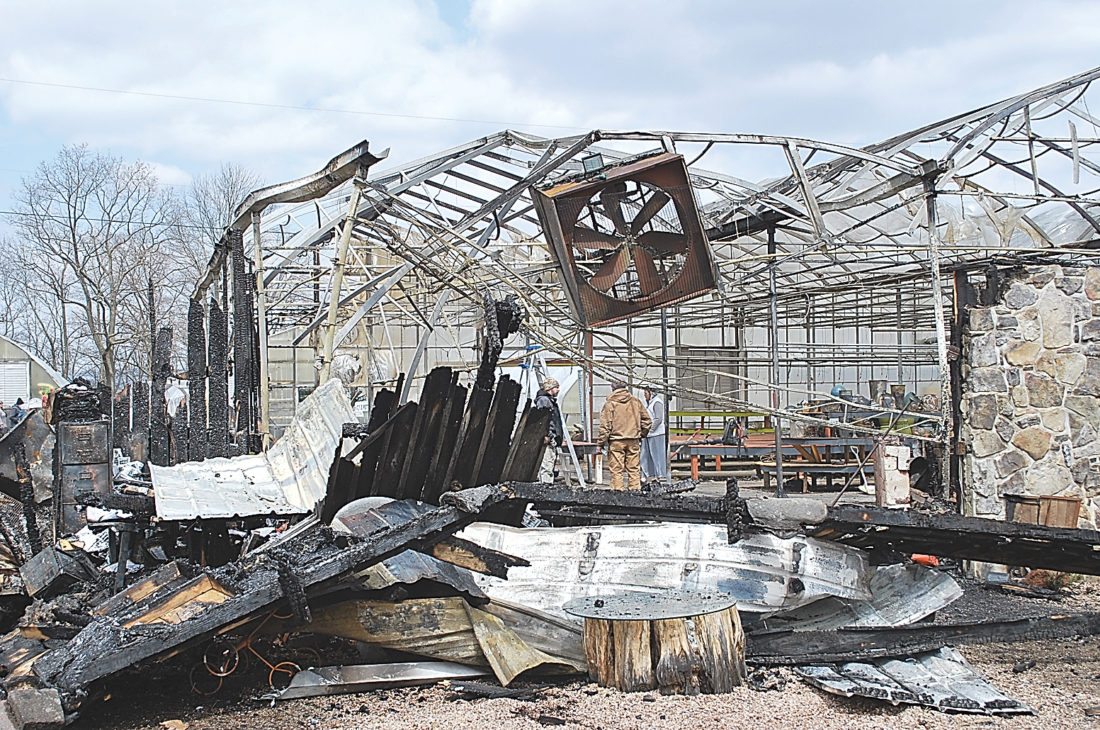 Mirror photo by Greg Bock / Family, friends and church members showed up Wednesday to help Daniel Martin clean up his family’s business, Martin’s Garden Center at 3278 Birmingham Pike. Martin said he lost between $50,0000 and $100,000 worth of inventory when Tuesday’s blaze ripped through its main retail greenhouse and adjacent storage buildings. Martin hopes to reopen by Saturday.

TYRONE — A Huntingdon County business devastated by fire expects to be open this weekend.

Daniel Martin said the family’s business, Martin’s Garden Center, 3278 Birmingham Pike, lost between $50,0000 and $100,000 worth of its inventory Tuesday night when a blaze ripped through its main retail greenhouse and adjacent storage buildings.

Martin said Wednesday afternoon that, despite the loss, the plants and flowers in the numerous greenhouses, along with trees, shrubs and landscaping materials stored outside, were not impacted. Martin hopes to be back in business on Saturday.

“We really appreciate the family and friends that have showed their support,” the 42-year-old Martin said as a small army of people, including fellow church members, worked to clean up debris. “It really means lot.”

Martin said work will continue to get the business open for the weekend and said he even sold some flowers Wednesday as customers who were not aware of the fire showed up.

Martin said the state police fire marshal had not indicated a cause of the fire but did say the extensive damage would make it difficult to pinpoint where it started.

The garden center, which sits on a former farm, gets its water from a spring-fed reservoir. Martin said the gravity-fed water line to the business may have been damaged in the fire because he had low water pressure when he arrived at the scene before firefighters arrived. Martin said he was notified of the blaze by a neighbor.

Alexandria Volunteer Fire Company Chief Tom Weyer said the call came in at 10:10 p.m., and the main building was engulfed in flames when firefighters arrived.

“There was heavy fire and smoke with three buildings fully involved,” Weyer said, adding that while firefighters were able to knock down the fire quickly, crews remained on scene until about 2:30 a.m. to put out hot spots and pull down what remained of the burned out buildings. One greenhouse, he said, suffered some heat damage.

Weyer noted firefighters shuttled water from a stream-fed hydrant at Water Street, three miles away, and fire departments from Huntingdon and Blair counties came to assist with tankers and engines.