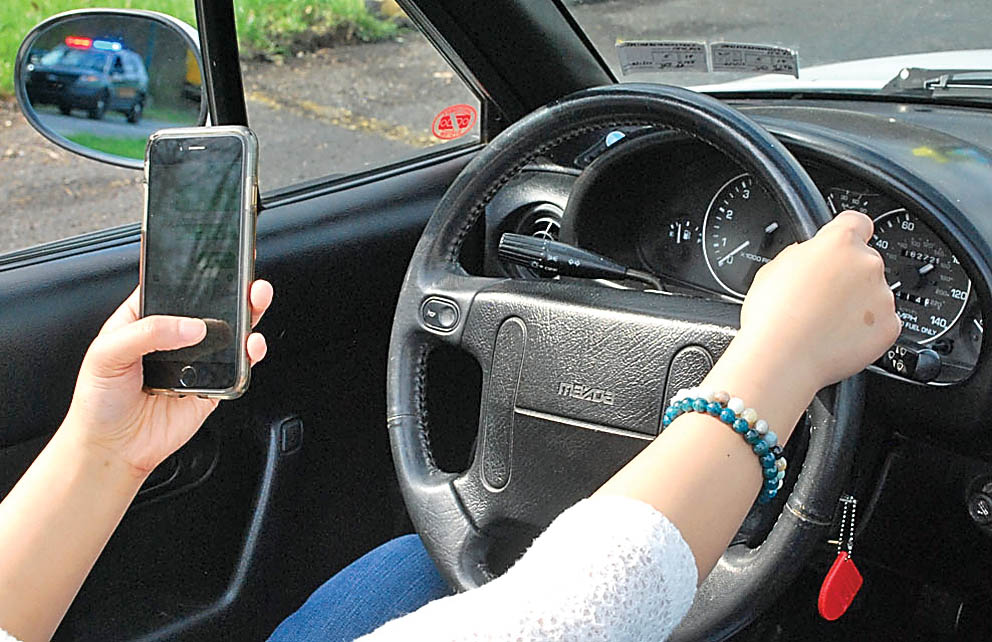 Although distracted driving citations are up statewide, numbers in Blair County dropped last year after peaking in 2016.

A look at numbers provided by the Administrative Office of Penn­syl­vania Courts show that statewide, the number of distracted driving citations jumped 52 percent in 2017, and since 2013, have increased 172 percent.

“It was good in theory, but they only came so far with that law,” Blair County Sheriff James Ott said of the Legislature, which passed a law prohibiting texting while driving. The measure was signed into law by then-Gov. Tom Corbett in 2010.

Ott said an officer may see a driver texting but it’s difficult to enforce.

“There are too many loopholes, what-ifs, gray areas and questions,” Ott said of the law, which doesn’t prohibit making calls on a handheld device. “If you say, ‘I was dialing a number,’ then it’s impossible to prove you were texting.”

Ott said if the Legislature wants to put in place a law that would eliminate the enforcement problem of the texting law, lawmakers would follow states like New York, where only hands-free communication devices are allowed while driving.

Trooper David McGarvey, spokesman for the state police Troop G in Hollidays­burg, said there were 68 incidents in Blair County involving the state police that came under the definition of distracted driving, including careless driving violations where the driver said they were distracted.

McGarvey used a fender-bender as an example, noting that if a driver rear-ended another vehicle and said he or she was looking away because of something like a phone, that would be a distracted driver citation according to the state police. The same is often applied to people wearing earphones.

“The officer would cite them for careless driving and put in the comments (on the ticket), that they were distracted and they hit the vehicle in front of them,” McGarvey said.

He said there were no state police citations for texting in 2017 in Blair County and said careless driving is usually used in those cases.

Ott has been in law enforcement for 30 years. Prior to being elected Blair County Sheriff, he was the Duncansville Borough police chief. He said he’s seen people shaving, putting on makeup and even reading newspapers while driving. Even things a lot of people don’t think about, such as adjusting the stereo or talking to their kids can be distracting. A lot of people even drive with their dogs on their lap, he said.

“I love my dog,” Ott said. “That doesn’t mean I want to have them on my lap while I drive.”

Logan Township Police Chief David Reese said that in the last six months, officers issued two citations for texting while driving and seven for careless driving. A retired state trooper, Reese said it’s easy for drivers to turn their attention away from the road.

“We really want to encourage people, while they are driving, to focus on their driving,” Reese said, adding that roadways such as Pleasant Valley Boulevard can be especially dangerous.

Statewide figures show the counties with the most distracted driving citations are in and around Pittsburgh and Philadelphia, and 55 percent of the tickets were issued by local police. Of those cited, 69 percent were male and 37 percent were in their 20s. The AOPC numbers also revealed most of the tickets were given in May and the greatest number of citations occur between 8 a.m. and noon.