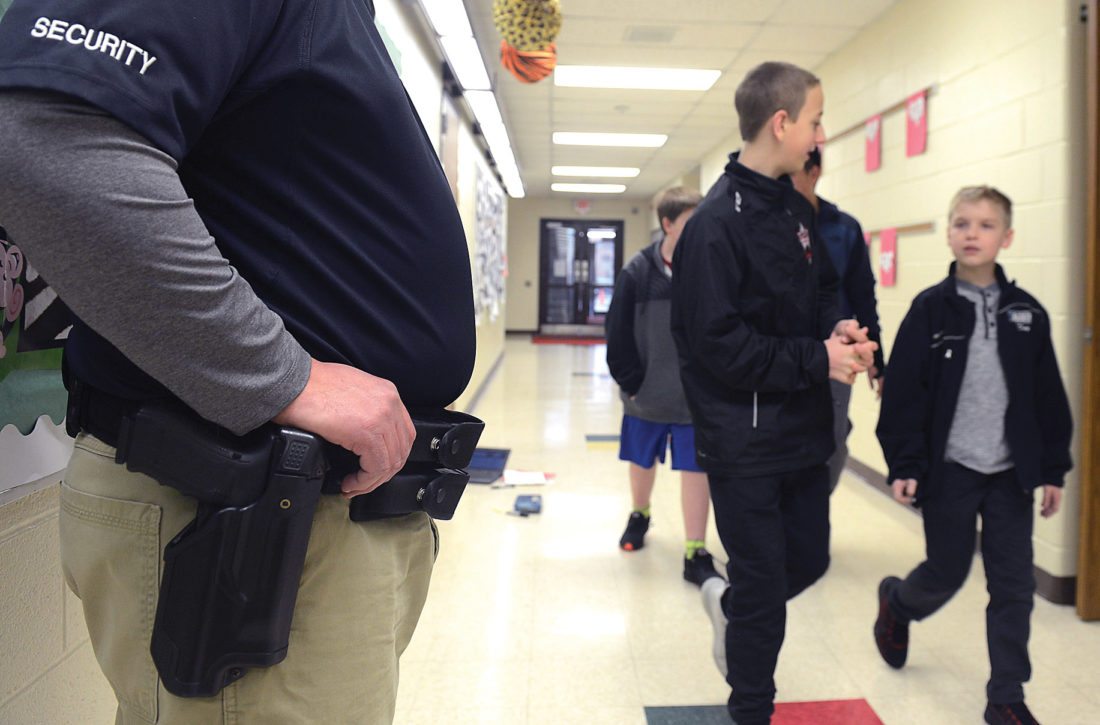 Dennis Page was teaching English on the second floor of the Altoona Area Vocational-Technical School when a teenager opened fire in a fifth-floor classroom in 1988.

No one was killed, and the student surrendered after a 30-minute standoff, the Mirror reported then.

It can happen in Altoona. And it almost has, Page said.

“I think about it when there is a school shooting,” Page said, referring to Parkland, Fla., last week.

The mass murder of 17 children in Parkland is in the minds of school officials everywhere. Many of them are dealing with copy-cat hoaxes or actual threats.

Officials of schools in Blair, Cambria, Bedford and Somerset counties worked on their emergency operations plans at the Appalachia Intermediate Unit 8 office in Altoona on Friday.

“We are constantly reacting to the rumor mill, and we have to,” said Greater Johnstown Assistant Superintendent Amy Arcurio.

Friday morning before she traveled to Altoona, she said, her high school principal and police put to rest a rumor that “someone heard, through someone else, that someone was going to bring a gun to school.”

Somerset Area School District Director of Special Programs Erick Fish said he decided to update the district’s emergency plans after a student in another Somerset County district, Shade Central City, was arrested Tuesday after being accused of planning a mass shooting.

Penn Cambria and Philipsburg-Osceola school districts were among others that investigated threats made by students last week.

His firm, Rain Public Planning, represents more than 30 years of service in Pennsylvania policing experience and has had a hand in plans for gubernatorial inaugurations and the Eric Frein manhunt.

Rain presented a workshop Friday in Altoona for schools in the region to solidify their safety plans.

Each disaster plan has a basic set “tool box,” Rain said, including detailed plans for communication, internally and with the community, as well as accounting for students. Those plans are tested with active shooter drills. Altoona Area School District launched one in the wake of the Florida shooting.

Although gun violence in school is not new, Rain sees it as a problem today.

“What about our society has changed to make such callous violence appealing? I think getting fame and noteworthiness is so big with the current generation. They seem to have a bent that ‘I can’t be famous for something good, so I will lash out. But what causes that?,” he asked.

Page said he believes the best thing schools could do to prevent further mass shootings is to have neighborhood schools where everyone knows each other.

“That would be ideal,” Page said. “Huge schools with 700-plus kids don’t have that adult to student contact.”

Rain said that was an interesting concept.

“Centralization certainly makes the death count higher. And with smaller groups and climate, you would have the ability to identify the psychological and spiritual problems … economics though,” he said.

There is no perfect plan, he said.

All schools can do is move their plans forward like a football team moving the ball forward 3.5 yards at a time. Rain helps officials form detailed plans that define who does what, when and why before, during and after an incident.

Employees from principals to public relations officers to teachers and school resource officers have roles in those plans.

A district’s emergency operations plans are based on a hazard and vulnerability assessment of all of its school buildings. The first 30 pages of a district’s plan is a basic overview that is available to the public. But the portion that details how to put the plan in action includes sensitive information about how an incident would be handled that districts would not want a gunman to know, Rain said.

While the statistics may be dated, the Indicators of School Crime and Safety says that between July 2012 and June 2013, there were 31 homicides of students age 5 to 18 at school or traveling to or from school. That meant an American student had less than one in a million chance of such a tragedy happening to him or her, Rain said.

“Schools are still statistically the safest place to be,” he said.

Even though school officials are in place of parents during school day, mental health services for students is wholly a parent’s decision. Schools can suggest it, but Beatty said there are no steps school officials can take if parents refuse.

“Our hands our tied,” Beatty said. But he is hopeful proposed legislation would allow schools to petition the court system get students mental health services.

A 2004 Secret Service Report, “The Safe Schools Initiative,” examined 37 assailants in school-based violence between 1974 and 2000. According to that report, 98 percent of assailants experienced or perceived loss prior to the attack; 78 percent had a history of suicidal attempts and 71 percent felt they were persecuted, bullied, threatened or assaulted by others.

“As human beings we are always looking for the one answer. Gun control, violent video games, bad parenting, blaming the schools,” Rain said. “But it’s going to be multiple things that cause this to be a problem,” he said.

Gun regulation — or proliferation among teachers — is one area where much of the debate is focused.

“I remember teachers and students had hunting rifles in their cars. I hunted,” he said.

“I don’t think anyone should have access to high-powered rifles. Guns are just too accessible,” he said.

“Thou shalt not kill has been on the books for a long time. It still happens,” he said, pointing to FBI crime statistics.

There were 15,070 total murders in 2016, according to the FBI, and more murders were committed with knives (1,604) than rifles (374). However, handguns outnumbered both categories (7,106). The rest of the total murders recorded in 2016 were perpetrated with weapons categorized by the FBI as other weapons, unknown type of firearms, shotguns, and hands and feet. (This information has been corrected since this morning’s print edition.)

“I wouldn’t be opposed to having some select people trained to have a weapon, but I don’t know any people who want to do that,” Beatty said.

The state’s teacher union is against it.

“Teachers are not trained law enforcement officers. Their job is to educate children and act as role models,” McCracken said.

“The source of this message has been located by law enforcement and we assure you that there is absolutely no immediate threat to students or faculty,” an Altoona Police Department Facebook post reads. “The safety of our children is always our No.1 priority and we cannot stress enough that there is no immediate danger in reference to this incident.”

Police notified the school district of the post Saturday evening.

The school district released a statement Sunday: “At this time, there is no immediate threat to students and staff, however the investigation is ongoing.”