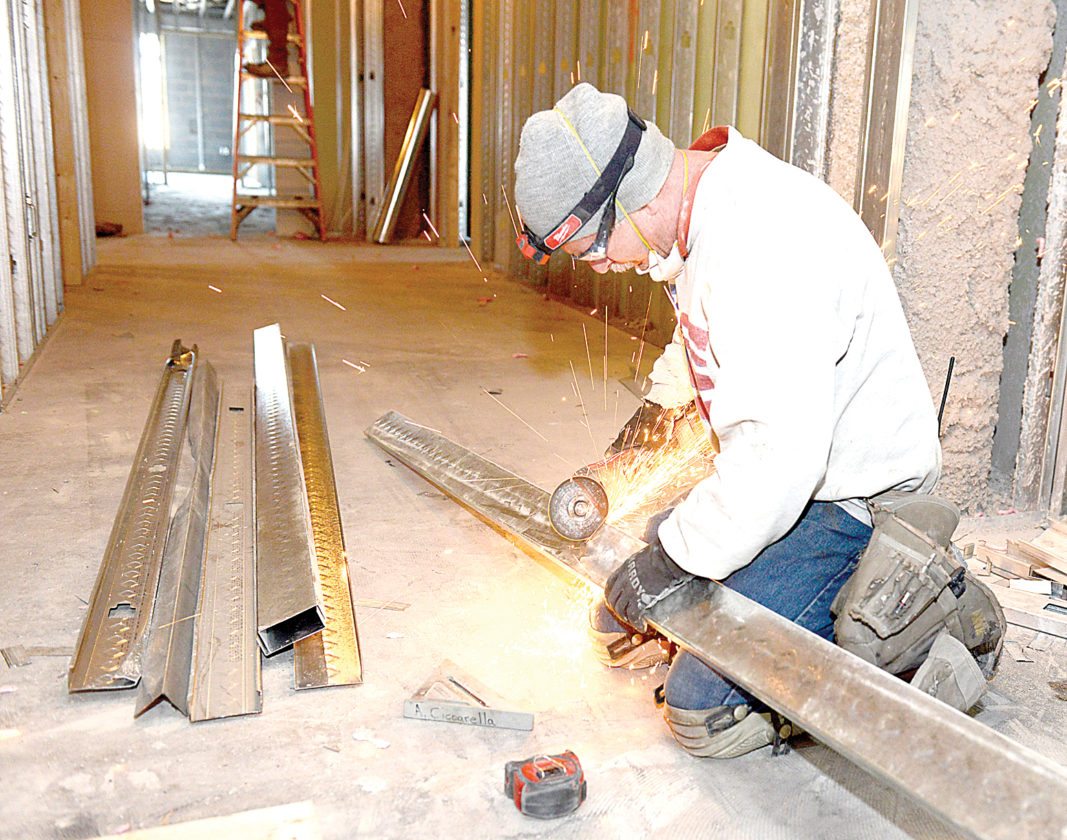 Carpenter Anthony Ciccarella cuts pieces of metal while working on a section of the hallway Wednesday for the Grande Palazzo in Altoona.

Local economic development officials said 2017 was a good year, and they are optimistic about the year ahead.

“Many businesses executed on their capital expansion plans and many more prepared to initiate projects in 2018. There is a cautious optimism in most markets. Interest in the downtown continued to grow. We hope to have several new project announcements to make that will add to the central business district renaissance which is well underway,” McKnight said.

In 2017, ABCD Corp. took part in 30 business expansion and start-up projects resulting in a total capital investment of more than $35 million. Combined, these projects resulted in 180 new jobs committed and more than 600 retained. “This impact is above what we projected for 2017, so we have much to build upon going into 2018,” McKnight said.

In 2017, several major development projects that had been in the works for the past couple of years were completed, such as three new hotels — the Wingate by Wyndham in downtown Altoona and the first dual-branded lodging facility in the state with the Fairfield Inn & TownePlace Suites. Central States Manufacturing began operations in the Martin J. Marasco Business Park in Claysburg and the new Sheetz Office complex there is also nearing completion, which will help to consolidate many of its finance, marketing and administration services.

McKnight is optimistic about the year ahead.

“There is some level of caution as the stock market continues to soar, but most experts we have consulted see solid market fundamentals like profits, sales and wage growth in place. That’s not to say things can change quickly, but already there are several expansion projects in the works along with some potentially major new investments to announce,” McKnight said.

“A large percentage of the large buildings and industrial properties in the county are back in productive use, including staffing up for ACPI, the opening of Curbs Plus in Mount Union, the opening of Sav-A-Lot in the former Bi-Lo building in Huntingdon Plaza, with extensive renovations, and the purchase and renovations of the former US Sports Building by Struck Properties LLC,” Reitman said.

The DuBois Business College building closing was just announced, and the building will become an events center as well as supplying office space for community businesses and organizations, Reitman said.

In 2017, loan packages totaling more than $1 million were funded with more than 60 direct jobs to be created, and more retained, Reitman said.

Several projects are in the works.

“We have a good number of projects in process, and continue to facilitate opportunities for our outstanding buildings/properties, including the former Warnaco building, the large former Parks Furniture building downtown and Riverview Business Center. The Parks building will give its next occupant an opportunity to transform downtown Huntingdon to a captive market and will help the walkability throughout the town of Huntingdon,” Reitman said.

“Our unemployment rate dropped, our business community made significant investments and our economy continued to diversify,” Slayton said. “We had a very active year partnering with regional and state loan programs. Through these programs, BCDA assisted a wide variety of Bedford County businesses to access low-interest money. Between 2016 and 2017, 14 businesses have secured nearly $5 million in public loan programs.”

Lampire Biological Laboratories continued its growth in Bedford County at its bioprocessing lab facility and its 450-acre “pharm” campus, enabling expanded production in the antibody arena. The Omni Bedford Springs Resort completed construction of its new $2.5 million Clubhouse at the Old Course and experienced its highest occupancy and best year since reopening 10 years ago, Slayton said.

Heritage Resort made significant investments in its popular campground facilities located on Raystown Lake. Bedford Candies broke ground on its new $1 million manufacturing/warehouse to better serve customers at its Bedford and Altoona locations, she added.

Two of the county’s largest industrial buildings, which had been vacant for years, were purchased in 2017.

Rockland’s acquisition of the former Cannondale facility in Bedford Township and Green Leaf Medical’s purchase of the former Seton building in Saxton will enable those companies to have space for long-term growth, Slayton said.

Marketing an 80-acre lot in Business Park II is a top priority for 2018.

“We are eager to recruit a significant job creator, and we have an aggressive marketing plan in place. The site is fully permitted, pad ready, designated as a Keystone Opportunity Zone and 2 miles from major interstates. As we see strong demand in eastern Pennsylvania, attractive sites are becoming limited and the labor force is tightening. As a result, site selectors are moving westward,” Slayton said.

“We made it a point to get out and meet with local companies and did some out of the area recruitment as well. We were able to meet with local manufacturers to see what is going on. We met with 155 local businesses. What we found was that 98 percent of the 155 companies said they were stable or in a growth mode, 56 percent said they were in a growth mode and only 2 percent said they had a decline,” Swales said.

A couple of major projects announced in 2016 were completed in 2017.

“Overall, we had close to $35 million in capital investment in 2017 with the projects we worked on,” Swales said.

Clearly Ahead Development is focusing on stabilization in 2018.

“We are working with a national marketing company to expand growth. We are trying to promote our Commerce Park for food manufacturing,” Swales said.

Clearly Ahead helped make the park unique as it became the first “Certified Food Site” in Pennsylvania in 2016.

Linda Thomson, president and CEO of Johnstown Area Regional Industries, said 2017 was a better year than 2016 in Cambria County.

“We experienced more companies starting up and growing via new investments in growth strategies than in the three or four previous years. There were more companies visiting the county and region, both domestic and international. Overall, activity was stronger. We also saw less layoffs from the private sector and greater job openings,” Thomson said.

“Our (Small Business Administration) Microloan Program surpassed $1 million of deployed loans to small and start-up companies; and we launched the program into Bedford County, making two key loans during the fourth quarter to Bedford companies,” Thomson said. “In addition, our Community Development Financial Institution, JARI Growth Fund, received certification by the U.S. Treasury Department and accreditation by the Pennsylvania Department of Community and Economic Development.”

For 2018, JARI plans to continue international company recruitment efforts along with active partnering with specific clusters in certain countries.

“Domestically, we have identified targeted industry sectors for recruitment activity. In addition, we see continued growth of our small business financing hub as new capital is expected to be raised during 2018,” Thomson said.