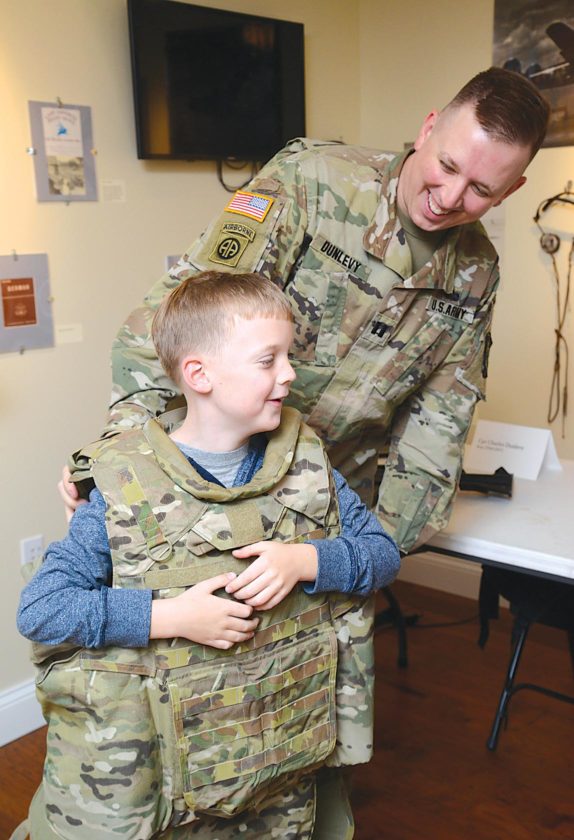 Civilians and veterans mingled in the rooms of the house-turned-museum. Photos and real correspondence between World War II soldiers and families decorated the walls.

A few people gathered in one room listened Friday as an Afghanistan War veteran and Korean War veteran swapped stories. Adam Farabaugh, 34, of Ebensburg pointed to a corner of the small room and said the grenade exploded right about there.

He was an Army infantryman in Afghanistan, the Chalk Valley to be exact, in 2011.

“That’s part of the reason we drink beer a lot,” Farabaugh joked. He considers himself incredibly lucky to be alive. There’s shrapnel around his heart and also visibly working its way out from under his skin on his limbs.

Young, who served in the Korean War in 1954, looked around at the photos and the various pieces of uniforms and equipment in the room.

“I’m just flooded with recollections of the things I’ve used or seen,” he said.

A World War II veteran made an appearance, as well as at least one Vietnam veteran. Children and families walked through the museum and spoke with the

The intimate environment in the museum facilitated the story-telling, which was the goal, said Saint Francis history professor Sarah Myers.

The small museum on St. Mary’s Street was opened last year, and the collection of items was donated by Joe Keirn, a career military man.

“We thought it would be perfect for people to talk to people in the conflicts,” Myers said. “We wanted people to hear the different stories from people who experienced it.”