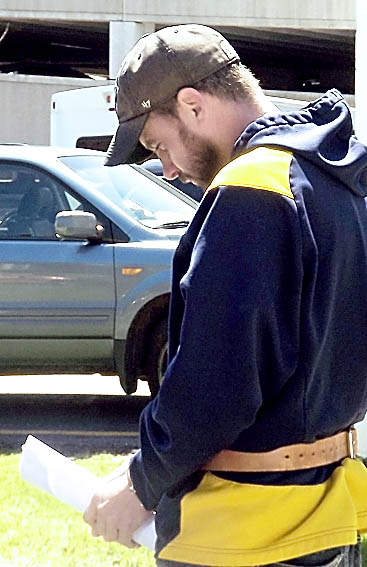 Altoona police Sgt. Matthew Starr is led from District Court in Hollidaysburg by state police investigators after his arrest Tuesday on a list of felony charges, including theft and falsifying public records. Mirror photo by Greg Bock

An Altoona police sergeant is in jail after a state police investigation alleged he falsified records and stole thousands of dollars.

Matthew S. Starr, 39, of 2300 block of 16th Avenue, was taken into custody by state troopers Tuesday and arraigned on 10 felony charges that include dealing in proceeds of illegal activity, deceptive business practices, tampering with public records and theft, along with a misdemeanor theft count.

According to state police in a 33-page criminal complaint filed Tuesday, Starr is accused of soliciting money from private businesses, friends and organizations under the auspices that the money was going to be used by the police department.

Instead, police said Starr intended to use the money for himself while racking up huge losses at Rocky Gap Casino in Flintstone, Md.

Police said Starr also padded his police overtime to the tune of $8,920.02, at $45.49 per hour. State police said casino records often put Starr at the tables when city records had him as working.

Other times, he was shown to be playing table games within minutes of clocking out of work, even though the casino is 70 miles away.

Adding to Starr’s gambling totals is the amount he played and lost at The Rivers Casino in Pittsburgh.

Starr is accused of funneling city Community Development Block Grant money into his own pocket in 2015 by inflating the price of a firearms training system and then using a local gun shop to unwittingly launder the money.

In Starr’s alleged scheme, he falsified documents to have the city pay $7,654 for a Beamhit 390 system even though it actually only sells for $1,290, what state police point out is a 493 percent markup.

Starr then duped a local gun shop into laundering the money, telling the owner he would be acting as a broker due to regulations. Starr allegedly faked a bid from the gun shop without the owner’s knowledge to get the CDBG money and then had the shop write him the check for $7,454, minus the shop’s $200 broker fee. No system was actually purchased with the grant money.

State police said Starr then bought one of the systems and ultimately sold it through his personal Facebook page for $8,056 — giving Starr a $6,100 profit from the sale.

The investigation also revealed Starr used a business called J&A Tactical to carry out the scheme as well as get credit, despite the state Department of Revenue having closed out the business in the first quarter of 2013. Starr allegedly never reported the profits from sale of system on his taxes, police said.

The investigation into Starr started when Freehling called state police on Feb. 21 after two checks from St. Stanislaus Kostka Brotherhood and one from Thompson Pharmacy were reported by Altoona Roman Catholic Federal Credit Union to city’s solicitors Larry Clapper and Dan Stants as having been cashed by Starr in 2016.

State police noted Starr endorsed the Thompson Pharmacy check and was stamped “For Deposit Only” on Jan. 21, but Freehling was not aware of the checks. Freehling told state police investigators that the checks should have been deposited into an account belonging to the city of Altoona and it was not policy for officers to handle checks as Starr did.

Starr deposited the checks in his own account at the ARC Federal Credit Union, police allege.

The state police investigation showed that within four hours of depositing the $2,000 check into his personal bank account on Aug. 24, 2016, Starr was gambling at the Rocky Gap Casino.

Police also accuse Starr of pilfering money from a Gofundme account set up to help his girlfriend’s brother with medical expenses in June 2016. Police said Starr used $3,180 of the $3,465 from that account and then tried to cover it up by soliciting money from other individuals, all the while wagering $29,978.75 at Rocky Gap Casino in June of last year.

Starr, who was brought before Magisterial District Judge Paula Aigner in handcuffs attached to a leather waist band, is due to appear before Judge Aigner on May 23 for a preliminary hearing on the charges.

Aigner said in her time as a District Judge, “there have been a lot of defendants where it was obvious how I would set bail.

“This is not one of those times,” Aigner said before saying she would go with the recommendation of the commonwealth and set bail at $250,000 cash.

Freehling said Tuesday she didn’t want to comment because she had not had a chance to read through the charges completely.

“As you can imagine, this is a very difficult time for the Altoona Police Department,” Freehling said. “However, the men and women of APD are dedicated to serving the public in a professional manner and will continue to do so.”

City Manager Marla Marcinko had no comment about the situation, saying it’s an “ongoing personnel matter.”

Council members’ comments in the media could jeopardize council’s prerogative to hold a hearing on Starr’s continuing in his job, should Starr ask for a hearing, according to Councilman Michael Haire.

A comment could show prejudgment, making a council member vulnerable to being disqualified from participating, and if four members were disqualified, there would be no possibility of a majority of the seven members ruling on the case, Haire said.

Council has not been presented any investigation results, said Councilman Dave Butterbaugh.

“Council on purpose needs to steer clear of any involvement,” Butterbaugh said.

There’s also the possibility that council comments could have an influence on an eventual lawsuit, according to Haire and Butterbaugh.

“It could hurt the taxpayers,” Butterbaugh said.

“We can’t have any elected officials showing bias,” Butterbaugh said.