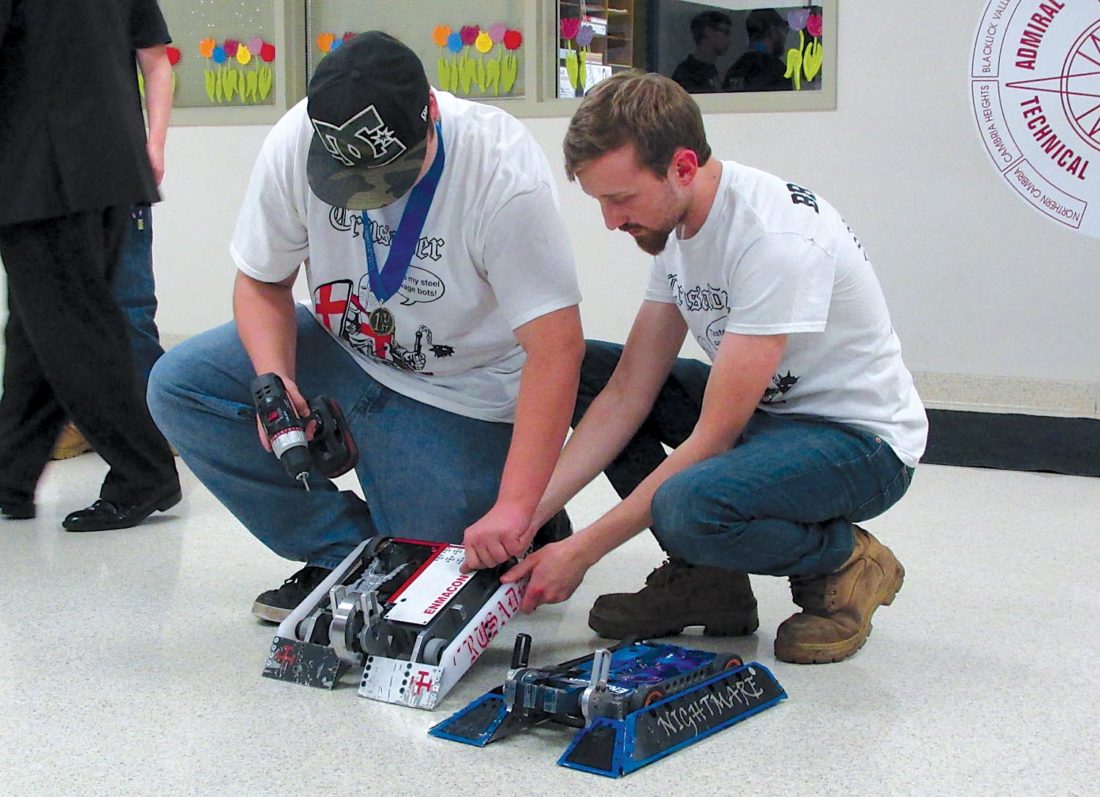 EBENSBURG — Two robots displayed spinning blades before accelerating to smash into one another Friday inside a local school’s lobby.

No, Cambria County was not the setting of the latest Transfor­­mers film. The robotics display was a celebration of Admiral Peary Area Vocational-Technical School students, who proved they’re the best at building robots designed to pulverize other robots.

During the competition students used remote-control robots to battle robots controlled by teams from other schools. A team wins when it disables or destroys the other team’s bot, Dolges said.

Students from 62 schools competed with 80 individual robots, he said.

But before they could compete, students had to build their bots, which provided a learning experience, Dolges said.

“We design and fabricate many of the parts,” he said, explaining engineering and construction of the robots also is completed by students.

The popular class has become a tool to get students interested in science- and math-related courses, Dolges said.

Robot construction costs about $1,200 — paid for by a combination of budgeted funds, grants and fundraising donations, Dolges said.

Admiral Peary Executive Director Ken Jubas pointed out the school’s teams have placed in the competition over the past eight years.

“Every year, we get better,” Jubas said.

For the first-place win, team Crusader was awarded $1,000 — which will go back into the program — as well as a chance to compete in the National Robotics League Competition later this month at California Univer­sity of Pennsylvania.

Cambria County President Commissioner Thomas Chernisky attended a presentation Friday at the school, where he honored the students for their achievements.

Crusader’s captain Travis Brothers, a senior at the school, said he thinks his robot has a good chance to win at the national level.

But he admits some teams were close to defeating the Admiral Peary bot earlier this year.

“They tossed us around pretty good,” he said.

Win or lose, Brothers said the opportunity to build and operate the robots has been a welcome learning experience.

“It’s a lot of fun because we not only get to learn, we get to do a lot of hands-on work,” he said.