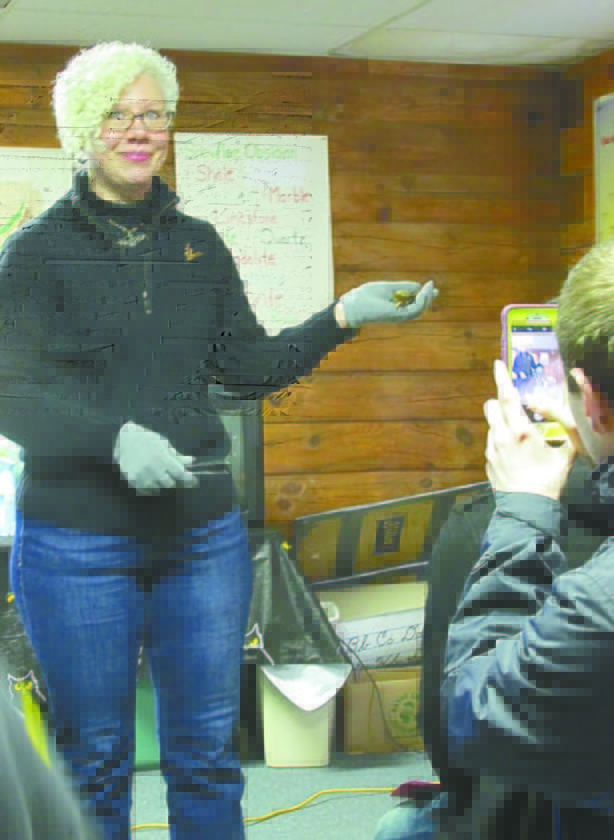 HUNTINGDON — Flying mammals and a fungus that has decimated their local populations were chief among topics Saturday at Huntingdon County’s Lincoln Caverns where dozens gathered for the annual Batfest event.

The event, in its 11th year, is intended to give those in attendance access to experts, activities and information to increase awareness about Pennsylvania’s bats and the struggles they face, said Patricia Ann Dunlavy, Lincoln Caverns’ president and general manager.

“I just personally love bats,” she said, noting they once heavily populated the caverns.

However, on Friday, Dunlavy said a disease called white-nose syndrome has destroyed much of that bat population.

“We’re going to be lucky if we see one tomorrow,” she said.

White-nose syndrome, a fungus that grows on bats’ noses and wings, has been present in the state for nearly a decade, said Clayton Lutz, a wildlife diversity biologist with the state Game Commission.

While some bat species fly elsewhere during the winter months, many Pennsylvania species hibernate in area mines and caves, Lutz said.

Because the white-nose fungus thrives in cool temperatures like those found in caves, hibernating bats become extremely susceptible to the disease, he said.

Lutz pointed to a local hibernation site at Canoe Creek State Park. Once the site served thousands of bats, but, after white-nose, that number dropped to “only a few,” he said.

“This is a site that had 30,000 bats in 2007,” Lutz said, explaining the disease has made its way across the country and has killed millions of bats of various species.

“We had no idea what it was at first,” Lutz said. “It was really an epidemic. It happened really quickly.”

White-nose can be spread from bat to bat and from contaminated environments to bats, but humans can also spread the disease, he said. In fact, white-nose likely first arrived in the United States from Europe on traveling cavers’ equipment, Lutz said.

“Human beings have a history of screwing things up,” he said.

And if they wake during hibernation, they risk using up needed stored energy that is intended to get them through the winter, he said.

Disease studies, as well as experiments with chemical and biological treatments for the fungus, were also discussed. Still, Lutz urged those in attendance to help with the bat population recovery effort.

“Really limit access to cave and mines during winter so not to disturb bats,” he said, revealing gates have been put up at many known hibernation sites to limit human intrusion.

Even then many bats are in danger, he said, listing other man-made detriments, including mining operations, windmills and even vehicles.

“It’s great that many of the populations haven’t gone to zero, but some have,” Lutz said.

Robyn Graboski, director of Centre Wildlife Care, also was on hand to talk about bat rehabilitation at her center in Port Matilda. There, many of Pennsylvania’s nine bat species have been seen, she said.

Graboski also talked at length about threats to bats and the rehabilitation work necessary to reintroduce them to the wild.

Rehabilitation, she said, is important as bats are slow to repopulate.

“Bats, in general, only have babies once a year,” Graboski said, and most care for only one pup.

If an injured bat is found, it should be handled carefully only with gloved hands, Graboski said. That is to prevent bites.

Rabies is rare, but if a bat bites a person, it often has to be tested for the disease, she said. Bats must be killed to be tested.

“We don’t want them to be euthanized and tested,” Graboski said.

Eventually, Graboski presented a rehabilitated bat named Betsy to the crowd. Though Betsy is of the big brown bat species, she was small enough to fit inside Graboski’s palm.

Graboski echoed Lutz’s earlier requests to those in attendance, urging them to be careful not to spread white-nose to additional hibernation sites.

“Once the cave is infected, it’s always there,” she said, adding returning bats can be reinfected each year. “We’ve lost about 90 percent of our bats.”

Batfest lasted throughout the remainder of the day with numerous activities planned, including a cavern tour. Dunlavy said about 45 people were scheduled to attend this years event.

Sara Klimek, a high school senior from Connecticut and her mother, Sue, took advantage of the bat-centric event while visiting nearby Juniata College.

“Every once in awhile, we’ll try to do the nature centers,” Sue said.

Patti Shaffer said she traveled more than an hour from Luthersburg, though she admitted she was slightly afraid of bats in flight. But her love of animals trumped that fear.

“I’ve never been to Lincoln Caverns before, and I like animals, so I thought it would be good to learn about the bats,” she said.

Not everyone was new to the caverns or even the event. Dory Ross and her 10-year-old daughter, Natasha, said they had attended Batfest previously. Natasha said she likes to hear about the bats but is upset by their recent population decline.

“It’s very sad,” she said, explaining they are important parts of the environment. “They help with all the bugs.”