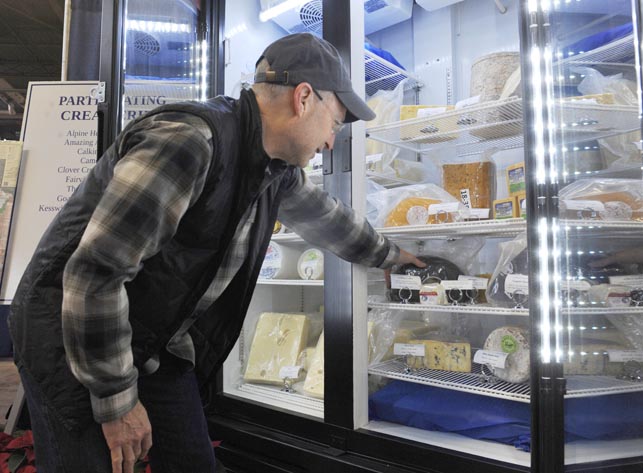 Mirror photo by Gary M. Baranec Steve Loevner of Pittsburgh places samples of his prize-winning cheeses in a display case at the Pennsylvania Farm Show in Harrisburg.

The entries come primarily from small cheesemakers, many of whom are members of the Pennsylvania Cheese Guild, created in October 2015 by a group of cheesemakers, retailers, scientists and supporters of the cheese community in the state.

The guild promotes the highest standards of cheesemaking and celebrates the diversity of the cheese community in Pennsylvania through partnerships, outreach and education, according to its website.

“Our purpose is to educate the public and foster new cheesemakers, the different types that people do,” said Executive Director Donna Levitsky.

Today, the guild has about 25 cheesemaker members, six associate members such as Kerry Kaylegian, dairy foods research and extension associate with the Penn State College of Agricultural Sciences, who is the head coordinator for the cheese competition, and about a dozen “enthusiasts” who receive the guild’s newsletter, Levitsky said.

“We try to educate the public about the value of cheese as a food. We support local small-scale cheesemakers and try to inspire up-and-coming cheesemakers and support artisan cheesemakers,” said Sollenberger, owner of Hidden Hills Dairy, Everett.

“We are trying to get cheesemakers to work together and to work on issues with food safety and regulations,” said Rice, co-owner of Clover Creek Cheese Cellar, Williamsburg.

The guild is open to any cheesemaker.

“We are open to anyone, but we are going in the direction of the small artisan cheesemakers, the ones who are making cheese in cellars, small cheese rooms or even refrigerators,” Levitsky said.

Sollenberger said she started making cheese in 2001 but “got serious” in 2005.

“We use raw milk and make hard aged cheeses. If you use raw milk, you need to age the cheese at least 60 days at above 35 degrees. I make Dutch-style cheeses such as goudas, alpine cheese and feta cheese,” Sollenberger said.

“Gouda-style cheeses are our most popular, as well as cheddar. We use our own milk. We are one of the few 100-percent grass-fed cheesemakers around,” said Rice, who is the only farmstead artisan cheesemaker in Blair County.

Rice sells his products at local farmers markets, his farm and at Friends Farm near Williamsburg, Way Fruit Farm near Stormstown and Wholesome Living Marketplace in Bedford.

“We are a farmstead cheesemaker. We have a herd of dairy goats and bring in some cows, as well. We make cheese on our farm,” Steve Loevner said. “The craft of making the cheese involves a lifetime of learning and the challenge of running a business.”

Loevner said his cheese products are sold mostly in the Pittsburgh area to local restaurants and Giant Eagle stores.

“We are also starting to sell  in the Philadelphia area,” Loevner said.

The farm show continues through Sunday at the Pennsylvania Farm Show Complex and Expo Center in Harrisburg. Admission is free and parking is $15.