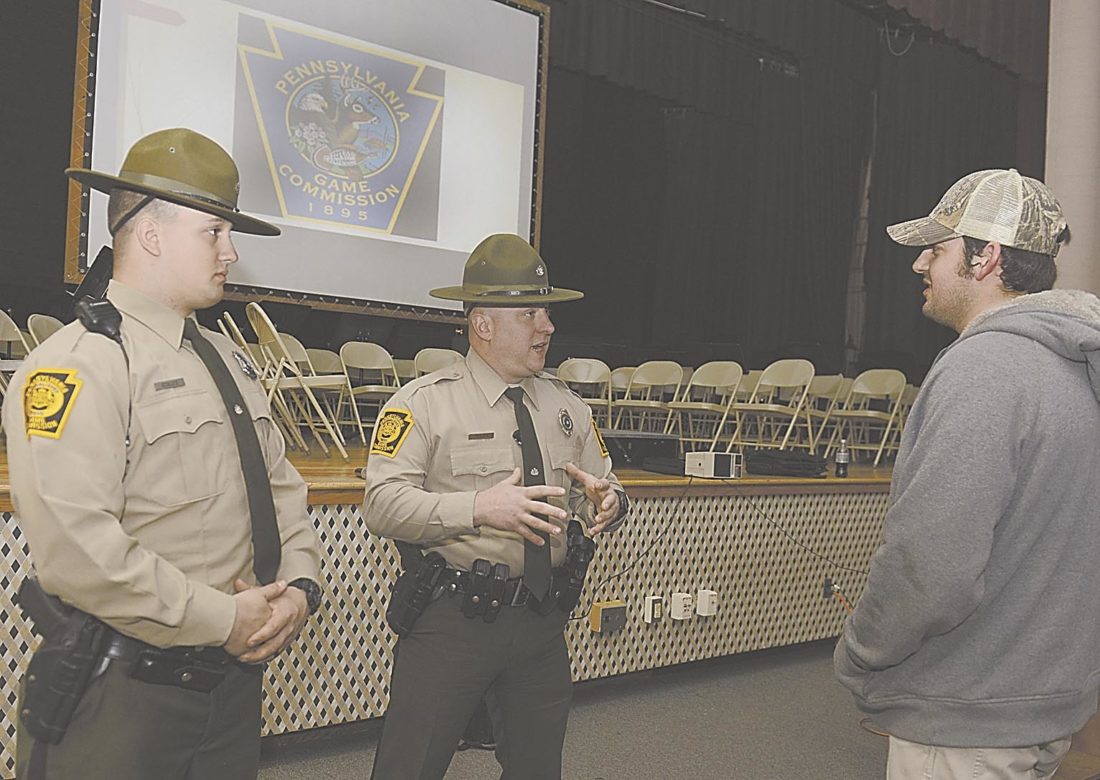 MARTINSBURG — A disease threatening the local deer population was the topic of a public seminar Friday evening in Central High School.

“This is a very important topic for a lot of people,” Eichelberger said. “Hunters and people who don’t hunt need to know about chronic wasting disease.”

Chronic wasting disease is an infectious protein, which attacks deer brains, eventually leading to a loss of motor functions and death, said Wayne Laroche, who heads the state Game Commission’s Bureau of Wildlife Management. It is similar to but not the same as mad cow disease.

The area, known as DMA 2, is the only area in the state where the disease has been detected in free-range deer, according the state Game Commission.

At the seminar, Laroche said some people still are unaware or haven’t accepted that reality.

“It’s easy to be in a state of denial,” he said, explaining the disease could be “devastating” to deer populations if left unchecked.

The disease likely got its start sometime in the 1960s at a testing facility in Colorado and went unnoticed while it spread to other locations, Laroche said. Now, it is found in numerous locations in many states across the United States.

“It’s spread out of the body from saliva, from urine, from feces,” Laroche said.

Those fluids, he said, can contaminate soils and possibly plants, though it’s unclear how easily the disease can move from those surfaces to animals, he said.

“I guess, and it’s just speculation, most of our cases are animal to animal,” he said, adding the disease also can be spread from mothers to unborn fetuses.

Laroche showed several maps with disease locations highlighted. Some of the infected areas had large gaps in between. That is likely due to contaminated deer being transported, he said.

The problem is infected deer may be hard to detect, as the disease has an “exceptionally long incubation period.”

The importance of not transporting contaminated animals or animal parts was stressed multiple times. Still, wildlife experts are looking for other solutions to eliminate the disease and stop its spreading.

So far, some scientific solutions have proven difficult, Laroche said.

“All attempts to make vaccines so far have failed,” Laroche said.

Laroche also aimed to dispel rumors about a mass culling of the deer population — a tactic he said has failed elsewhere. He also dismissed rumors of removing antler restrictions.

However, he did talk about the option of using sharpshooters to kill targeted groups of deer in areas where the disease is abundant.

A similar approach was employed in Illinois, and it has had some success at keeping the number of infected deer from rapidly increasing.

“I would like to put a research group together, so we could actually go out and try this technique,” Laroche said.

While a perfect solution has not been found, Laroche said steps need to be taken before much of the deer population is compromised.

“We risk really the future of hunting,” he said. “We could lose our populations in their entirety or huge portions of them.”

David Wolfgang, a veterinarian with the state Department of Agriculture, also spoke at the seminar.

He, too, talked about the dangers of transporting deer from farm to farm. Wolfgang gave an example of an infected deer recently discovered in Franklin County. It was once housed on a farm in Fulton County near where other infected deer have been located.

Wolfgang’s comments were summed up briefly before audience members were allowed to ask questions.

While some offered suggestions and asked thoughtful questions, one hunter in the crowd seemed to stand out.

He spoke for several minutes and criticized the proposed sharpshooter solution multiple times. The man advocated for longer hunting seasons, which he claimed would help with the spread of disease.

“Why don’t you give the hunters a chance?” he asked, repeating the phrase like a mantra.

Laroche said he was skeptical that hunters could get the job done, explaining sharpshooters likely would have a difficult time eliminating targeted groups.

“If we can’t do it with sharpshooters and at night with silencers, then we can’t expect the hunters are going to do a better job than that,” he said.