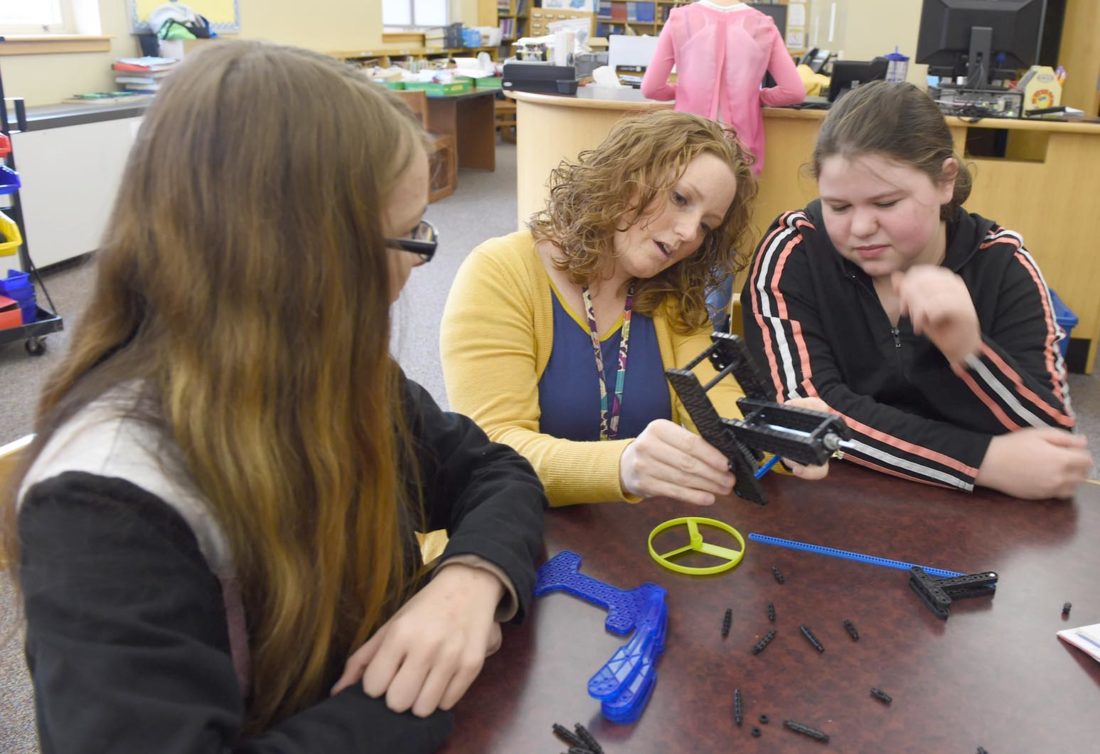 Mirror photo by J.D. Cavrich / Derek Long (left) and Jeremiah Oakes, seventh-graders, work on assembling a catapult in a makerspace at Claysburg-Kimmel High School on Friday. The Bellwood-Antis Imagination Zone makerspace cost $3,000 to $4,000, much of it covered by the district’s fundraising education foundation.

A few months ago, the word “makerspace” would have been a foreign one at just about every Blair County school.

The loosely defined, often high-tech community workspaces — a product of the freewheeling Silicon Valley computer culture — had sprung up in other cities and states over the years, but they hadn’t always made their way to old industrial centers like Altoona.

Today, two county districts boast classrooms dedicated to programming and high-tech design. By next year, one could be giving elementary-age students access to 3-D printers, vinyl cutters and laser tools — and administrators elsewhere have been asking about the concept.

“There’s a first-grade class in Pennsylvania that’s doing robotics,” said Dutch Brennan, an Altoona Area School District board member who has pushed for similar spaces in his district. “Of course, they can’t do all the algorithms that are involved in the actual programming … but everything is changing so much right now. If we just try to keep our kids locked in, once they get out into the business world, they’re not going to be able to do what they’re expected to do.” 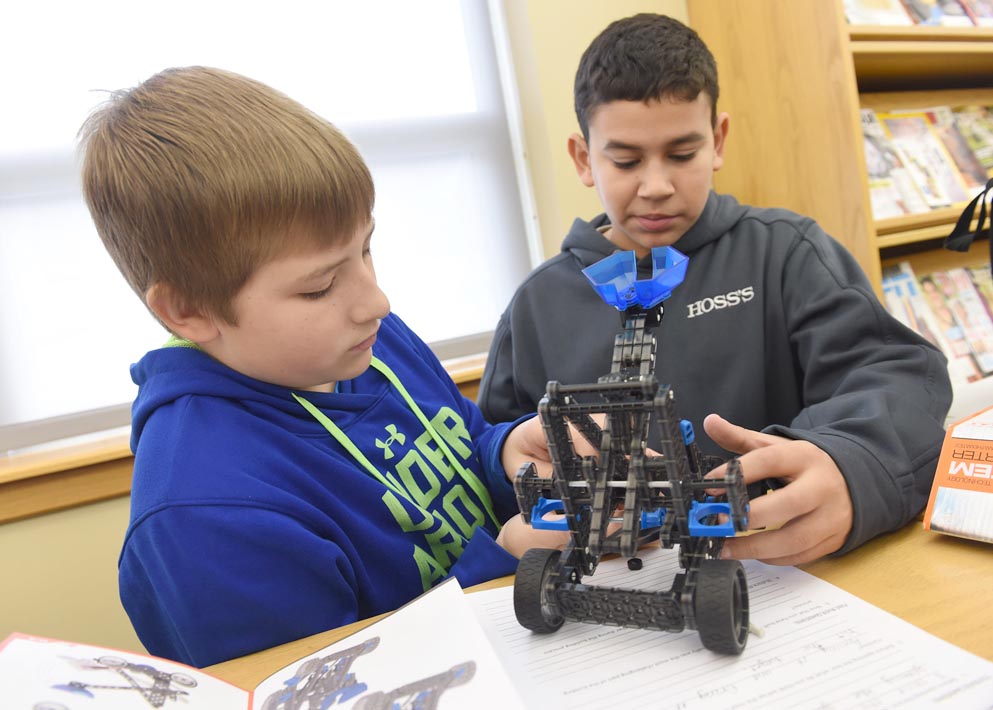 Mirror photo by J.D. Cavrich / Derek Long (left) and Jeremiah Oakes, seventh-graders, work on assembling a catapult in a makerspace at Claysburg-Kimmel High School on Friday. The Bellwood-Antis Imagination Zone makerspace cost $3,000 to $4,000, much of it covered by the district’s fundraising education foundation.

Sometimes called hackerspaces, hacklabs or similar names, makerspaces are essentially open rooms or offices where guests are free to think and build. They often house computers and sleek, modern manufacturing equipment so users can experiment with design.

They’ve popped up across the world, often in cities that attract young developers and entrepreneurs. They’re the sort of spaces one might imagine in the hip headquarters of a Silicon Valley corporation: open, stripped-down, with light pouring in and members tossing around ideas for computer programs or new products.

Makerspaces would naturally attract educators, especially with the rise of STEM, a nationwide movement to teach children science, technology, engineering and math for a high-tech future.

The addition of art to STEM — making STEAM — opens more opportunities to incorporate aesthetics and design into their learning.

In some ways, the spaces can serve a similar function to the shop classes that students have taken for decades.

But their supporters see them as more attuned to free thinking, capable of drawing several disciplines together at once.

Where a student in a 1960s shop or woodworking class might have built a shelf or an ashtray, those working in makerspaces can draft a 3-D model of a toy, then watch it form from polymers in an advanced printer.

Trexler, who first worked to found Catalyst Space in 2013, said the facilities can prepare students for a daunting future economy by teaching them to view science, technology and math cohesively.

“By 2024, 70 percent of new jobs are STEM-related. If it takes us even six years to get the makerspaces in place, our students aren’t prepared,” he said.

Trexler was more direct when he addressed the board at Claysburg-Kimmel, arguing that old learning and old career training wouldn’t cut it anymore.

“The railroad’s not coming back,” he said.

Classrooms in each grade level fight to read the most books each month. The winning class, as every child knows, gets to care for a life-size stuffed dog until the next competition concludes.

Administrators quickly found a way to incorporate the school’s brand-new makerspace — the Imagination Zone — Principal Terri Harpster said. Each class would design and build a doghouse for the stuffed animal, with teams in some classes splitting up to build a roof, siding and doorway that met their specifications.

Then, with their designs in hand, the classes built free-standing doghouses from cardboard and paper.

“You would be amazed at some of these doghouses,” Harpster said.

The Bellwood-Antis makerspace is decidedly low-tech, but it serves its purpose: to get young students thinking in terms of design and problem-solving, all interactively. The room has been a hit so far, Harpster said.

“It’s hard, even now, already, to sign out our makerspace because it’s being signed out all the time,” she said.

The room’s success has led administrators to tentatively plan a second elementary makerspace as soon as next summer. This one would be more advanced, with drafting computers, 3-D printers and laser cutters available to children just years past kindergarten.

Bellwood-Antis administrators developed the idea after touring makerspaces at Elizabeth Forward School District in Allegheny County, where students were deeply engaged in the hands-on learning the spaces offer, Harpster said.

Harpster’s isn’t the only local district to have launched makerspaces this year. At Claysburg-Kimmel High School, a full-time makerspace teacher joined the staff in time for the 2016-17 school year. Students at some grade levels take dedicated STEAM classes and learn computer coding and robotics, with the room available to other classes, as well.

“We’re trying to get back to that problem-solving, that critical thinking, that collegial work where you work in pairs,” Boyd said. “It’s creative; it’s innovative; it keeps our kids engaged.”

That engagement doesn’t come cheap. While 3-D printing and related technologies could revolutionize manufacturing in the years to come, its capacity is often outside the reach of cash-strapped rural and inner-city school districts.

The Bellwood-Antis Imagination Zone cost $3,000 to $4,000, much of it covered by the district’s fundraising education foundation, Harpster said. But the hoped-for high-tech space could run $10,000 or more, she said.

Bellwood-Antis could use Title I funding, aimed at districts with large numbers of low-income families, to cover some of the cost, Harpster explained.

Even with outside help, however, makerspaces can be a major investment. Claysburg-Kimmel had to set aside an entire teaching position for its makerspace program, and even cheap options to teach programming can become expensive in large quantities.

The state is slowly gearing up to help districts develop makerspaces or similar services, Boyd said, and the intermediate unit — which oversees districts in several counties — has established a group to plan and offer ideas to local districts. Claysburg-Kimmel also has its own outside foundation to help raise funds.

And while the programs can be expensive, Claysburg-Kimmel School Board President Jeremy Knott argued that they can ultimately save costs for districts unable to create full-fledged STEAM programs with multiple teachers.

More administrators are talking about makerspaces these days, Harpster of Bellwood-Antis said.

Amid a decades-long decline in traditional manufacturing, some supporters see the internet-connected, high-tech systems as a replacement — or at least basic training — for futuristic jobs.

That doesn’t mean they haven’t run into opposition, Brennan of the Altoona school board said.

“Whenever you get to the point of spending money on such things, that’s where you get the resistance. You get people saying, ‘Well, everything we had when I was a kid was good enough for me. Why isn’t it good enough now?'” Brennan said. “They’ll look at it as a shop kind of thing, but realistically it might be a chemistry or biology space at different points.”

Trexler, who runs the Catalyst Space in Altoona, described students who’ve spent time at his facility: One used 3-D mapping to design shoes that perfectly match the wearer’s feet, he said, while another used a miniature computer to build an automated conveyor belt.

“I think it’s going to be a huge shift,” Trexler said. “I think many parts of the country have already done it. Where it becomes a problem for places and areas like ours … We’re rural. The schools don’t communicate as easily.”

If more makerspaces take off — and if well-equipped hubs like Trexler’s serve as central points for those who can’t afford them — proponents hope they could set off a fresh interest in design and entrepreneurship in stagnant communities.

“I think that right now we’re kind of on a ramp, and we’re just sliding away,” Brennan said. “There have been leaps and bounds in the last few years. … We either get ourselves together and we get our kids the most modern techniques we can, or we’re going to find ourselves even more behind.”