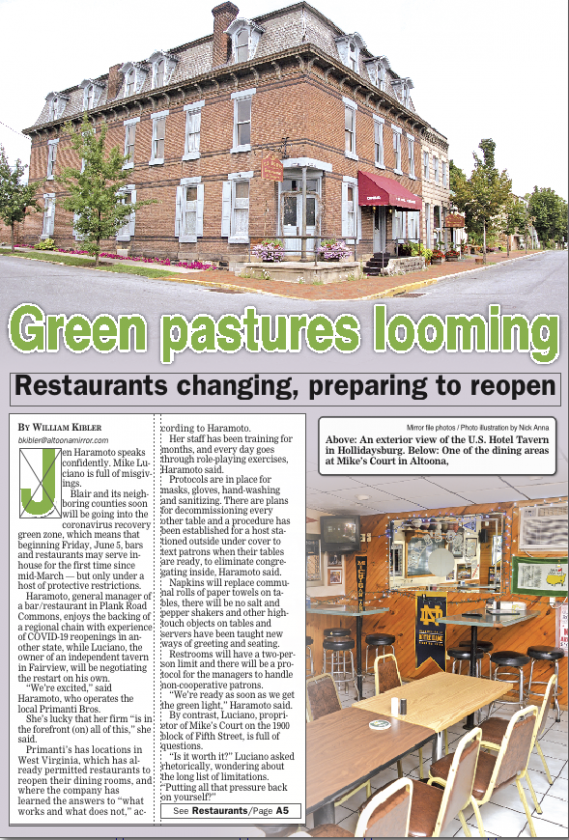 Blair and its neighboring counties soon will be going into the coronavirus recovery green zone, which means that beginning Friday, June 5, bars and restaurants may serve in-house for the first time since mid-March — but only under a host of protective restrictions.

Haramoto, general manager of a bar/restaurant in Plank Road Commons, enjoys the backing of a regional chain with experience of COVID-19 reopenings in another state, while Luciano, the owner of an independent tavern in Fairview, will be negotiating the restart on his own.

She’s lucky that her firm “is in the forefront (on) all of this,” she said.

Primanti’s has locations in West Virginia, which has already permitted restaurants to reopen their dining rooms, and where the company has learned the answers to “what works and what does not,” according to Haramoto.

Her staff has been training for months, and every day goes through role-playing exercises, Haramoto said.

Protocols are in place for masks, gloves, hand-washing and sanitizing. There are plans for decommissioning every other table and a procedure has been established for a host stationed outside under cover to text patrons when their tables are ready, to eliminate congregating inside, Haramoto said.

Napkins will replace communal rolls of paper towels on tables, there will be no salt and pepper shakers and other high-touch objects on tables and servers have been taught new ways of greeting and seating.

Restrooms will have a two-person limit and there will be a protocol for the managers to handle non-cooperative patrons.

“We’re ready as soon as we get the green light,” Haramoto said.

By contrast, Luciano, proprietor of Mike’s Court on the 1900 block of Fifth Street, is full of questions.

“Is it worth it?” Luciano asked rhetorically, wondering about the long list of limitations. “Putting all that pressure back on yourself?”

How should he handle turning someone down, he wondered, if the rules require.

“How do you handle being put under the microscope?” he asked.

It will be hard making a profit with the capacity of his small place reduced by half, in keeping with the green-zone guidelines, he said.

“The margins are tough as it is,” he said.

A big part of his attraction is sports on TV, but sports are still largely shut down.

“A sports bar with no sports,” he said ruefully.

There’s also the issue of patrons being comfortable around each other.

Luciano is disinclined to take sides.

“I’m just listening to everybody,” he said.

But he doesn’t want to put anyone at risk.

The trick will be “doing it the right way without offending anybody,” he said.

He’s asked everyone connected with his business to come up with ideas on how to handle things.

It’s likely he’ll need to decommission the middle booth of a three-booth row in one area and eliminate two of three tables in a side room, he said.

He’s become used to doing things the same way for 27 years, he said.

He may go to State College this weekend to see how restaurants there are handling the green zone, given that Centre County went to green on Friday, he said.

It’s likely he’ll take several days to develop some real plans, then open up slowly, a couple days a week, with a limited menu, to help ensure against overestimating the business he may do at first, given the unknowns.

“None of us have ever been in this before,” he said.

Not knowing in mid-March, when the state suddenly shut everything down resulted in wasted supplies, he said.

It will be “interesting,” if nothing else, according to Luciano.

The manager of the Landmark Restaurant in Bedford figures things will be OK, although there are requirements that make someone like her — steeped in restaurant traditions — uncomfortable.

One is that a designated bus person — not servers — remove dishes from tables, to eliminate the possibility of servers transferring germs from patrons to dishes, utensils and other items that are then handed to other patrons, said Cristi Gasperich.

Another is that servers shouldn’t engage too much with customers, to minimize the risk of viral transmission.

She always liked to see her servers chatting with customers about their families.

But those traditions will be gone for now.

To prepare for green, workers have been spacing out tables, which will reduce capacity.

A little-used dining room will likely be reopened, to provide more capacity.

But a salad bar won’t be set up, for now.

The staff is becoming accustomed to wearing masks and gloves.

“Friday nights are going to be the question mark,” because the restaurant tends to fill up, which may make social distancing difficult, she said.

She expects the restaurant will reopen its dining room on a slow day, so staff can get acclimated.

The workers have been getting antsy.

Once reopening begins, it will be day-to-day, with adjustments based on how things are going, she said.

In the case of an eatery on the 100 block of South Eighth Street, going to green will mean the emphatic end — or nearly the end — of in-house dining.

So closing the six-table dining area wasn’t going to be financial hardship. But it could — and ultimately did — provide impetus for a change that Patterson had long considered: turning that space into a gaming room.

“It was kind of like my kick in the butt,” Patterson said.

He plans to install skill machines, a pool table, claw machines for kids and vending machines.

He expects to make the transition by July.

He may keep a table or two for inside dining service.

The dining room was always just a “bonus” anyway, he said.

In the meantime, before creating the game room, he has no intention letting customers eat inside before the green zone makes it legal.

“I’m not going to push any buttons,” Patterson stated.

His deli is apolitical, he said.

Although closure never required that he suspend takeout and delivery, he shut down the deli altogether in mid-March.

He and his employees were all concerned about safety at that time.

“I didn’t want to force anyone,” Patterson said.

The deli restarted after 50 days three weeks ago as everyone was “itching to go back,” he said.

Since then, business has been far better than before, a phenomenon based on its being primarily a takeout-and-delivery specialist at a time when takeout and delivery were the only permissible options, he said.