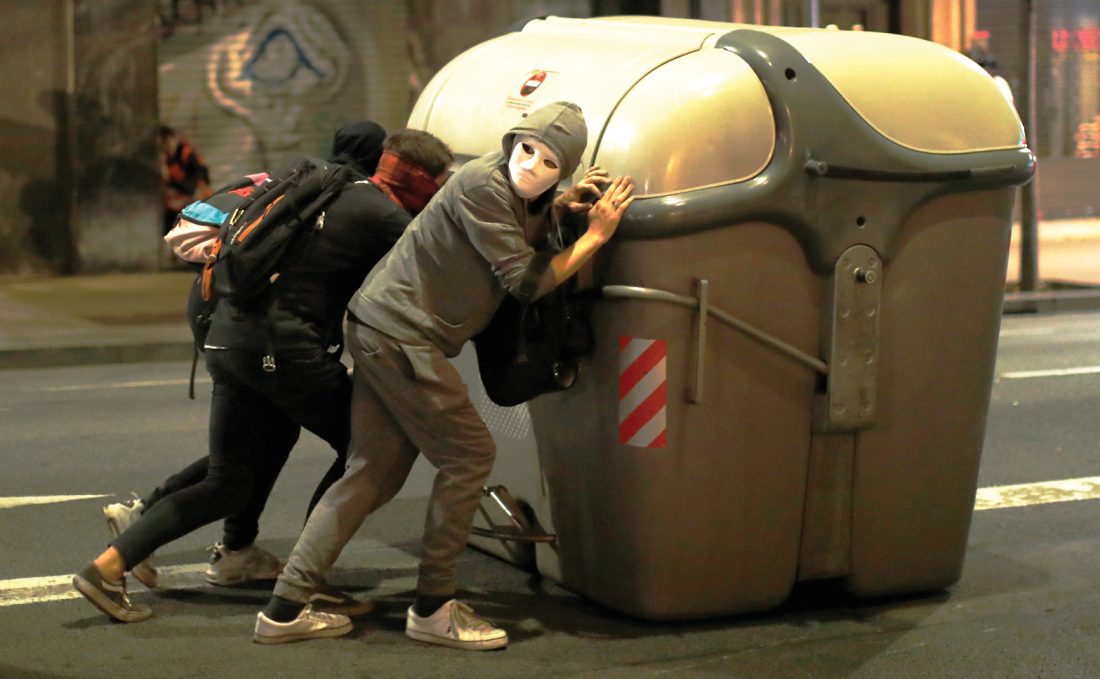 The Associated Press / Protestors push garbage containers to build a barricade across a street in Barcelona, Spain, on Thursday.

BARCELONA, Spain — For years, Catalonia’s separatist movement painstakingly built an amiable image of its quest to secede from Spain: Smiling parents and grandparents with children in tow marched under the Mediterranean sun, waving the flags of their cause and cheerily chanting “independence!”

But over the course of this week, that friendly face was replaced by the snarling visage of a furious young man hurling gasoline bombs and chunks of pavement at police struggling to contain riots that have turned downtown Barcelona and other towns in the wealthy northeastern region into no-go zones at night.

A failed 2017 attempt to declare independence left the separatist movement rudderless: Twelve of its leaders were arrested in the wake of the illegal referendum held by Catalonia’s government, and the rest of the top echelon, including former Catalan regional president Carles Puigdemont, fled Spain. Frustration over the fact that the breakaway attempt received no international support has been building since then.

So the fuse was lit when Spain’s the Supreme Court on Monday found 12 of the movement’s leaders guilty for their role in the referendum. Nine were given nine to 13 years for sedition. With no major leader left on the ground to contain it, the rage exploded — aided by technology that has helped much more loosely organized groups to plan protests and hide their movements from police.

For four successive nights, protests have spiraled out of control come nightfall, with demonstrators burning cars and hundreds of trash cans, causing $1.2 million-worth of damage and eventually clashing with police in Barcelona, a leading European tourist destination.

“Catalans tried for a long time to demonstrate to the world that we can achieve significant change through democratic, peaceful means, but we were slapped in the face,” Adri’ Alsina, the former spokesman of the grassroots pro-independence group ANC, told The Associated Press.

“Ever since Monday,” he said, “the people who had the moral authority to stop this, they are in jail.”

Authorities said that nearly 100 people were injured, almost half of them police officers. A total of 97 protesters have been arrested since Monday, including four sent to jail while authorities investigate them for public disorder.

Police said the protesters hurled gasoline bombs, acid, stones, firecrackers, nails and bottles at them. Fireworks hit a police helicopter, although no major damage was caused. Outnumbered regional and national police responded with foam and rubber bullets, batons and shields.

“We have to make a call for calm,” Barcelona Mayor Ada Colau, who does not support a break with Spain, said on Thursday. “These incidents are causing great concern among the populace.”

Peaceful protests like those that long characterized the movement are continuing — including a student strike and marches that are set to converge on Barcelona on Friday.