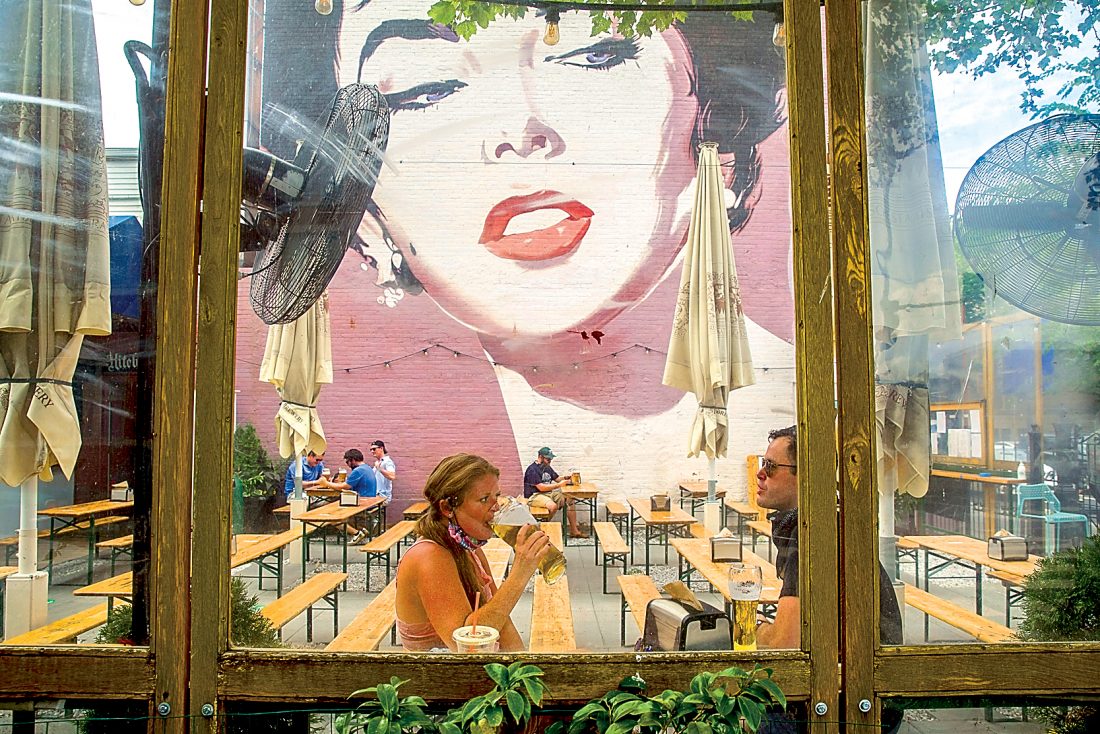 Amber Kirtley (left) and Jeff Gullo drink beers at Dacha Beer Garden in the Shaw neighborhood in Washington on Friday, as the District of Columbia gradually loosens stay-at-home rules that have been in place since March 25 because of the pandemic and allows restaurants to resume outdoor dining. The Associated Press

WASHINGTON — As the nation’s capital took the first tiny steps toward reopening Friday, the continued threat of coronavirus was ever present.

Showing IDs was not enough at the Dacha Beer Garden in Washington’s Shaw neighborhood. Would-be customers had to answer a series of questions about any possible exposure to the COVID-19 and whether they themselves had shown any symptoms.

“Please keep your mask on when you’re not dining and drinking,” hostess Amy Symonds told the patrons, laying out a series of rules and taking down everyone’s’ phone numbers before they were seated at socially-distanced tables.

“It’s good to have some level of normalcy again,” said Jeff Gullo, who was one of the first in line to get in. Fifteen minutes after opening, nearly two dozen people were seated at the popular all outdoor facility.

But the gradual reopening of the District of Columbia as a three-month stay-at-home order was lifted came in fits and starts, with not everyone ready for even a limited return to pre-pandemic normality.

From the outside, the Randolph Cree hair salon in Washington D.C.’s Eastern Market commercial area looked like it was still closed. But inside the door and up the stairs, a visitor found a mini hive of activity , with a cashier behind a plastic shield and three masked hairdressers each tending to a masked client.

“Now that people know we’re actually open, the phone is ringing constantly,” said Michael, a salon employee who declined to give his last name. “Everybody’s in a really great mood so far. A good haircut can really affect how you feel about yourself.”

A few doors down, Christine Arnold wasn’t sure that the partial reopening would really help that much. Her Paris Bleu boutique for imported French accessories had survived the lockdown with some slack from the landlords and a handful of Mother’s Day purchases from loyal clients.

“I’m just hoping to stay in business,” she said. “A lot of places simply aren’t coming back. It really depends on how understanding the landlords have been.”

Washington remains an area of concern in the pandemic. There were 263.2 new cases per 100,000 people in the District of Columbia over the past two weeks, which ranks first in the country for new cases per capita.

All told, more than 8.500 people in the District have tested positive for the coronavirus, and 460 District residents have died.

All across the capital — and the four neighboring Virginia counties that are reopening on the same schedule — business owners and their customers are still considering their next steps.

Earlier Friday, only one of the dozen outdoor tables at the Busboys and Poets branch in Washington’s Brookland neighborhood was occupied, while eight different groups waited for their takeout.

Andy Shallal, who owns seven branches of the restaurant chain, had been ready to reopen for weeks. But some other business owners were more cautious.

“I’ll be honest. I don’t know why (barbers) are in phase one,” said Ryan Mitchell, part owner of the St. Martin’s hair salon in Washington’s Mount Pleasant neighborhood. “Everyone wants to think this is over. I don’t see any reason to think that.”

In Northern Virginia, meanwhile, restaurants are busy setting up tents in parking lots and considering other options, like converting parking lanes to sidewalks and sidewalks to outdoor seating.

“It really will be a block-by-block decision,” said Mary-Claire Burick, president of the Rosslyn Business Improvement District.

She said there’s a mix of excitement and trepidation as the area reopens.

Others are in absolutely no hurry to rush back into an uncertain landscape.

James Waterhouse runs Garden District, an outdoor beer garden in the heart of a lively stretch of bars and clubs. Theoretically, he’s perfectly positioned to thrive in this outdoor phase. But he didn’t open Friday and won’t predict when he’ll be ready.

“I’m not comfortable with all the logistics of how it’s going to work,” he said. “I’m going to be asking a lot of my staff and I need to know I can protect them.”

Still, Waterhouse knows most of his regular clientele is eager to return, but some staff members have talked about staying away over safety concerns. He also seems bummed out about how the necessary safety modifications will change the overall vibe of his place.

“You won’t be able to just sit at a picnic table with a group of strangers,” he said. “We’ll have to serve beer in plastic cups. It’s going to be an environmental disaster.”

As cases spike, states back off opening

PHOENIX — California closed bars, theaters and indoor restaurant dining all over again across most of the state ...

WASHINGTON — The Trump administration was slow to comprehend the scale of COVID-19’s impact on nursing homes ...

The state Department of Labor & Industry has distributed $10 billion in federal funds to Pennsylvanians ...

HARRISBURG — Federal emergency aid for renters in Pennsylvania hit hard financially during the pandemic is still ...