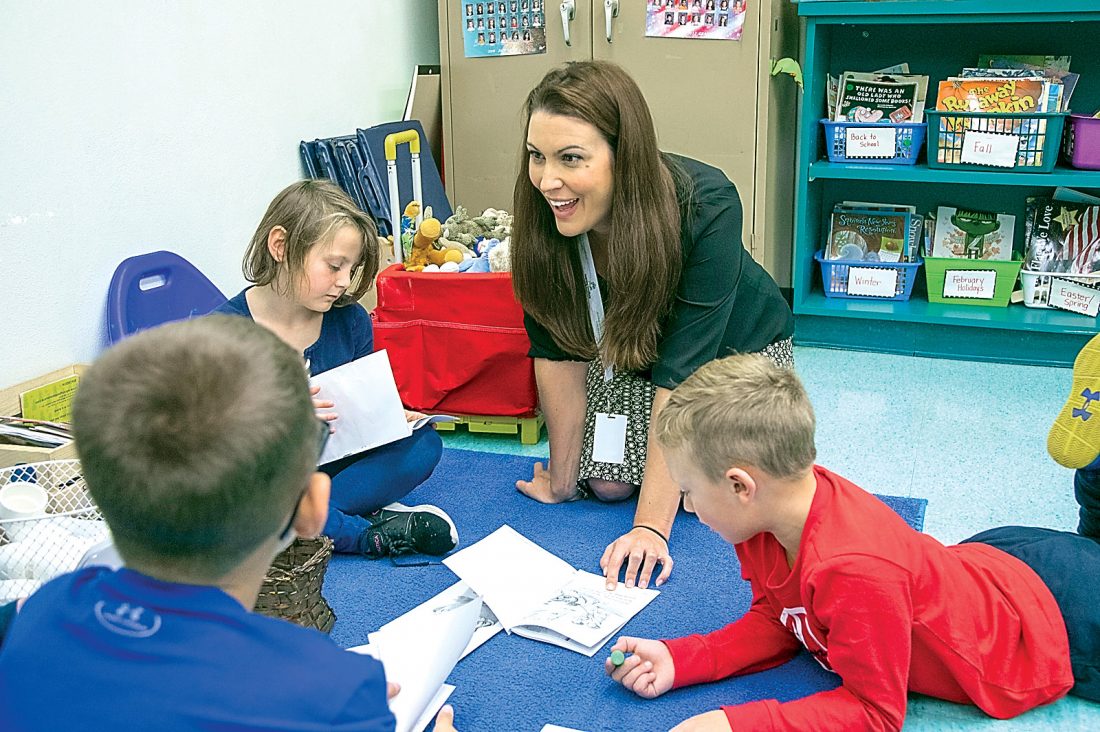 Sara Ruffner, a Literacy Outcomes Specialist for Learning Ovations, helps students with a reading activity in a first grade classroom on Nov. 24 at David Leech Elementary in Leechburg. Pittsburgh Post-Gazette via AP

LEECHBURG — David M. Keibler wanted his dissertation to mean something more than a fancy title and degree.

The Alle-Kiski Valley community he served had crashed from stable jobs to few jobs — from widely comfortable to suddenly not.

A grim uptick in poverty had created new hardships that parents, students and teachers alike were ill-equipped to handle.

As the David Leech Elementary principal saw it, his veteran staff lacked resources to contend with poverty in a region that had long thrived. He wanted them to understand the complexities of the changes they saw among students and their families.

“It would just be the constant beat-down of those kids like, ‘Why don’t you have your homework done,'” Keibler said of his staff’s frustrations. “Or ‘What’s going on?’ Or ‘You don’t care.’ ‘The parents don’t care’ or ‘They don’t come to meetings. They don’t return calls.’ 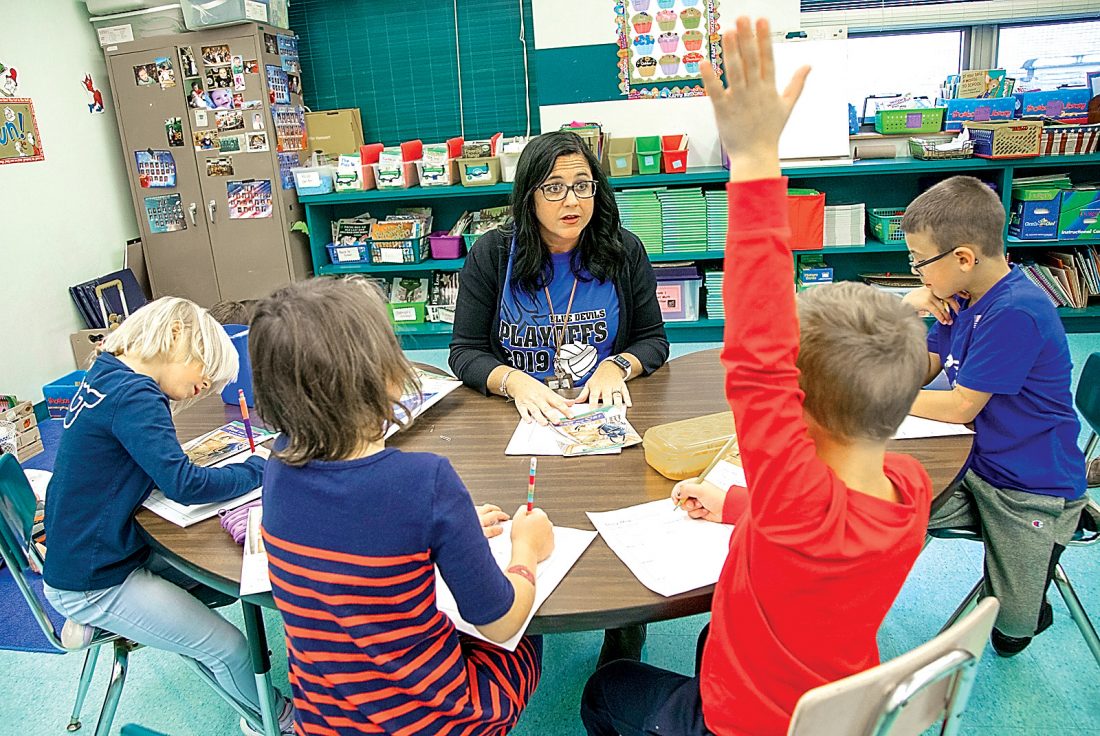 First-grade teacher Niva Vargo works with her students on a reading activity at David Leech Elementary in Leechburg. Pittsburgh Post-Gazette via AP

“So once they understand (poverty), now we can take a different approach.”

For his dissertation — the last leg of a heavy doctoral lift that demanded late nights and time away from his wife and three daughters –Keibler chose to examine the area in which he believed the school could do the most good: child poverty, and how his teachers perceive it.

Armed with his 78-page report, he set out to equip them with the tools to give as many students as possible a chance in a messy, changing, often unforgiving world.

“You could look at the curriculum, you could look at assessments, all of those things,” he said. “But really the driving force in our community was that change, and the teachers didn’t understand what was happening and how we overcome that.”

Each year leading up to the holidays, guidance counselor Danielle Matus helps organize a canned-food drive to replenish a local food bank.

But in this act of charity, she sees the nuance in the challenges they face.

Of the 2,000 or so canned goods that the school collects, many are from the very students the drive is intended to support.

“I’m thinking, ‘I can’t even take this from you because this might be your dinner tonight,'” Matus said.

Generosity is baked into the Leechburg-area’s DNA, she said, from before the bottom dropped out.

The borough and its neighbors have struggled since ATI Allegheny Ludlum closed its West Leechburg facility over a decade ago. The company idled its nearby Bagdad plant in 2016.

Today, the void is reshaping the identity of the tight-knit rural Armstrong County community, tucked along the Kiskiminetas River, about 35 miles from downtown Pittsburgh.

Naturally, the troubles hurt Leechburg’s children, more than half of whom now live below the poverty level — one of the highest rates in southwestern Pennsylvania. (Leechburg Area School District also serves West Leechburg and Gilpin.)

In Leechburg Area’s only elementary school, David Leech, over three in four students qualify for free or reduced lunch — nearly double the rate in 2010.

In his dissertation, Keibler explored how specialized training could help teachers better adapt their teaching approaches to students from disadvantaged communities. He found that his district offered no poverty-related training for teachers before last year.

He also created a snapshot of how his staff perceived the students they taught. Surveys completed by 34 teachers throughout the district — most with at least a dozen years of experience — showed further evidence that students were struggling.

Respondents reported seeing a rise in problems among students in recent years, including stress and anxiety, poor concentration, misbehavior, absenteeism and an apparent lack of educational support at home. The data validated what many of them were already seeing firsthand.

As part of the research, teachers enrolled in training by a private boarding school for poor kids. A pillar of the training held that students, in order to be successful, must be competent in at least six of the following eight benchmarks: financial; emotional; mental; physical; spiritual; support systems; role models; and knowledge of “hidden rules.”

The question was, to what extent could Keibler and his colleagues help students check those boxes while the economic landscape shifts beneath them?

On a russet Thursday morning in late October, Niva Vargo was schooling her first-graders in no fewer than five of the categories at once.

Stationed at a table of eager young readers, she walked them through an exercise plotting story maps of picture books, including titles such as “A Job For JoJo.”

“Is it fantasy or reality?” she asked them. “Fantasy is when it’s make believe.”

“Realistic fiction,” one student countered, “because it could happen.”

In the beaming classroom at the end of the hallway, coats and backpacks were slung beneath a poster of “Oh, the Places You’ll Go!,” the Dr. Seuss classic that explores life’s ups and downs.

A native Leechburger, Vargo went into teaching because she remembered having positive experiences in the district and wanted to ensure future generations did, too. But 15 years into her teaching career, it’s in many ways a different community than the one in which she grew up.

“I think we’re seeing poverty a lot more now than we did before,” she said. “And I don’t know if it’s because of the lack of jobs in the area, or what the actual reasoning is for it.

“But we are seeing it a lot more, which is causing there to be a big gap between some of our students. So it’s important for us to try to eliminate that gap.”

The district recently implemented full-day kindergarten, which gives first-grade teachers a better grasp on their students’ skills. Some may be reading at grade level or beyond, while others may have never been read to before, let alone know how to read themselves, she said.

Vargo looks for signs that students might lack help at home. Indicators include unchecked folders or backpacks stuffed with papers that parents have likely never seen.

“I know it’s not going to get done at home, so I’ve got to do it here with them,” she said. “I’m not going to punish them for something that’s not their fault.”

As 6- and 7-year-olds, her most disadvantaged students are likely not yet fully aware of their circumstances. “But the older they get, the more noticeable it becomes,” she said.

Sometimes that undertaking means feeding the hungry, furnishing winter coats on a cold morning, helping with personal hygiene, or just “giving the love they might not be getting somewhere else,” she said.

There’s a stereotype about poverty that particularly vexes Keibler because he sees his school defy it. It’s the notion that parents don’t care about their kids.

“A lot of them are single parents working two or three jobs because they can’t make ends meet to survive,” he said.

“So they’re not home at nights. Someone else is taking care of the kids.”

He hopes the school can make a difference by building trust with families and students, and filling gaps where they can.

“We can’t control the wealth of a family,” he said. “But we can control giving them a caring environment.”

GREENSBURG — A defense attorney says he expects to appeal the murder conviction of a western Pennsylvania man who ...

NORRISTOWN — A Philadelphia man accused of having stabbed and run over his ex-girlfriend in the parking lot of ...

HARRISBURG — For the first time in three decades, Republicans in Pennsylvania are facing the redrawing of ...

The spotted lanternfly, an invasive pest from Asia that is wreaking havoc on valuable trees and vines, is costing ...

A former financial planner who was kicked out of the securities industry and ordered to pay millions of dollars in ...

PITTSBURGH — A former librarian and a bookseller have pleaded guilty in the theft of rare books from the Carnegie ...