‘A work of love’:Family caregivers share their joys, struggles 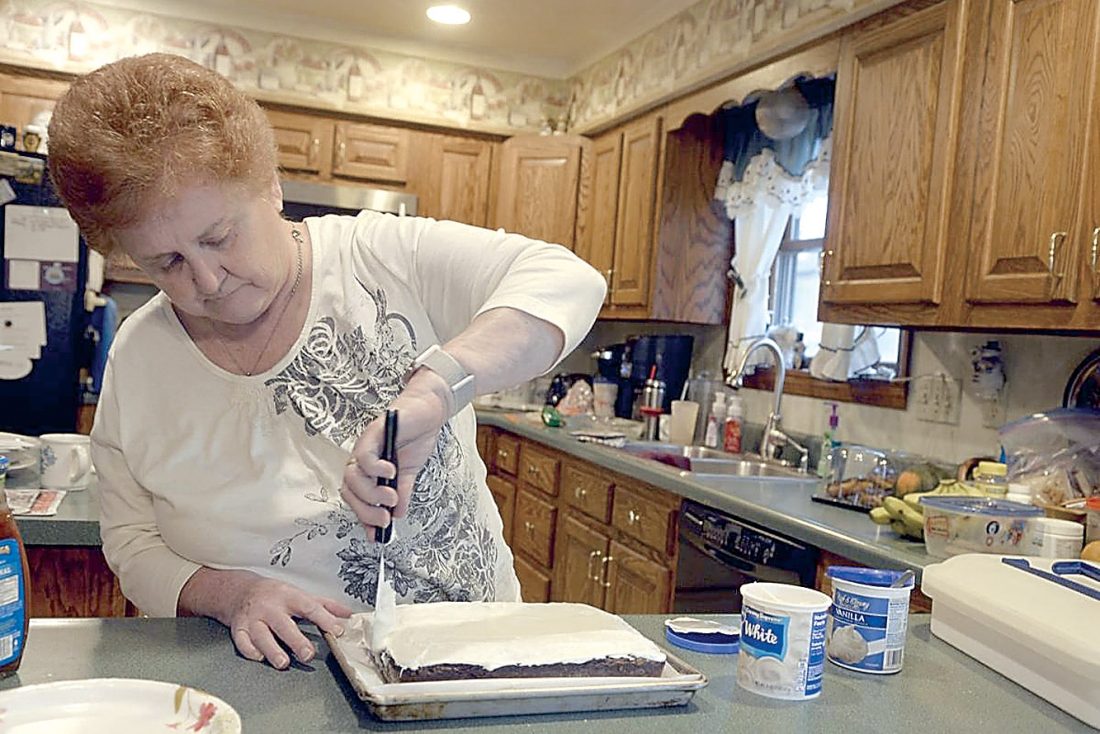 Connie McKnight ices a cake for her grandson’s 10th birthday. She cared for her grandson when he was born prematurely and now takes care of her 94-year-old mother-in-law. Family Caregiver Alliance’s National Center on Caregiving estimated one in four of the nation’s 43.5 million caregivers spend 41 hours a week or more providing care. Herald-Standard photo

UNIONTOWN — Cathy Johnson moved home from Philadelphia in 2013 to help care for her father, former California University of Pennsylvania professor Dr. David L. Johnson, when he was diagnosed with dementia.

She often spoke to her mother, Connie Johnson, on the phone, but recalled a change in her tone during a phone call in 2012.

“I could hear a difference in her voice in that particular conversation. She said, ‘You don’t have to come right away, but it’s getting to be time.'”

Johnson and her mother are among millions of people across the U.S. who provided care for a family member or loved one. 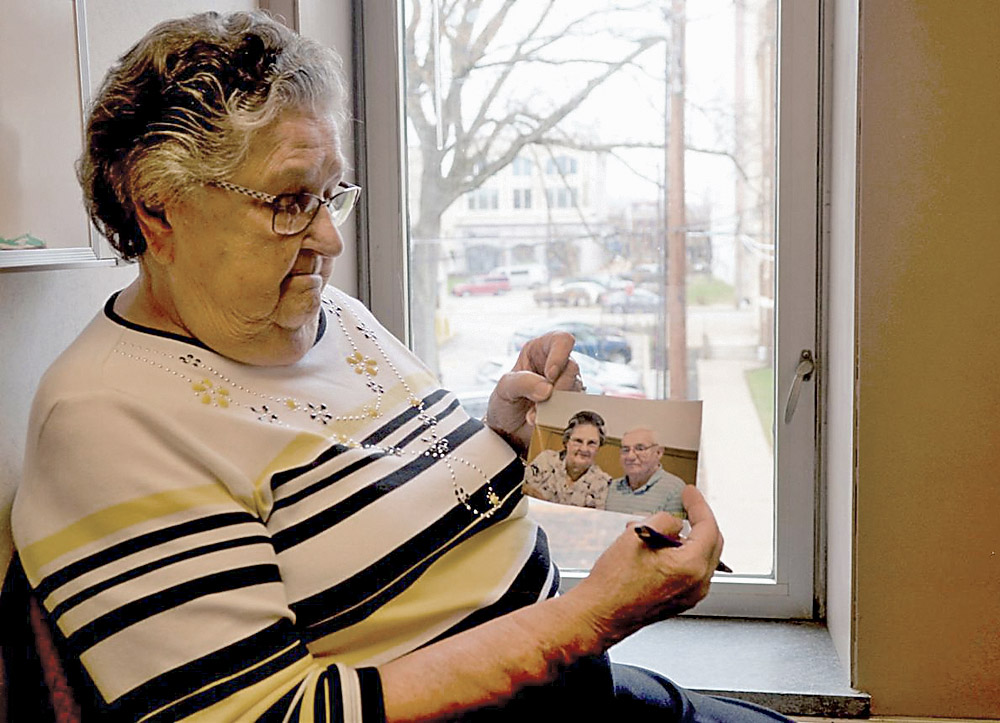 Emma Jane Davis holds a photo of herself and her husband, Arnold Davis, who died in April. She worked as a nurse at Brownsville Hospital and cared for her husband until the end. Herald-Standard photo

43.5 million caregivers across the U.S. have provided unpaid care to an adult or child in need in the last year.

The alliance estimates family caregivers spend an average of 24.4 hours weekly providing care, and one in four spend

Most of that care is offered to those who are older, according to the FCA and Centers for Disease Control and Prevention. While Census data shows that 16% of people in the U.S. are 65 or older, locally those numbers are higher with 21.2% of Fayette County’s population 65 or older, 20.6% in Washington County; 18.9% in Greene County and 22.7% in Westmoreland County.

Cathy’s father, a former chemistry professor, was in his 70s when she moved into his home in California, Washington County.

As she cared for him until his death in April at age 80, she watched him struggle with his failing memory and with relinquishing control.

“Intelligence meant a lot to him,” said his wife. “He felt he was slipping.”

Her initial attempts to care for him caused a rift in their relationship. Connie said she thinks her husband did not want to admit he needed help.

“I think he was scared, but he didn’t want to show it,” she said.

On Father’s Day, Cathy asked her mom what she could do to rebuild the relationship. David Johnson loved food, and Connie knew the way to her husband’s heart. Cathy brought him an ice cream cake.

“And the rest is history,” Cathy said.

Over the years, the women watched his mental decline. At some point, they said, David knew they were friendly and safe and brought him food, but no longer recognized Connie and Cathy as his wife and daughter.

The former professor loved to visit old stomping grounds at Cal U. Connie put posters up at the university with his photo so staff would know to call her if he got lost. As he lost his ability to speak, he kept address cards in his pocket. In July 2018, he walked to campus, but the posters with his photo on them were lost after an office renovation. Connie received a call that he was taken to the hospital. She found him restrained on a hospital bed.

“He just had this look on his face, like, ‘Why am I tied down?'” she recalled tearfully.

At the encouragement of doctors, Cathy made the painful decision to place her father in a memory care home. She found one with walking trails so he could still go for walks and not get lost.

Now, Cathy is living with her mother. While she does not require much care, she helps with the cleaning and cooking, often using the carved utensils and bowls her father made her mother.

“I’m here for the long haul,” Cathy said. “Whatever she needs, I’ll do my best to fulfill that.”

Kayla Snyder, supervisor at the Southwestern Pennsylvania Area Agency on Aging, said caregivers tend to forget to take care of themselves. The agency hosts support groups to teach stress reduction and luncheons to thank the caregivers twice a year.

The CDC reported in 2018 that caregiving can include health risks, finding that those who provide care are at increased risk for depression and anxiety, compromised immune systems and self-report worse physical health due to the stress of caring for another.

“It’s a work of love,” Snyder said. “Most caregivers are family members, but some are lifelong friends.”

Many caregivers have taken care of more than one person, and provided care for more than one diagnosis. Support groups can also provide opportunities for caregivers to learn from those who have been in similar situations, and share tips for resources.

The agency provides services such as in-home support, which could provide caregivers with an opportunity to leave the house for a time and know their loved one is still being cared for. An ombudsman program investigates any complaints a person may have with long-term care.

“There is help out there,” Snyder said.

Corrine McKnight of Dawson attends caregiver support group meetings with her friend, Emma Jean Davis, whose husband died in April. McKnight left her job in the medical field to care for multiple members of her family, from one of its youngest members to the oldest, and offers support to her friend.

As McKnight raised her four children, she began caring for her husband’s grandmother. She returned to work when her children were grown and after she retired, she often cared for her grandson, who was born prematurely. He required oxygen for three months, in addition to therapy and many appointments in Pittsburgh. She now cares for her husband’s 94-year-old mother.

“I enjoy taking care of other people. It’s just rewarding,” she said.

Recently, she was preparing for her grandson’s 10th birthday, baking a cake and making tacos. He has mild cerebral palsy, but is thriving. He has joined a Boy Scouts troop and plays trombone.

Caring for her grandson was a contrast to caring for aging family members.

McKnight said her mother-in-law values her independence and is determined to stay in her own home as long as possible. She reads birth dates and addresses of friends and family to keep her mind strong.

“She’s very aware. She pays her bills. She knows what’s going on,” she said.

McKnight also helped Davis care for her husband, Arnold Davis, as his health declined. He died at age 86 April 20.

Davis remembers May 14, 2017, as the day her husband’s health began a rapid decline. They were celebrating her birthday and Mother’s Day when he was rushed to the hospital.

Emma Davis was a licensed practical nurse who worked at the former Brownsville Hospital for decades. She used her nursing abilities to care for her husband until the end. She had help from the Area Agency on Aging and OSPTA Home Care & Hospice.

A nurse reminded Emma to let others help her, saying she could hurt herself and wouldn’t be able to care for her husband.

McKnight stayed with Arnold Davis while his wife played piano at church. The women were friends and both members of Brownfield Seniors. When Arnold was still healthy, the couples would travel together.

They would have celebrated their 67th anniversary Nov. 21.