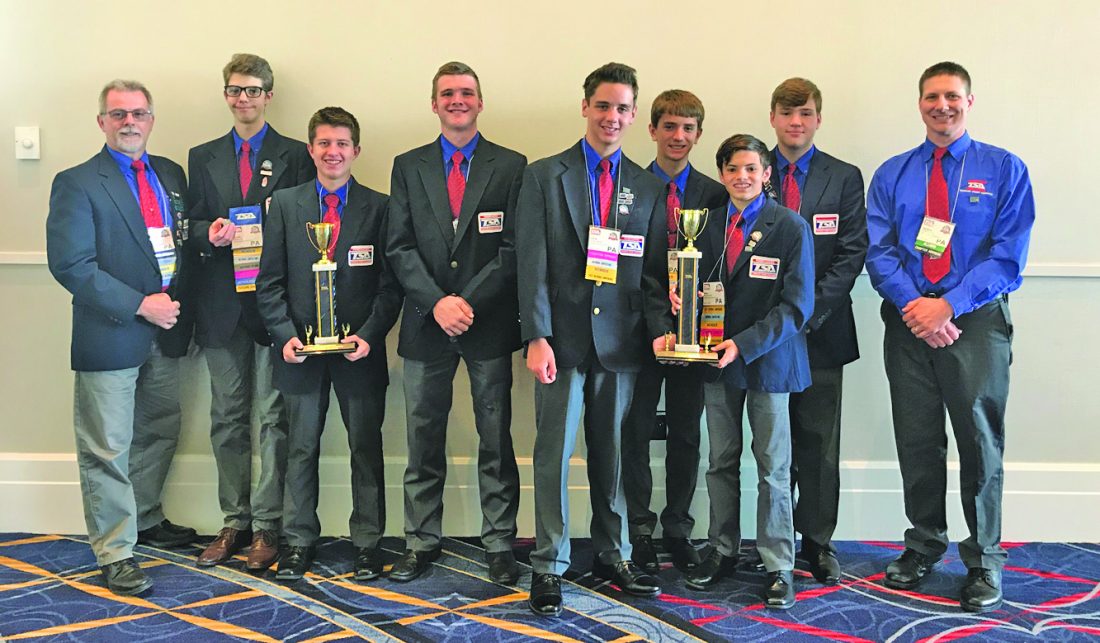 This was one of the largest conferences to date, with more than 8,500 student competitors from almost every state across the country as well as Germany and Turkey.

TSA has more than a quarter of a million members.

Students in high school and middle school compete in 70 competitive events from building a balsa wood structure, to programming robots, to giving presentations, writing children’s stories and debate, to name a few.

The Northern Cambria Middle School students — Mikey Konitsky, Chris Yahner, Peyton Myers and Braden Moriconi — who were the state champions in the mechanical engineering competition, competed and become the national champions in this event. 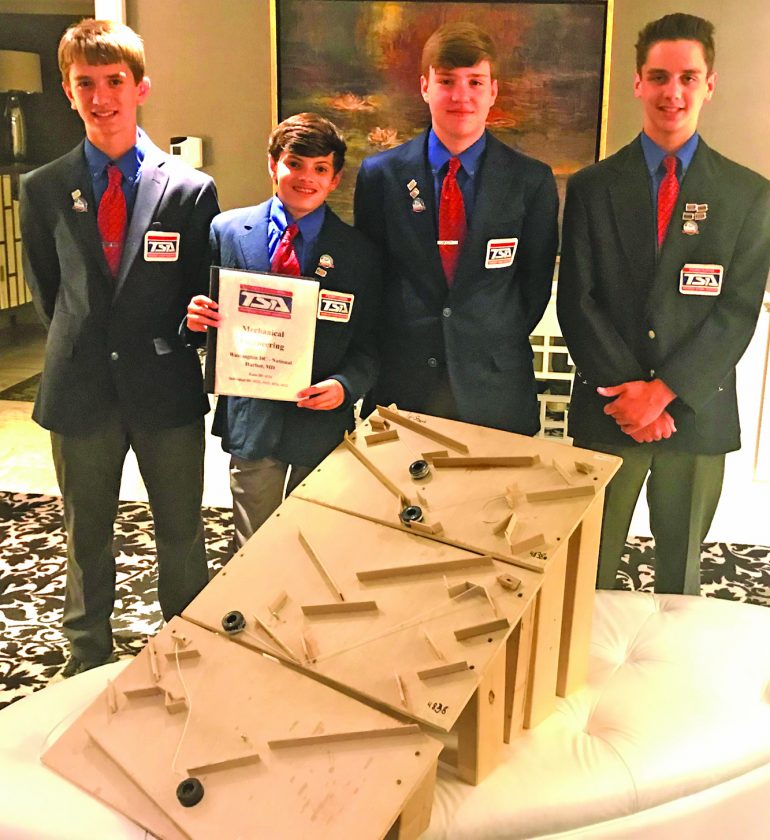 For this competition, students had to design and build a Rube Goldberg Machine, which is a device that includes all six simple machines — lever, wheel and axle, inclined plane, screw, pulley and wedge — on each of the three subsystems.

Then at the end, it had to do something creative; theirs popped a balloon.

The students also had to create a portfolio explaining and demonstrating their research and ideas, including CAD drawings and a bill of materials.

Once they arrived at nationals, their portfolio was judged and the top 12 semi-finalists were announced.

The team then needed to do a presentation and interview in front of a panel of judges. 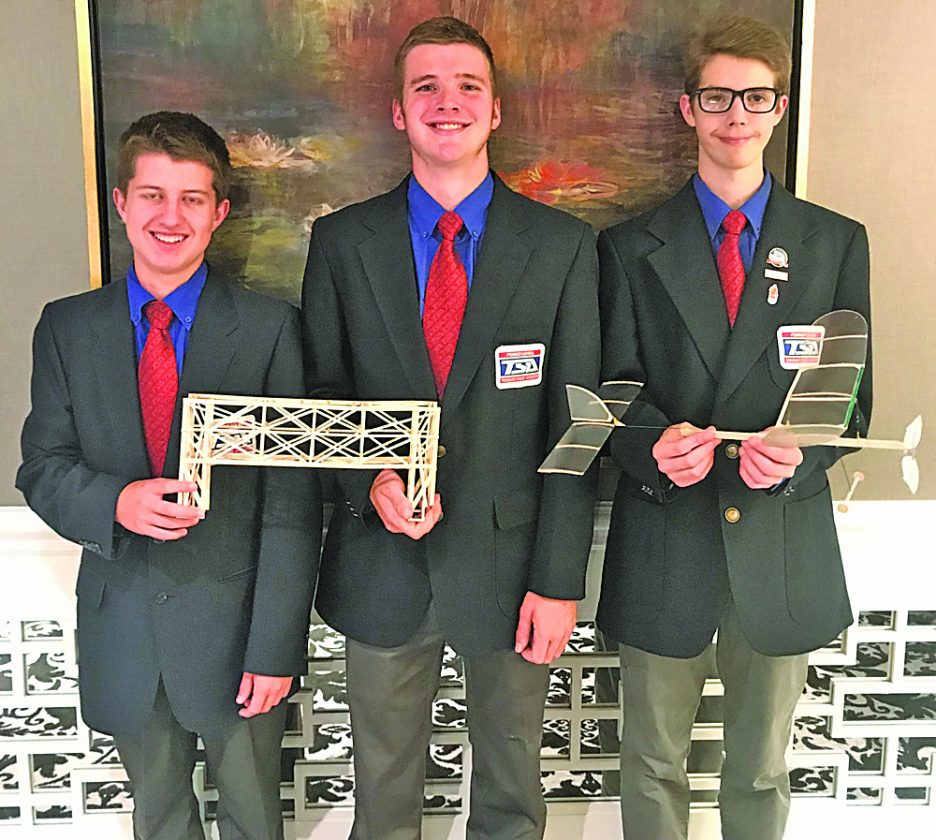 Caleb Born and John Yahner, who were national champions last year at the middle school level, were national qualifiers from the state competition, competed in an event titled Structural Design & Engineering.

In this event, it was required to build a structure made from balsa wood to strict specifications.

This year’s challenge was to build a train trestle bridge.

The structures are first weighed and then destructively tested by adding weight to it until it breaks. Then the efficiency is calculated to determine the winners.

The boys created a prebuilt structure and presented to the judges for destructive testing. They competed against 86 structures from around the nation. 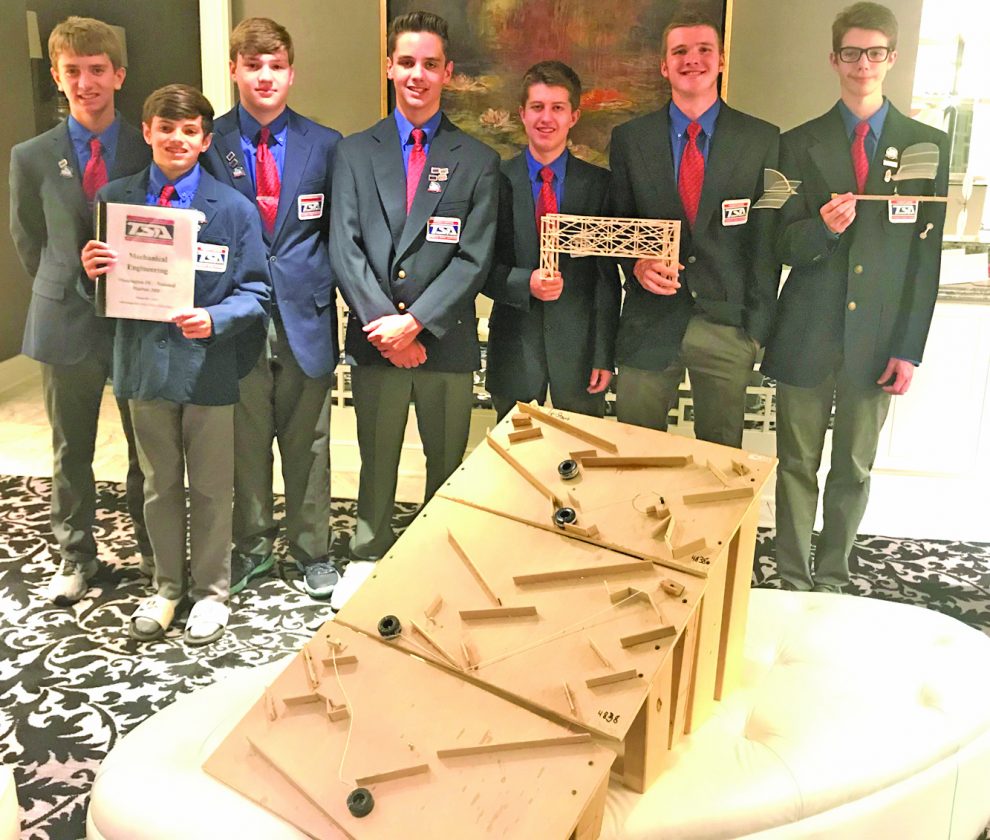 John and Caleb’s pre-built structure held 217 pounds which resulted in an efficiency of 4.8. This was enough to make the top 20 semi-finals.

They then came back to build a new structure on site with different specifications and a time limit of 2.5 hours.

Their second structure was again destructively tested and held 147 pounds, which resulted in an efficiency rating of 3.8. They placed third in the nation being the second straight year placing in the top 10 in the nation.

Garrett, who was the state champion in flight endurance, placed ninth in the nation at the TSA conference.

The flight endurance event required a plane built to strict specifications and powered by a rubber band.

A portfolio accompanies the plane that includes technical attributes of the design, test flight log, an explanation of the flight log, a graphical flow chart of the building process and technical drawings of the aircraft.

Garrett’s plane was built from balsa wood and carbon fiber to reduce weight while maintaining strength.

The craft was required to take off from the ground, typically fly in a circular flight path for the longest time aloft and land. Garrett had two consistent flights of 2 minutes and 2 minutes, 3 seconds, reaching an altitude of 28 feet. He then became a top 12 semi-finalist and had the opportunity to interview. Garrett competed against 88 planes enroute to a national place.

Northern Cambria had another successful year in TSA and advisers Ed Link and Matt Kline are proud of their chapter’s accomplishments. All students that made the trip achieved national status as a top 10 finalist.

“The Technology Education & Engineering Program at Northern Cambria is strong and results like this proves that fact,” the advisers said, adding “The impact of TSA on our students has carried many to professional careers such as structural, civil, electro-mechanical, mechanical, engineers, architects, designers, robotic and CNC Programmers.”

The advisers would also like to thank the NC school board and local and corporate businesses for their continued support.

Other results from the national conference.