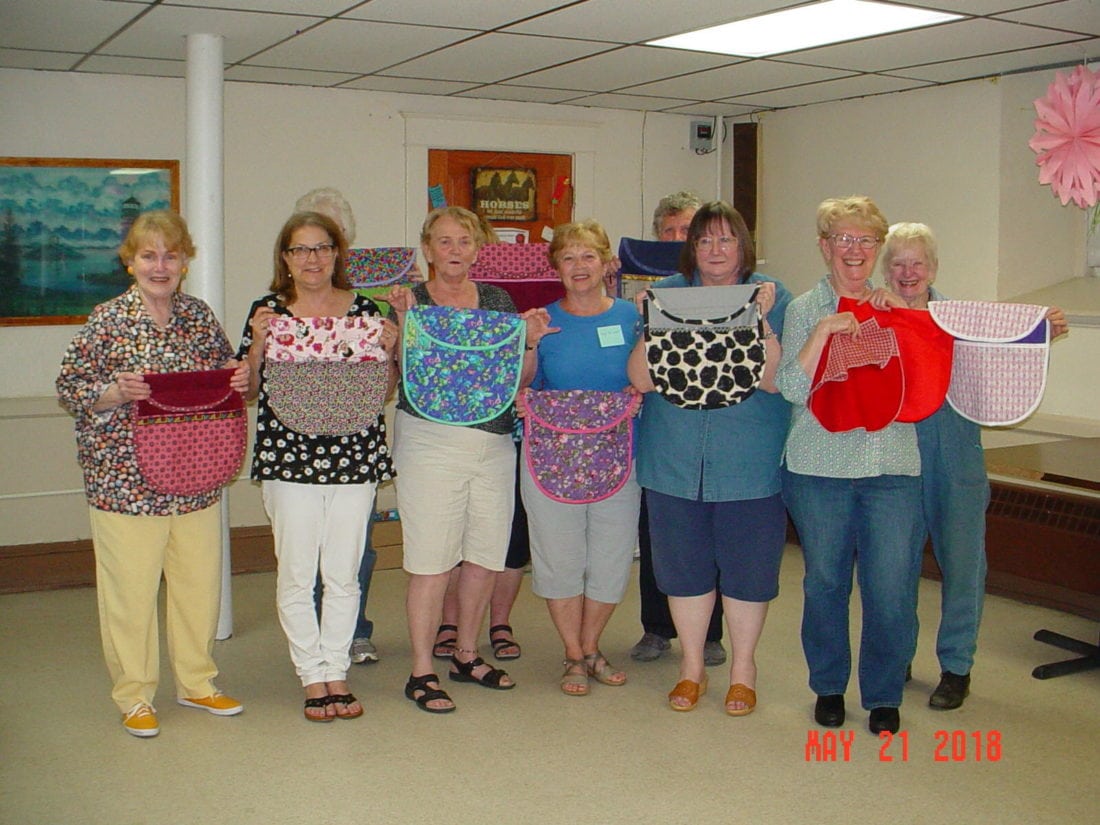 The Altoona Area Sewing Club completed a service project by making walker bags for St. Leonard’s Home in Hollidaysburg. Shown are (from left): Joan Moore, Rose Markley, Claire Barney, Patty Meintel, Janice Lonsinger, Bonnie Gibboney and second row is Judy Diebolt and Rusty Baumgartel. The club is open to anyone interested in sewing, and it meets the third Monday of each month except in December and January at Trinity Lutheran Church, Juniata. For more information, email ygibboney@yahoo.com.

The Adam Holliday Chapter National Society Daughters of the American Revolution met May 5 at the Park Hills Country Club.

Margaret Skrivseth, a Bedford Chapter DAR member, presented the history of Highland Hall from 1865 to the present.

Her talk included numerous photos of the building and its occupants. Skrivseth is originally from Tallahassee, Fla. She volunteers at the Blair County Genealogical Society, is a member of several lineage organizations and is the owner of MRS Genealogical Services Inc., a genealogical and historical research company based in Altoona.

The Pennsylvania State DAR luncheon is scheduled for June 21 at NSDAR’s Continental Congress in Washington, D.C.

Conservation Chair H. Jean Sinal talked about Urban Agriculture and provided packets of cherry tomato seeds for all in attendance.

Any woman who can prove lineal descent from a patriot who served in the Revolutionary War or to an ancestor who gave aid to American colonists during the American Revolution is eligible for membership in the DAR. For more information, visit http://pssdar.org/chapter_sites

The Altoona Hospital School of Nursing Alumni Association will hold a planning meeting at 6:30 p.m. June 12 in the puzzle room at Graystone Villas, 1101 Flamingo Drive, Altoona.

The group will make plans for its picnic at 1 p.m. Sept. 16 at Legion Park, Hollidaysburg.

The special feature will be “Storytelling” by Esther Wharton; music will be presented by Diane Luke; and the speaker will be Cathy Schrader of West Virginia.

BEDFORD — The quarterly meeting of the frontier Patriots Chapter of the Sons of the American Revolution will be held at noon Saturday at Ed’s Steak House, 4476 Business Route 220 (just off Exit 1 of I-99).

Some purposes and goals of the Sons of the American Revolution are patriotic, historical and educational, including carrying out the purposes of the Preamble of the Constitution; following the injunctions of George Washington’s farewell address to the American people; and perpetuating the memory and honor of Revolutionary War Patriots

The regular monthly meeting of AFSCME Retirees Sub-chapter 8306, Duncansville, will be held at 1:30 p.m. Wednesday at the union hall on Patchway Road.