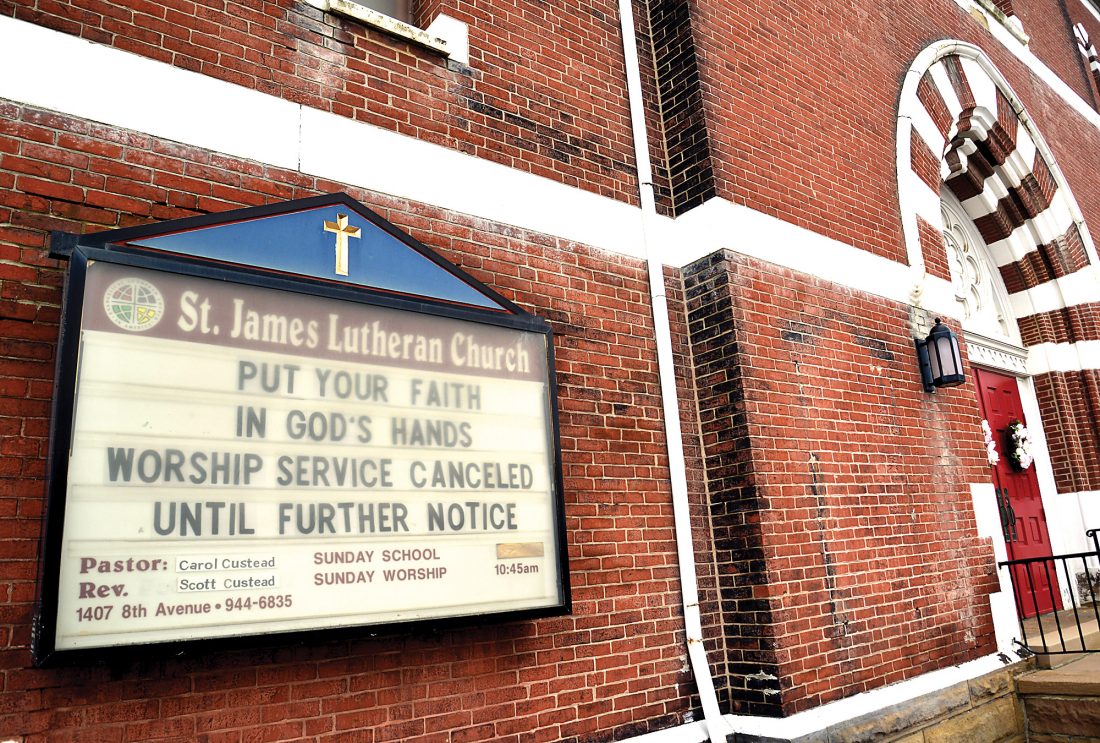 Although most people willingly are abiding by the self-quarantine and social distancing guidelines to prevent the spread of the coronavirus, it has also brought about unsettling reactions.

People are told not to panic, yet some are emptying grocery store shelves of staples, stocking their liqueur cabinets and arming themselves.

Pastor Matthew Hornberger of Fourth Street Church of God said fear is driving the hoarding of food and sales of guns and liquor.

“Uncertainty about what is to come causes fear,” he said.

He said people turn to whiskey to kill the pain of their fears and to guns to protect themselves from what might happen.

“Fear responses come from where faith used to be,” Hornberger said.

In these uncertain times, those with faith need to step into the gap and calm the waters, he said.

He said Christians in the area are doing that in one way by feeding students and those in need.

Christians themselves are adapting to changes. Spiritual leaders are making adjustments in worship to abide by President Donald Trump’s recommendation that no more than 10 people gather in one place, down from the previous limit of 250 people.

“For many folks, it is an unprecedented time,” said Pastor John Godissart of First United Methodist Church in Hollidaysburg. “They are wondering ‘how bad will it be? How long will it last?'”

He and other spiritual leaders offered some suggestions for getting through this time of uneasiness.

“The best thing is to be in prayer, for people to connect with God,” Godissart said. First United Methodist Church is pre-recording the pastor’s sermons and making them available on Facebook and YouTube as well as mailing DVDs and printed copies to those who request them.

He said the church has seen an increase in people’s need for food and gift cards. Others have expressed concerns about how the shelter in place order has affected their employment at small businesses and the lack of paychecks.

Bishop Mark L. Bartchak of the Diocese of Altoona-Johnstown also recommends prayer and spiritual reading during this time of social distancing as well as praying for one another.

He, too, said it is a time to reach out to others.

“Let’s not forget those who may be alone,” Bartchak said in an email. “Call someone who may not have visitors at this time. A phone call can do a lot for them and for you. It’s especially helpful to ask others how they are doing. We are all in this together, and this can be an opportunity to draw closer as neighbors and families.”

Other ways he suggested to remain calm and productive are to read a book, listen to music, make a baked good from scratch or clean out closets.

He also said to involve others in the family in an activity.

“I remember as a child being snowed in for days during a blizzard and learning how to play board games and card games with family members,” he said.

Both Bartchak and Hornberger advised to not get caught up in watching the news all day.

“I have heard experts say that it’s not healthy if you allow yourself to be bombarded by the news of the corona­virus pandemic for hours a day,” Bartchak said.

Hornberger recommended limiting news watching to an hour a day.

He suggested visiting a family member or friend if you both have no symptoms.

Limiting social contact can be trying, especially because Masses and services are only available on television and the internet for now.

Bartchak knows what it is like to watch Mass on television. He said he has done so a couple of times in his life due to illness. Despite not being physically in the parish, he said he found himself saying the responses and prayers out loud.

“It made me realize that I was part of the most important liturgical prayer of the Church even though I was not physically there,” he said.

Bartchak said he will continue to celebrate the TV Mass and pray for everyone and their needs.

Hornberger said Fourth Street Church of God’s message will be on YouTube at 9:30 a.m. Sunday. Ironically, his topic is “Fear.”

For Godissart, it may have been divine providence that he preached a series on “Facing Your Fears” before the Lenten season began

“Hopefully, seeds were planted in individuals who heard the messages,” he said.

In his own life, Godissart said he continually focuses on Proverbs 3:5 and 6.

It reads: “Trust in the Lord with all your heart, And lean not on your own understanding: In all your ways acknowledge him, and he shall direct your paths.” (NKJV)

He said he encouraged a person worried about income to trust God and to know that he will provide.

He added that his message for this Sunday’s sermon is about King David who was going through horrific circumstances and even feared for his life. He said David and other Psalm writers remind people of the times God came through and to have hope.

“God was faithful to them in the past, he will be faithful again,” Godissart said.