Chairman, Board of Trustees of the Blair County Historical Society 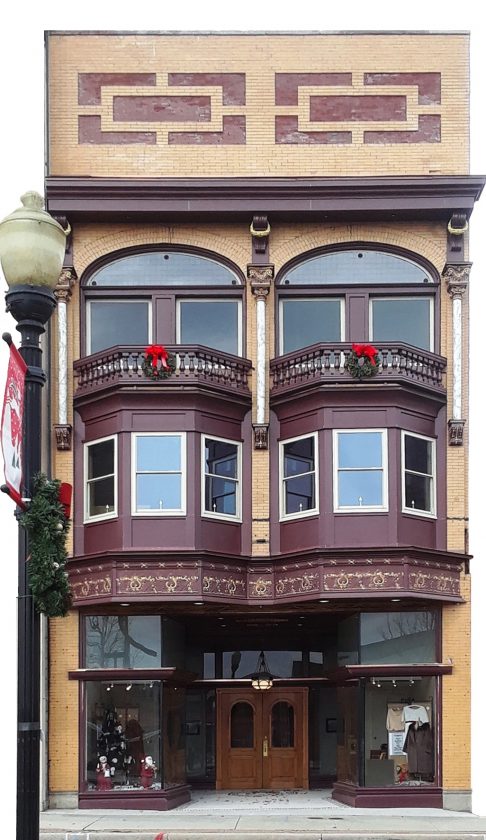 Courtesy photo The Cooper Building, 1316 11th Ave., Altoona, is one of the buildings renovated by John Rita.

n The Lifetime Achieve-ment Award for Historic Preservation will be given to John Rita, professional conservator, for his extensive restorations of buildings in Altoona and Blair County, and throughout the United States, including the Cooper Building, the Blair County Courthouse and Our Lady of Mount Carmel Roman Catholic Church.

Rita also has helped restore and preserve the Mishler Theatre, Santella’s Funeral Home, the Church in the Middle of the Block, Lakemont Park’s Casino murals, an extensive decade-long restoration of the Pennsylvania State Capitol building in Harrisburg, frescos at Old Main at Penn State, University Park, portraits of the Pennsylvania Supreme Court Justices, analytics on the Tomb of the Unknown Soldier and consultant for the Diplomatic Receptions rooms at the U.S. Treasury Building in Washington, D.C.

He is a professional asso-ciate of the American Insti-tute for the Conservation of Historic and Artistic Works. At age 19, he began his studies by visiting the major museums and great churches. Beginning in 1978, he began restoring Our Lady of Mount Carmel Church in Altoona, a project that lasted almost three decades. Over the years, he has created and restored murals of Lutheran and Methodist churches as well as painted Byzantine Icons. Rita’s previous honors include the 1999 Community Service to the Arts award from Southern Alleghenies Museum of Art, 2003 Blair County Arts Hall of Fame, 2006 at the Blair County Arts Festival Ken Kuhn Memorial Award for Artistic Distinction.

n Receiving an award for Historic Preservation of a building are: James Columbo for the restoration of the Cooper building at 1316 11th Ave. and George Batrus for preservation of Tom and Joe’s Diner, 1201 13th Ave. The Cooper building has been restored to its original Italianate 1908 facade and included replacement of missing bay windows, balustrades, pillars and windows as well as the original street doors and display windows, and tile flooring. A mural is slated to be added to the sidewall of the building.

Tom and Joe’s opened in 1936 and the present building was built in 1952. It is a typical 1950s diner architecture and has been restored to its retro-1950s look with red and cream booths, checked floor and the original jukeboxes at each booth.

n Adaptive Reuse of an historical building will be given to Jeff Long of Jeff Long Construction who is honored for the adaptive reuse of an historical building, the Graystone Grande Palazzo, 2500 Seventh Ave. The former Mercy/ Bon Secours Hospital, vacant for seven years, was on the verge of being razed. The complex will include 145 luxury apartments and 68 assisted living units for senior living. Amenities include a swimming pool, fitness center and a series of businesses on the first floor consisting of a coffee shop, dentist, hearing aid center, boutique dress shop, beauty salon and spa, a restaurant and more. The tentative opening is scheduled for this summer with Phase II, an adjacent nursing home complex, in 2022.

n Historical preservation and adaptive reuse will be presented to Lakemont Park. The park has been returned to its original concept of a place of leisure pursuits. In 1895 that might have been a stroll in the park and its gardens, picnics, boating and skating. It later became a full amusement park. Today, the park has been both restored and adaptively reused as a place for baseball, tennis, miniature golf, badminton and reflecting in an adaptive way, its original concept of picnic tables along with the preservation of select amusement rides based on the 1950 era. Andrea Cohen will receive the award on behalf of Lakemont Park and its staff.

n The Blair County Commissioners will be acknowledged with an award for historic preservation of the Blair County Courthouse exterior and courtrooms. The courthouse was built in 1875-76, and dedicated on July 4, 1877. It and an addition built in 1906 suffered severely over its lifetime with water damage and alterations of the 20th century. The building has been stabilized, the main courtrooms and the 1906 lawyers’ lobby have been restored to original grandeur. This award will recognize the role of the Blair County Commissioners, past and present, and the Preservation team.

n The award for the preservation of a cultural tradition will be given to all those Altoona-Italians who have preserved their heritage from the beginning of the city in 1849 into the 21st century, when the Pennsylvania Railroad imported equal numbers of Irish, German and Italian immigrants to work in Altoona. The Irish for their skills in carving out the path of the railroad; the Germans for their skills in building the engines and rail cars, and the Italians for the skill in masonry, especially the building of the graceful, stone-arched bridges.

The heritage legacy includes the preservation of churches, social organizations, restaurants and businesses, festivals and parades. Accepting the award on behalf of all Altoona-Italians will be Rev. Frank Scornaienchi, TOR, of Our Lady of Mount Carmel, chosen as the cultural mother of the Altoona-Italian community. Representatives of groups representing Altoona’s Italian heritage will include the Rev. Brian Saylor of St. Rose of Lima church and representatives of social organizations, restaurants and businesses.

Where: The Casino at Lakemont Park