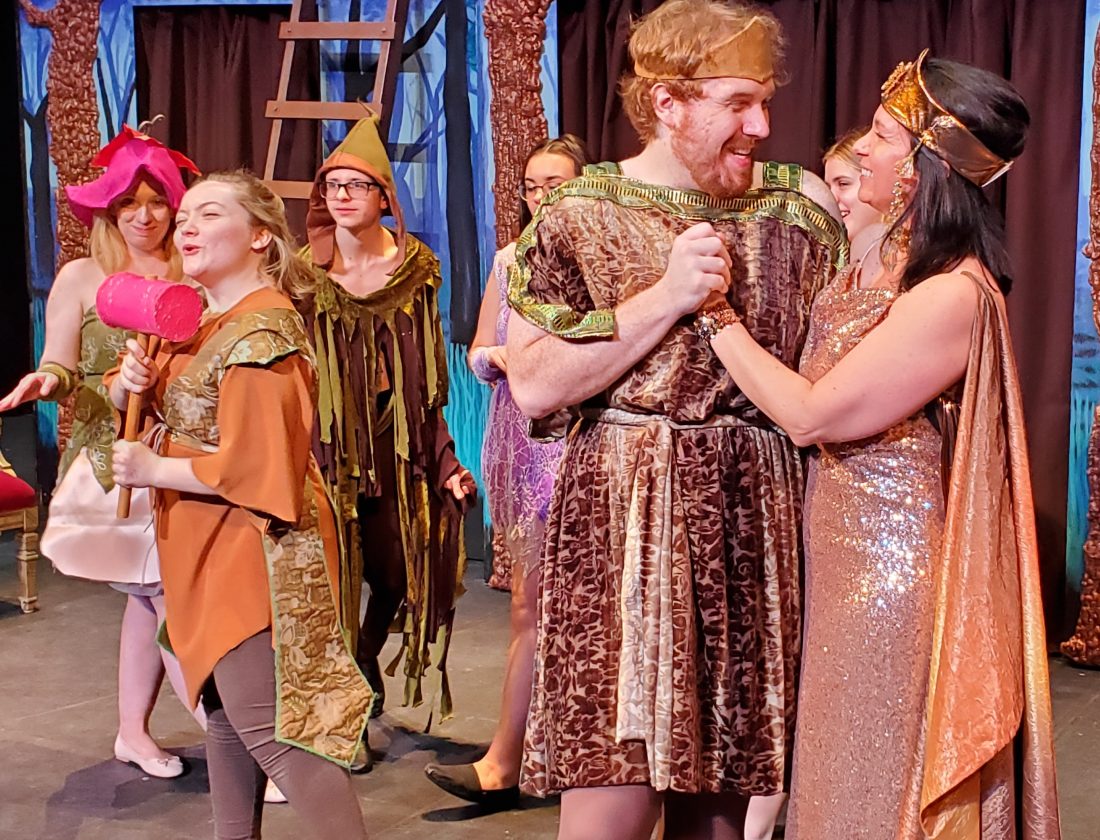 “It’s a great comedy and is a funny and very entertaining show about love and how people who belong together should be together even if they need a little help from the fairies,” said director Tom Liszka. A fun fantasy, Liszka said he has strived to remain true to Shakespeare’s intentions — mimicking its day time presentation, gender-bending roles and audience-actor connections. The addition of 1950s-style Do-Wop style music will also modernize the musical, said producer Michelle Barnes describes as the “original romantic-comedy.”

Liszka’s goal is to present the classic tale as Shakespeare intended. For example, because 17th Century shows were presented during the day, the audience will notice the house lights will be kept up so the actors can see the audience. Another difference is that 12-15 audience members will be seated on stage. Set changes are also kept to a minimum.

These practices “up the ante and invites the audience into the play,” Liszka said.

“One of the mistakes often made with Shakespeare performances is that it is portrayed too realistically. Realism didn’t matter so much back in his day,” he said.

More than 40 candidates auditioned for a role in Midsummer — one of Shakespeare’s most popular works, Liszka said. In summary, the play takes place on the eve of a royal wedding, a quartet of lovers and a motley group of amateur actors enter a fairy-filled forest where under bewitching moonlight enchanting, magical and mischievous happenings take place as the worlds of mortals and fairies cross paths. This results in sorcery, infatuation and mayhem.

Some of this mayhem ensues from discord between the king and queen of Fairies, Oberon (Jordan Shumaker) and his wife Titania, played by Barnes, who said she found Shakespeare’s long and multiple monologues and soliloquys “challenging” because Shakespeare’s English is different than today’s American spoken English so preparation involves understanding the syntax, comprehending the Bard’s intent as well as the usual memorization.

In one long monologue, Titania chastises her kingly husband because of the many fights’ “environmental fall out.”

“There are all these supernatural things happening in the world because they aren’t getting along. She tries to point out how the quarreling is affecting the world,” Barnes said.

Allen said mastering comedic timing is key to her role as Bottom … “part of the time making an attempt to be Pyramus, in a very pompously silly ‘Bottom’ sort of way. The most challenging thing about playing Bottom is getting the comic timing right. There is an old theater saying, attributed to some actor or other’s last words (the source is in doubt), that “Dying is easy. Comedy is hard.” But it’s true. At least for me, comedy is much more difficult than drama. You have to be much more precise in your delivery with comedy. If you’re just a little bit off, the joke won’t get through to the audience.”

Allen has experience in gender-bending roles as she has been cast in “gender-blind” roles in productions in Nittany Theatre at the Barn in Boalsburg.

“In Shakespeare’s day, men played all the roles. It would have been scandalous for a woman to perform on stage. But in the 21st century, gender-blind casting is becoming more common. In fact, the last two parts I’ve played were originally male roles: John Dickenson, in an all-female production of “1776,” at Nittany Theatre at the Barn in Boalsburg (in which women played all the parts, and played the men’s roles as men). And, I played Juror No. 8, in “12 Angry Men” (at the same theater). I had the part Henry Fonda played in the movie. In that case, half of the jurors were female, played as women, including the two major roles.”

“I have immense respect for my fellow actors in this cast. They are brilliant, and hilarious,” Allen said. “And our director, Tom, has taken the comedy in this show and run with it — I mean, move over, Three Stooges! He’s pushing it as far as it will go, and I love it! I’m confident that Tom’s going to help me bring out the comedy of Bottom’s role. What I love about the play is that it’s hilarious, but it’s also about love and friendship winning out in the end. The show is pure delight. I hope audiences will come out and indulge, because we can all use some joy, right?”