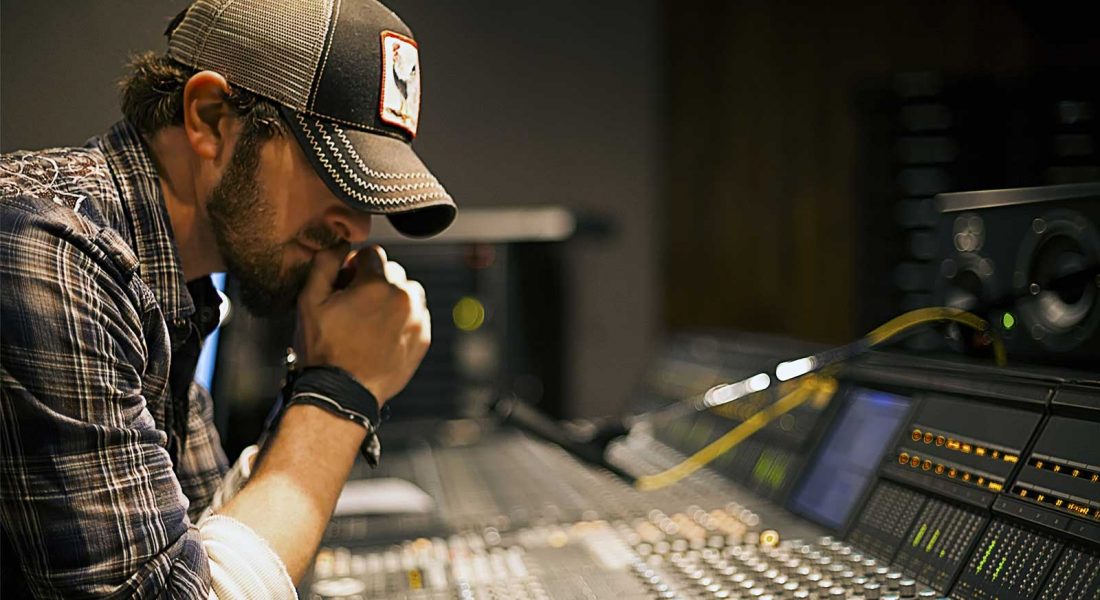 Courtesy photos Brian Davis, one of the songwriters for the eighth installment of “Songs & Stories,” sits at a soundboard working on a song.

Kick off 2020 with the eighth session of Nashville Songs and Stories at Altoona’s Mishler Theatre Jan. 17 with songwriters Brian Davis, Cliff Cody and David Lee.

All three country boys have penned multiple hits and toured nationally, according to organizers at Round the Mountain Music, hosts of the intimate, all-acoustic shows.

Nashville Songs and Stories has added a “fan experience” pre-show opportunity to meet with the songsters. For $49, attendees reserve a seat, enjoy an intimate meet and greet party which includes onstage photographs with the artists, signed show poster and other swag. Previously offered on a limited basis to show sponsors and supporters, JT Garber said Round The Mountain decided to expand the offering and monetize it — as is common practice within the industry.

“We offer area residents the opportunity to experience the very best of Nashville without leaving Altoona,” Garber said. “Each show is a one-of-a-kind ‘in the round’ — rarely seen outside of Nashville. The captivating storytelling and acoustic performance style will delight all music lovers, not just country fans.”

“These guys have it all — incredible stories, vocal power and polish,” he said.

Area residents are likely to be more familiar with the trio’s prolific body of work.

Cody, who hails from Somerset, Ohio, appeared on the ABC TV talent show, “Rising Star”, in 2014 and been a regular at the Key West Songwriters Festival. He’s also opened for Dwight Yoakam, David Allan Coe, Travis Tritt, Chris Young, The Charlie Daniels Band and many others.

Lee is a Grammy-nominated songwriter for Tim McGraw and Faith Hill’s “I Need You,” and scored Top 10 hits with “Now You See Me Now You Don’t,” by Leann Womack and “Before I Knew Better” by Brad Martin. His first number one song “19 Somethin'” was performed by Mark Wills and was followed by Montgomery Gentry’s “Lucky Man.”

Davis doesn’t consider himself “just a country music” fan as he grew up listening to all types of music sharper-edged rock, rap and reggae while growing up in Balboa, a small North Carolina town.

“I’m a huge Bob Marley fan,” he said. Listening to a variety of musical genres and styles helps keep his own songwriting fresh. “I write about 150 songs a year so I spend a lot of time thinking about music. I’ve always considered myself a songwriter before anything else.”

Appearing with Cody and Lee, whom he called “his boys,” will also spark his creativity so audiences may be treated to new material. Davis said he is looking forward to visiting Altoona with “his boys” Cody and Lee and to the theater’s setting. Davis has toured nationally with Bradley Gilbert, another co-songwriter, which brought him as close as the Bryce Jordan Center, a large, stadium venue in contrast to the Mishler.

“This will be very intimate and interactive,” Davis said. “It’s a privilege to do shows like this … it is so intimate and we want the audience to feel free to ask questions and we’ll share our stories.”

The Altoona show offers Davis an opportunity to be a fan as he’s a self-described “massive fan of David Lee who has mentored me. So, I’ll not only be working but I’ll be fan-girling, too.”

Among all his many songs, Davis considers “One Hell of An Amen,” co-written with Gilbert as among the most meaningful and impactful. When touring with Gilbert, Davis explained how he likes to watch the audience when Gilbert performs the song about a Green Baret losing his friend.

“Songs have different functions. They can start a party or keep a party going. But I think this song is one of the most impactful. This song has become therapy for people going through a difficult situation,” he said. “I watch this grown men among men … these Seals and Rangers and Green Berets — these mountain of men — just lose it. This is therapy for them.”