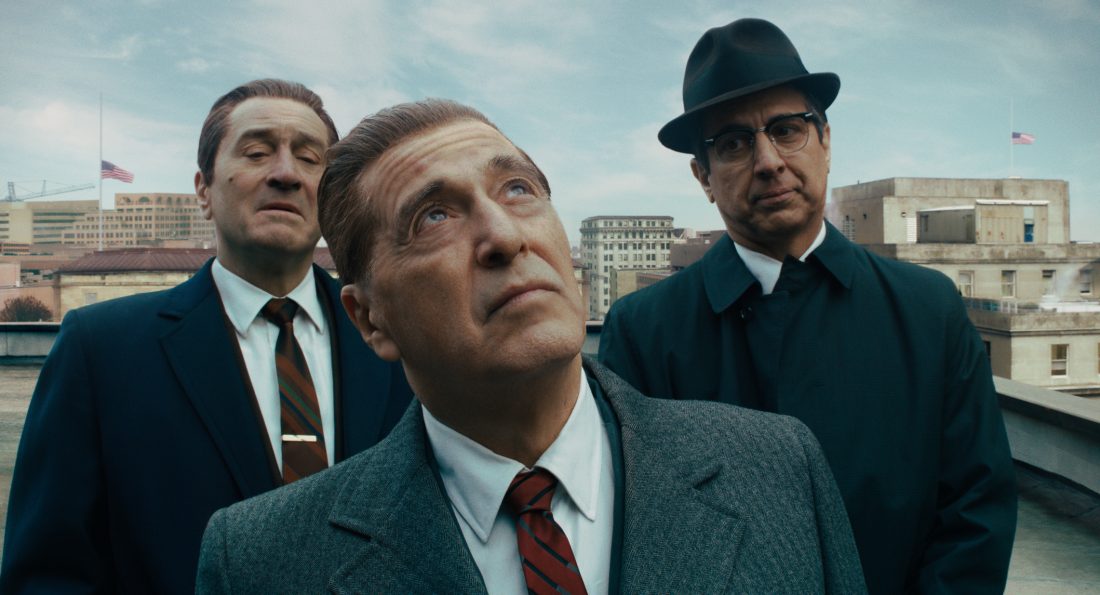 The Associated Press This image released by Netflix shows (from left) Robert De Niro, Al Pacino and Ray Romano in a scene from “The Irishman.” On Monday Pacino was nominated for an Oscar for best supporting actor for his role in the film.

Those four were among the nine films nominated for best picture, in nominations announced Monday to the 92nd Academy Awards. The others were: “Parasite,” “Little Women,” “Marriage Story,” “Jojo Rabbit” and “Ford v Ferrari.”

While “Joker” was expected to do well Monday, the academy’s overwhelming support for a movie that was far from a critical favorite was unexpected. The film’s nominations included best actor for Joaquin Phoenix and best director for Phillips.

The 10 nominations for “The Irishman” tied the most for a Netflix film, following “Roma” last year. Scorsese (a one-time winner) was nominated for best director for the ninth time. The film also won nods for Al Pacino, Joe Pesci and its de-aging special effects.

“1917” followed up its Golden Globes win and strong opening weekend at the box office with nominations not just for its technical achievement (including Mendes’ directing and Roger Deakins’ cinematography) but for best screenplay, too.

“Once Upon a Time… in Hollywood” was also nominated in just about every category it was expected to, including Tarantino for directing and screenplay, best actor for Leonardo DiCaprio and best supporting actor for Brad Pitt.

For the 87th time, the academy selected all-male directing nominees despite a year in which women made historic gains behind the camera. The most likely candidate was Greta Gerwig (“Little Women”), who was the last woman nominated, two years ago for “Lady Bird.” “Congratulations to those men,” said Issa Rae, who presented the nominees alongside John Cho.

There were some surprises. Awkwafina, who was poised to become just the second Asian American nominated for best actress (the first, 1936 nominee Merle Oberon, hid her South Asian heritage), wasn’t nominated for her acclaimed leading performance in “The Farewell.” Also overlooked was “Frozen 2,” the highest grossing animated film ever; Beyonce, for her “Lion King” song; or the hit documentary “Apollo 11.”

Most glaringly, Jennifer Lopez, long considered a supporting actress front-runner for her performance in “Hustlers,” was also denied her first Oscar nomination.

Those oversights left the Oscars with their least diverse field since the fallout of #OscarsSoWhite pushed the film academy to diversify its membership. The only actor of color nominated was Cynthia Erivo, the British actress, for her Harriet Tubman in “Harriet.”

The nominees for best supporting actor are: Tom Hanks, “A Beautiful Day in the Neighborhood”; Anthony Hopkins, “The Two Popes,”; Brad Pitt, “Once Upon a Time… in Hollywood”; Joe Pesci, “The Irishman”; Al Pacino, “The Irishman”.

The nominees for documentary feature are: “American Factory”; “The Cave”; “The Edge of Democracy”; “For Sama”; “Honeyland.”

The nominees for best animated feature film: “How to Train a Dragon: The Hidden World”; “Toy Story 4”; “I Lost My Body”; “Klaus”; “Missing Link.”

This year’s nominees will for the second straight year go without a host.

The 92nd Academy Awards will take place Feb. 9 in Los Angeles at the Dolby Theatre. ABC will again broadcast the show, viewership for which last year rose 12% to 29.6 million.

Taking for the greater good

Options abound to give seniors ability to age in place