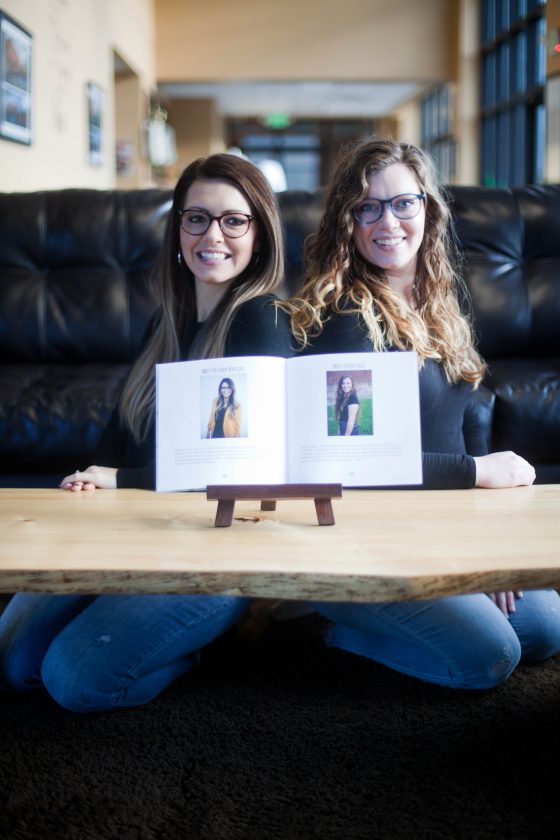 Courtesy photos Author Bethany Marshall and illustrator Sarah Vogel pose for a photo with the book “Pickles and Prayer.”

Bethany Marshall wants kids to know that even if they don’t see results right away, God answers prayer.

To demonstrate her point, she has written a children’s book with illustrations by Sarah Vogel, titled, “Pickles and Prayer.”

To introduce their project to children and their families, the writer and artist will hold a book signing from 1 to 4:30 p.m. Saturday, Feb. 1, at The Clay Cup, 1304 11th Ave.

Published by Cathy Sanders Book Designs, the book also is available at Amazon.com and Barnes & Noble. It retails for $17.99; a Kindle version is $5.

Marshall and Vogel, both of Altoona, each had a desire to express their talents in a book.

“I have always wanted to write a book,” Marshall said. “It’s been in my heart for awhile.”

She said in 2016 an evangelist told her she was going to write books.

“He confirmed something I already wanted to do,” she said.

Marshall said she wanted the book to be for children because she loves kids. As a behavioral health worker for Blair Family Solutions, she helps at-risk children deal with emotions and circumstances so they can be successful at school.

Through “Pickles and Prayer,” she said she wants children “to learn that prayer is so simple, but so powerful.”

Marshall learned about prayer in her own childhood when her family served as missionaries in Jamaica for 4.5 years.

She said they often prayed for their needs from dinner to housing.

“I would pray and ask God for things, and they would just come,” she said.

Then, her dog got sick.

“It was extremely skinny and losing weight. It had a disease,” she said. “I got discouraged and said I was not going to pray anymore.”

She said her mother urged her to not give up. Marshall said she continued to pray for the dog, and it was healed.

Her prayers concerning the book also were heard.

About a year and a half ago, she said she prayed before bed and asked God to help her write a book. She said she woke up about midnight and God deposited the book in her mind.

“I wrote it in 45 minutes,” she said, “The thoughts came so fast I couldn’t keep up with what God was downloading.”

The thoughts were about how pickles, one of her favorite foods, related to prayer.

“I have always loved pickles since I was a little girl,” Marshall said, adding that they need to be of the dill variety.

She likes them so much that for her birthday one year Marshall’s parents presented her with a case of dill pickles that her mom had made from cucumbers raised in her dad’s garden.

A recipe on how to make them is included in the book for other dill pickle lovers.

Three days after the words for the book came to her, Marshall contacted Vogel, a self-taught artist, about illustrating it.

Unbeknowst to Marshall, Vogel said she was thinking about her artwork and what she could do that would be new and different for her next project,

“Illustrating a children’s book came into my mind,” Vogel said. “A week later, Bethany called me to illustrate her book. I thought, ‘that’s the next thing.'”

She said the two of them discussed their vision and were both on the same page as far as the direction the artwork should take.

Vogel said her illustrations of a seed that eventually blossoms into a cucumber show that growing things is a process, just like prayer and faith in Jesus is. She said faith in the Lord starts out like a seed, then He does something and faith grows.

“When we pray and have faith, the Lord comes through with an answer in the end,” she said.

“It is an awesome book for younger children,” Vogel said. “The pictures illustrate the story. I would read it to 2- and 3-year-olds. It’s also a good book for kids learning to read, 5- 6- and 7-year-olds.”

During the six months that Vogel was doing the artwork, Marshall looked for a publisher.

She said she chose not to self-publish because, “I wanted to do it the right way. I wanted it to be done with excellence.”

Marshall said it is more expensive to do so, adding that the many illustrations add to the costs. The book also complies with the world trade standard so it can be sold around the globe.

Along with a purchase of the book, patrons at the book signing will receive a “pickle” bookmark with the Scripture from Isaiah 61:11 inscribed. In the New International Version it reads: “For as the soil makes the sprout come up and a garden causes seeds to grow, so the Sovereign Lord will make righteousness and praise spring up before all nations.”

Marshall said she sees the book as a “tool to bring family members together.”

She said she hopes that it might be a springboard for parents to pray with their children, perhaps at bedtime.

“It’s a message for any stage of life,” she said.