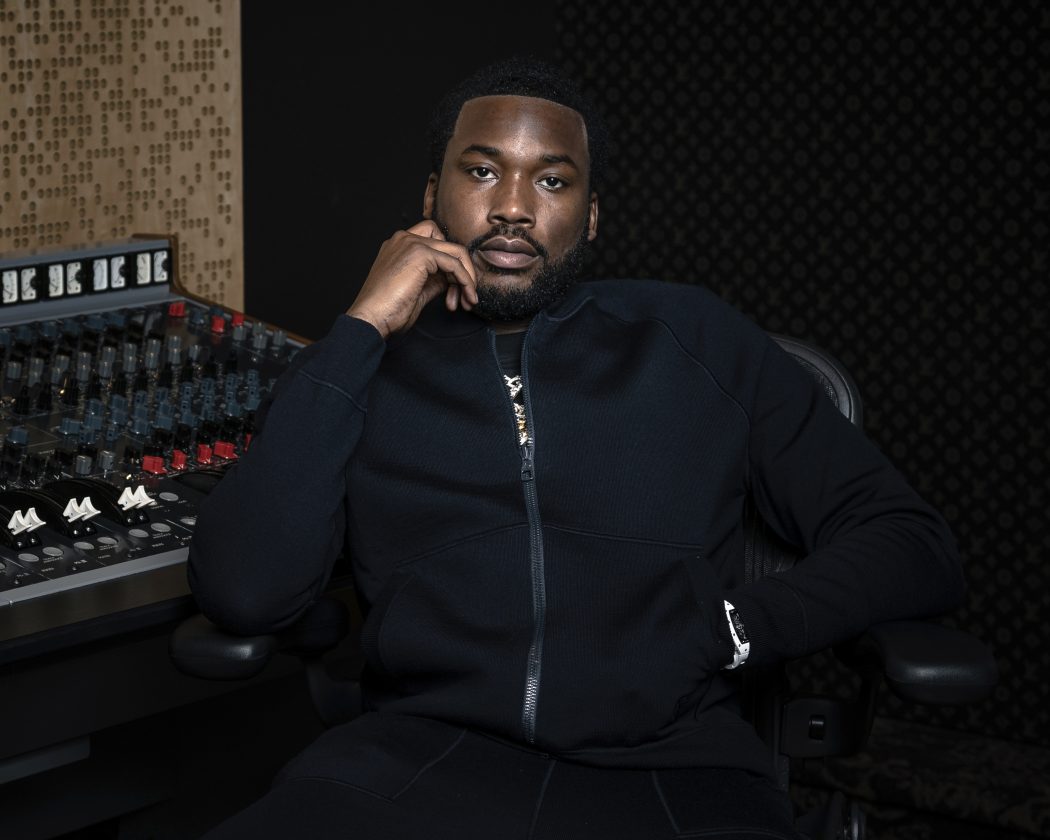 The Associated Press This Dec. 4 photo shows Meek Mill posing for a portrait at Jungle City Studios in New York. Mill, born Robert Rihmeek Williams, is competing for a Grammy Award for best rap album with the platinum-seller “Championships.”

NEW YORK — On “Oodles O’ Noodles Babies,” a song on Meek Mill’s latest album, he raps about childhood struggles battling everything from poverty to violence, and proclaims: “We couldn’t afford no clothes/It was hand me down/Who would think a (dude) get a Grammy now?”

The Recording Academy. Mill is a leading contender to win a Grammy after receiving his first-ever nomination last month.

“I always try to speak things into existence,” the rapper said in an interview with The Associated Press last week. “That’s always been my thing. If you follow my music and look back, everything I said in the past that I wanted, it came into fruition.”

Mill, born Robert Rihmeek Williams, has spent the last dozen years grinding on the music scene, releasing mixtapes, EPs and albums, gaining new fans and earning credit for his respected lyrics and storytelling, while also becoming a hometown hero in his native Philadelphia.

Now, at the 2020 Grammy Awards, he’s competing for best rap album with the platinum-seller “Championships.”

“It feels great to be acknowledged for your talents,” he said at a recording studio where he’s working on new music. “I try not to focus my eyes on accolades and (stuff) like that. …I’m like a street rapper (and) we’re the last people to be nominated … I just try not to put my thoughts (or) let my faith and my energy go into someone judging me that can bring your spirits down, lift it up, so I just stay in my zone. If I get one that’ll be the greatest (thing) in the world, though.”

The 19-track “Championships” was created at a pivotal time in Mill’s life — it was released seven months after Mill, 32, was released from prison following a five-month campaign by his supporters to get him out of jail for decade-old gun and drug convictions (an appeals court overturned his convictions in July).

He said he pulled from his real life as he wrote the songs for the album: When he penned “Trauma,” which includes lines about being in jail and dealing drugs, he was preparing to go to court for his own case. During the time he wrote “Respect the Game,” he was going “through something with someone around me counting the money in my pockets; your friends see you making a lot of money and they’re counting your money for you.”

At the Grammys, Mill’s competition includes Tyler, the Creator’s “Igor,” 21 Savage’s “I Am I Was,” YBN Cordae’s “The Lost Boy” and “Revenge of the Dreamers III,” the compilation from J. Cole and his Dreamville labelmates.

Mill, who joined mentor Jay-Z and others earlier this year to form Reform Alliance, a coalition that lobbies for changes to state probation and parole laws, said his role as a reform advocate helped his music reach new people, and ultimately helped him land a Grammy nomination.

“I got billions of impressions just from my case. I just happened to land in front of that. It was a (messed) up thing. Media caught on. It was a big media thing. People got a bird’s eye view of who I am,” he said. “Now when you see Meek Mill performing on the ‘Colbert’ show, or see Meek Mill on ‘Ellen,’ you might tap in.”

“I’m Jay-Z’s young bull, so I get to throw that special call in,” he said of clearing the sample.

“I don’t remember who called who, but he gave me the song, sent it to me. I finished that song probably the day before my album came out — very last song,” Mill said.

On the track, Mill raps about one of the current “it girl” celebrities as as object of desire: “I got Lori Harvey on my wish list (that’s Lori)/That’s the only thing I want for Christmas (true story, uh).”

What does Mill want for Christmas this year?

“I want my chick for Christmas,” he said, referring to his real-life girlfriend. “When you rapping you just talking (stuff). You gotta ask Lori what she wants for Christmas nowadays.”