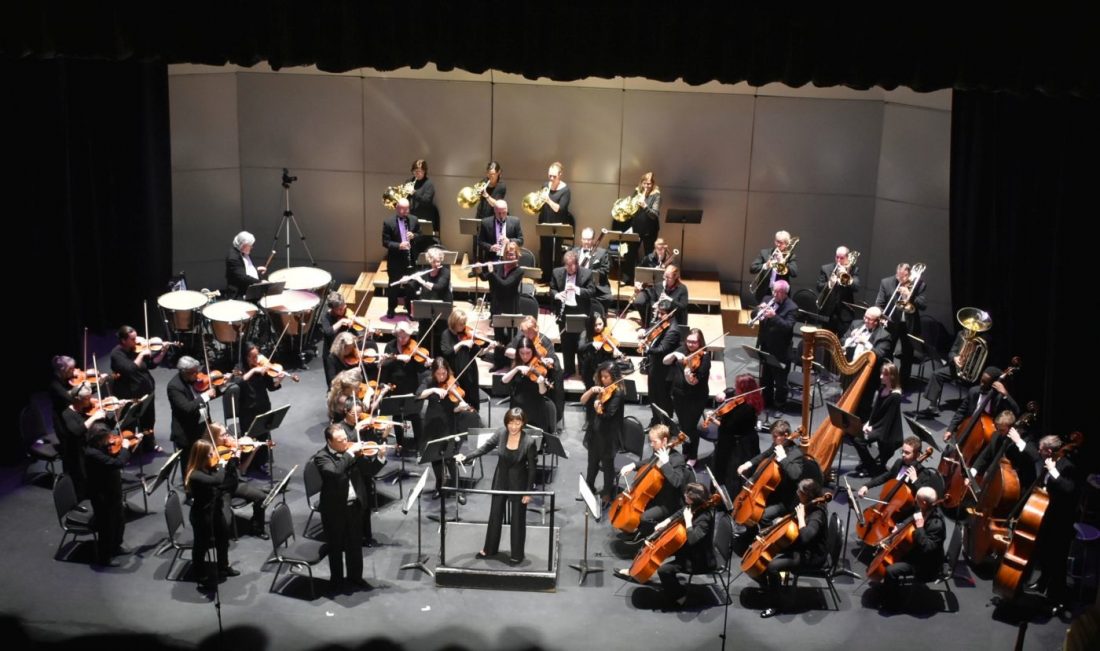 The first weekend in December kicks off with a double helping of the Altoona Symphony Orchestra in full Christmas mode.

On Dec. 7, the symphony presents “Home for the Holidays” and is joined by the Blair Concert Chorale. The symphony is among the guests to appear in a matinee concert Dec. 8 to benefit a local organization that funds research into childhood cancer and supports local children..

Maestra Teresa Cheung said, “We are delighted that the Blair Concert Chorale will be joining us for our Christmas season kickoff concert. We have not totally finalized on the titles that they will be performing on their own at our concert, but one of our (numbers) will be the whimsical work called ‘The Musicological Journey of the Twelve Days of Christmas’ by Craig Courtney. It is based on the Christmas carol ‘The Twelve Days of Christmas,’ and is arranged whimsically in all sorts of musical styles throughout the history of music.”

The Blair Concert Chorale, according to its website, formed in 1987 by combining the Keystone Chorale and the Altoona Choral Society, which in turn traces its roots back to 1933. In 1995 a tuition-based children’s choir was added to expose, educate, and develop youth between the ages of 7 and 17 to classical music.The adult chorale today is made up of over 40 singers (all volunteers) from Blair, Bedford, and Cambria counties. The children’s choir consists of up to 30 young people from the greater Altoona area.

The chorale, according to Cheung, will lead the audience in the festive singalong.

“It is a perfect time to be partnering with them because their concert will be one week after ours. We hope to help them spread the info of their exciting concert with John Rutter’s “Gloria” in the following week.”

Benefit to support children with cancer

The ASO will also perform Dec. 8 at “Kiera’s Dream” a concert to raise funds for the Brian Morden Foundation. The foundation was created by Brian’s mother Dawn Morden in 2003 to benefit childhood cancer research and provide scholarships to people who are positively impacting the lives of others, according to Mirror archives.

“We’re hoping to have a great crowd for ‘Kiera’s Dream’,” Dawn Morden said. “… it’s looking very hopeful that we’ll be able to donate at least $25,000 to a Pittsburgh Children’s Hospital researcher and of course help our local children battling cancer.

Kiera Chirdon, a talented local 16-year-old violinist, lost her life to cancer before she was able to fulfill her dream of holding a benefit concert for the Brian Morden Foundation. Both Kiera and Brian Morden shared a love of music. The concert is to honor them and other childhood cancer warriors. She’d been diagnosed with Epithelioid Sarcoma at the age of 9.

The AYO will be under the direction of Kelly Detwiler, Kiera’s orchestra director, with a special performance by Victory Brinker, a 7-year-old-opera singer from Latrobe.

Brinker sang the national anthem at the Pirates’ home opener earlier this year and also before a Utah Jazz basketball game.

The ASO will be playing one of Brian Morden’s father’s arrangements from the time when he was conductor of the ASO, Dawn Morden said.

“I am also very excited that we will be using three wonderful arrangements by Frederick Morden, who is one of my predecessors here with the Altoona Symphony,” said Cheung. ” … I have always heard amazing things about Fred’s Christmas arrangements for the orchestra and we are so thrilled to get a chance to perform them again.”

The former ASO conductor has donated his arrangements for use, his ex-wife said, including “his gorgeous ‘Silent Night’ arrangement for the ASO to play on our concert. I was really happy to hear that because Brian was certainly at many of Fred’s concerts and rehearsals from 1984-1995.”

Additionally, concert attendees will have the chance to buy raffle tickets “for some wonderful prizes, and there will be surprises!! The entire afternoon should be very entertaining and heart-warming … a great way to start the Christmas season,” Dawn Morden said.

Other special guests include the following violinists: Roger Shingler, Kiera’s teacher who will be playing her violin; Katelyn Plunket, Kiera’s cousin, and Jake Kibler, good friend, both played in AAJHS and AAHS Orchestras with Kiera; Ryan Kimberling, friend since grade school, played in AAHS Orchestra with Kiera; Maddy Rairie, met Kiera through Roger Shingler and played at her funeral. Additional musicians include flutist Barbara Fagan, Kiera’s CCD teacher and played with Kiera at her church; trumpeters David Maller, who plays at Kiera’s church and Paul Cassarly, winner of a Brian Morden Foundation scholarship in 2011.

Also appearing will be Victory Brinker, a 7-year-old-opera singer, who sings with a four octave range in six languages. A Latrobe, Pa., native, she has spent the past year and a half performing across the country most notably at Carnegie Hall, the Apollo, NBA games and for the Pittsburgh Pirates 2019 Home Opener.

She is a frequent featured performer with the Pittsburgh opera group Aria412, and will be singing throughout the month of December for WQED and Pittsburgh Public Theatre’s holiday show Lights and Legends.

Victory is also an actress completing roles in three movies, two of which are due out in 2020.