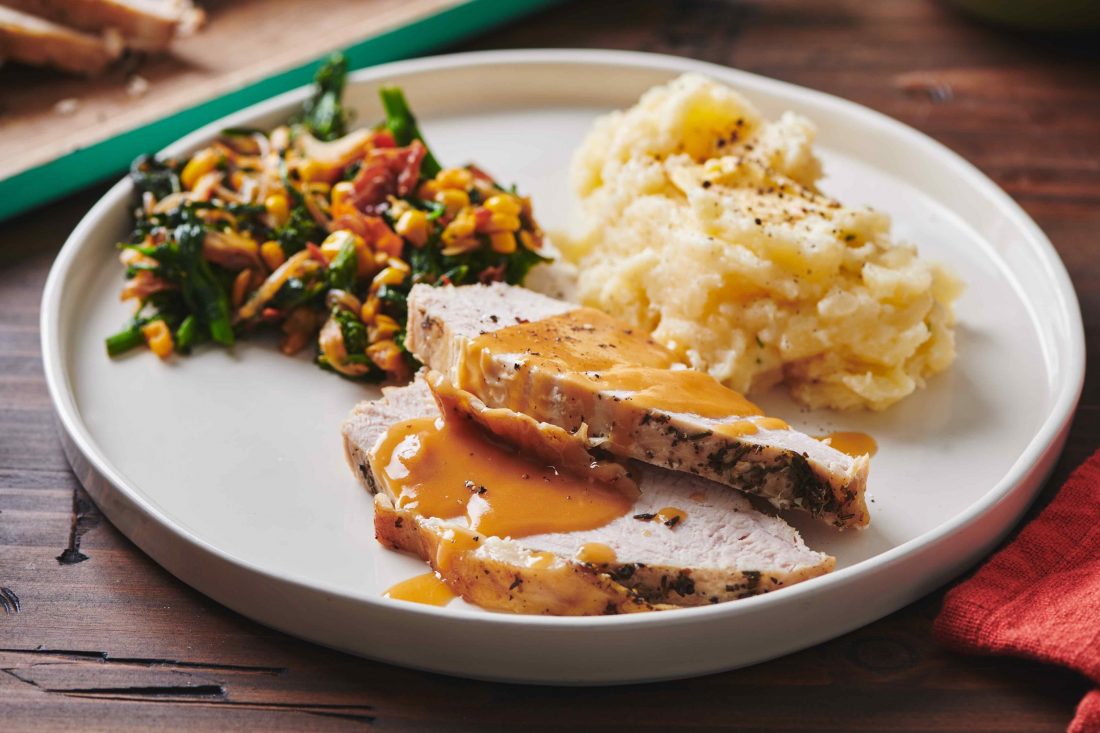 The Associated Press This May 2019 photo shows a plate of turkey, mashed potatoes and gravy and a side of sauteed broccoli rabe, corn and onions with crispy bacon, on a table in New York.

Hosting Thanksgiving isn’t for the faint of heart. There are more dishes than you might usually serve. More timing concerns because of that. More pots and plates to wash. And perhaps more family dynamics, buried deep below the surface for the other 364 days a year, that threaten to bubble up through the gravy.

Well, I can’t do anything about your family dynamics (if I could I would start closer to home). But I can share tips and tricks I’ve picked up over the years, along with advice from some other Thanksgiving Dinner pros.

There are two basic ways to make potatoes for mashing:

Boil and then peel them. Peeling potatoes can be a drag. But if you boil your potatoes whole in their skins until tender (about 20 to 25 minutes), then transfer them to an ice bath (a big bowl of ice water) and let them sit for 20 to 30 seconds, the skins will slide right off. Then you can go right ahead and mash them.

Bake your potatoes. Megan Scott and John Becker, authors of the new ”Joy of Cooking,” explain, “Baking the potatoes dries them out a bit more, allowing for maximum butter/cream/dairy absorption and a fluffier texture. You can bake them at the same time as the turkey.” A medium russet potato will bake in approximately 1 hour at 400 degrees Fahrenheit. Just pierce them a few times with a knife and set them directly on an oven rack. Once baked, cut them open and scoop out the insides for mashing.

As Scott and Becker note, “A turkey is actually two roasts in one. The breast is thick, lean and will begin to overcook the minute it exceeds 165 degrees Fahrenheit. The leg quarters, on the other hand, are bonier, fattier and practically impossible to overcook. In fact, we find that they have the best texture when cooked to 175 degrees or above.”

They recommend separating the legs from the breast toward the end of cooking to get both dark and white meat perfect.

“When the breast reaches an internal temperature of 155-160 degrees Fahrenheit, remove the turkey, and carefully (using a dish towel and a sharp knife) cut off the whole legs,” they say. ”Return the leg quarters to the pan and cook them until they register an internal temp of 175 degrees. Meanwhile, tent the breast loosely while the legs finish cooking.”

If you want to warm up the breasts before cutting and serving, they suggest adding them to the back of the pan at the end. True, you don’t end up with a whole turkey dramatically presented and carved at the table, but Scott and Becker are right that “your guests will appreciate a properly cooked turkey more than a turkey as centerpiece.”

Sure, you can use a mix, but Daniel Leader, cookbook author and bread baker in New York’s Hudson Valley, suggests making your own. You might be surprised by the bread he recommends, and an intriguing secret ingredient: “I love to use slightly dark, gnarly sourdough bread with its nooks and crannies for stuffing. I cut up a little over a pound of bread into 1-inch cubes and mix with a generous 1/3 cup of local bourbon from Tutthilltown Distillery nearby in Gardiner, New York. I saute a mix of onions, celery, carrots, local honey crisp apples, garlic, fresh thyme, rosemary, combine it all, and add chicken stock as needed.”

Bill Smith, recently retired chef at Crook’s Corner in Chapel Hill, North Carolina, has had the good fortune to be a guest at an old friend’s home for years, and his sole task is to make the gravy. He does a lot of the prep ahead of time, and lets the giblets do some of the heavy lifting.

Put the neck and all the giblets except the liver in a saucepan of cold water and simmer until they are well done, he says. You can do this the day before and degrease the cooled broth later. Chop up the gizzard and heart and shred the meat from the neckbone. Then, just before dinner, when the bird is done, move it to a platter to rest. Pour off as much fat from the roasting pan as possible, while saving as much of the juices as you can. In a jar with a tight lid, shake a few tablespoons of all-purpose flour into the cold broth until it is completely combined. Put the roasting pan with the remaining cooking juices on the stove over high heat.

“Grab whatever wine is nearby (I have used both red and white) and pour a generous cup into the pan,” Smith says. ”Use a whisk to swirl it around and reduce it by half. Add your broth-flour slurry, pouring it through a sieve, and whisk and reduce to the thickness that you prefer. Taste for salt and pepper and stir in the chopped giblets.”

If you are making your own pie crust, first, wow, good for you. And second, instead of cutting the butter into the flour mixture, which is messy and time consuming, try grating it. Take cold butter straight from the fridge and grate it on the large holes of a grater. Mix the flakes into the dry ingredients, then add your liquid. This also works for streusel toppings.

Isa Chandra Moskowitz, a vegan chef and author, suggests using olive or coconut oil instead of butter to help turn vegetarian dishes vegan. This works for stuffing if the bread and vegetable broth are also vegan, for candied yams, and for any vegetable you need to saute or roast. She also suggests making smaller, vegan versions of dairy-rich dishes. For mashed potatoes, for example, “set aside a few potatoes for your vegan guests and mash with olive oil, salt and pepper for yummy smashed potatoes.”

While you can find vegan roasts to stand in for the turkey, Moskowitz likes lentils as a protein.

Set the table the night before, or earlier. All of it — glasses, centerpieces, pitchers for drinks, etc. Take out every serving platter, bowl and utensil you will need, and create a little label saying what will go into each dish.

Get thee a cooler: Fridge space is a hot commodity on Thanksgiving, so buy yourself some extra real estate with a big cooler or two filled with ice. Use these for drinks, whipping cream, salad dressing, anything that doesn’t need to be sitting on a flat surface in the fridge.

And now, you’re ready. May your holiday be as smooth as your gravy, and vice versa.