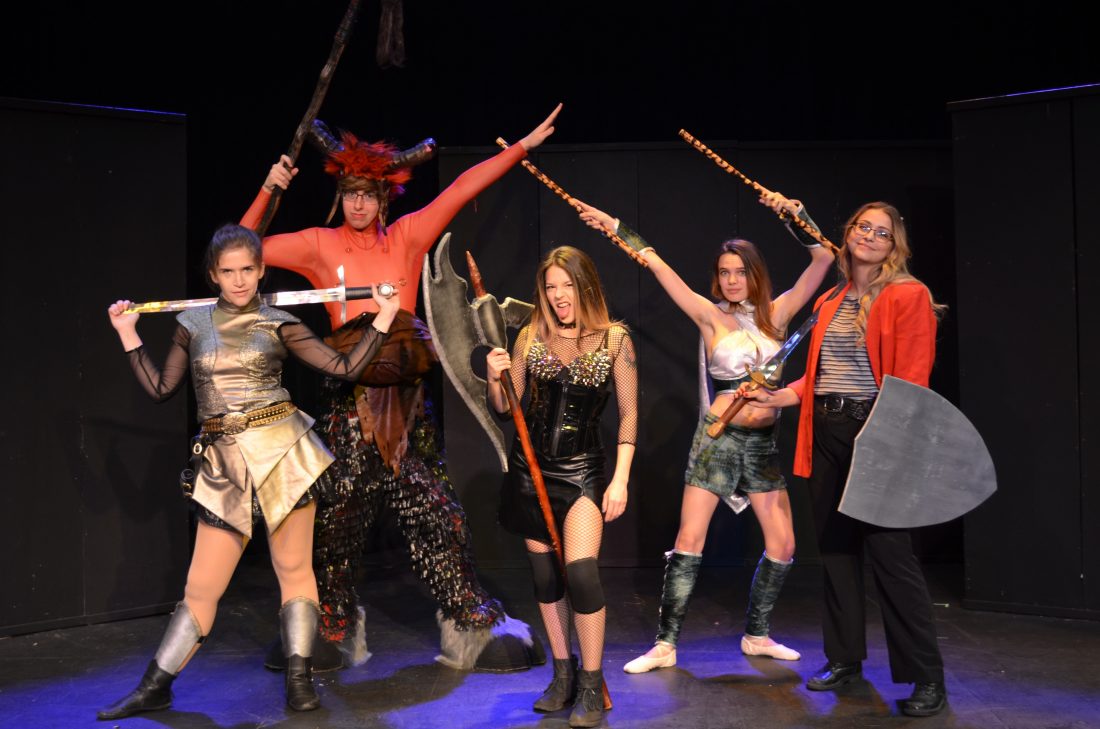 “She Kills Monsters” presented by Things Unseen Theatre and written by Qui Nguyen, is as magnificent in content as it is in its costume design.

The dramatic comedy is about two sisters who have opposite personalities.

The death of one sister, Tilly, who loves the game “Dungeons and Dragons” consumes the other sister, Agnes, with an unending grief.

Agnes delves into the 1990s video game world of “Dungeons and Dragons” in an effort to learn more about her deceased sister.

“I knew from the moment I had sat down with the script that I wanted to be a part of the production in any capacity. My character is dealing with an all-consuming grief. It’s something I, and I’m sure everyone can relate to. It was her that I became interested in. I wanted to bring her grief to life,” said Amanda Mascitelli who plays Agnes in the upcoming production.

Valerie Stratton, co-artistic director and co-founder of Things Unseen Theatre, said in Agnes’ quest to learn about her sister she also meets others. She said, “Agnes reaches out to a group of people to find out why they are so interested in that game.”

Mascitelli said the upcoming show blends reality and fantasy seamlessly. “It’s about growth and acceptance and monsters. The play has many heavy themes and spans multiple genres, and it’s truly a show for just about anyone who likes fantasy,” she said.

Stratton agrees. “We don’t want anybody to think it (the play) is only for people who know and like ‘Dungeons and Dragons.’ It is still a very interesting show and everyone will be impressed by the staging and with the costumes,” she said.

“There’s alternating scenes and they reenact scenes from ‘Dungeons and Dragons.’ There’s amazing costumes and props that are very large — there’s dragons, monsters, fairies and elves. In the fight scenes Agnes learns about her sister through the reenactment of this game,” said Stratton.

William Benson Jr., chief of monster construction, has been working tirelessly on the grand costumes. “I’m taking the costumes and building them up to the quality only our show can have. The costumes are being textured and painted by me. The monsters onstage will look like the real creatures they are meant to be. Anyone from ‘Dungeons and Dragons’ will recognize them,” he said.

There are 24 monsters in the show. Fifteen have been made from scratch and the others have been modified to fit the standards of this upcoming production.

Emily Evey, director of the play, said that the monster construction is a core part of the show. In an email she wrote, “In lieu of set construction, we have focused on efforts to ‘Monster’ construction. The set is very minimalist, but the costumes and monsters really take you into the universe with Tilly and Agnes.”

Evey also added that the costume and monster crew has been working diligently to perfect the designs.

“Our costume crew and monster crew have been working tirelessly for almost six months to iron out the accuracy of these monsters and characters. For perspective, our biggest monster is revealed at the final battle of the show and she takes up most of the stage. We have been hiding images of her to reveal to the audience for months and we completely reconstructed her from the bones up,” she wrote.

Even though the show is about monsters, it is intended for a more mature audience.

Evey wrote, “This show is definitely rated PG-13 or higher. It genuinely depends on the parent’s interpretation of the script. We have people 12 years old and up involved in the production! In fact, half the actors are all under the age of 18. There is swearing, sexual themes and violence. If you are considering bringing your teen and want more explicit answers, please message our ‘Things Unseen Theatre Company’ Facebook page for more information.”

While the content may be mature, the themes of the show are universal and center on grief, family and conviction.

Stratton echoed that sentiment. She said, “It’s about fantasy, but also the human emotions of connecting and about family connections, love and a lot of things.”

What: “She Kills Monsters”

Where: The Church in the Middle of the Block Cultural Center, Altoona.

Admission: Tickets are $10 for seniors and students and $12 for general admission.

For tickets or more information: Visit www.centralpa tickets.com, Thompson Pharmacies or purchase tickets (if available) at the door.