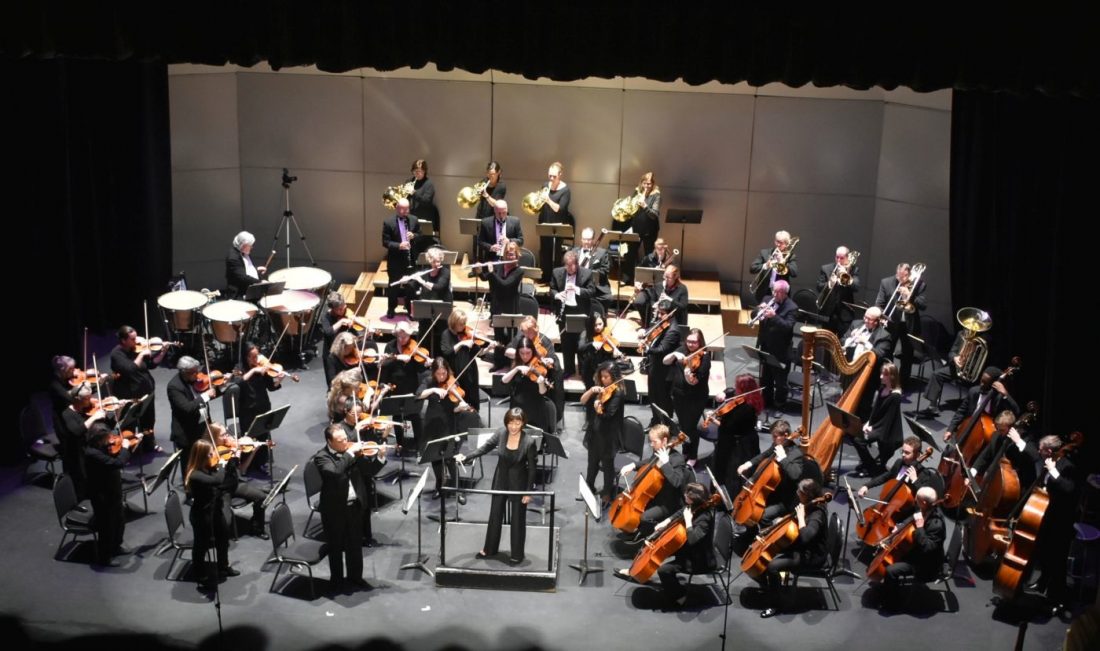 Courtesy photo by Harold Dertinger The Altoona Symphony Orchestra, under the direction of Maestra Teresa Cheung will perform its next concert at 7:30 p.m. Nov. 9 at the Hollidaysburg Area Senior High School in Hollidaysburg.

On the 30th anniversary of the Berlin Wall’s fall, The Altoona Symphony Orchestra, in conjunction with Penn State Altoona, presents the perspectives of two, early 1940s composers from two different continents and circumstances.

Under the direction of Maestra Teresa Cheung, the ASO presents “Besieged” on Saturday, Nov. 9 at the Hollidaysburg Area Senior High School Auditorium. The symphony — with a bolstered bass section — performs for the very first time Dmitri Shostakovich’s Symphony No. 7. Entitled “Leningrad” it’s an 80-minute piece in four movements, according to Cheung. “Lenin-grad” is a musical tribute to lives altered and lost during the Soviet Union’s/Russia’s resistance and triumph against Hitler in WWII.

She described the four-movement symphony as a “Russian bear” for the musicians with 40 pages of music to learn and rehearse.

“It’s huge because everything is augmented — extra powerful,” Cheung said, so the audience understands “the horror and struggle going on” during the 2¢ year siege of Leningrad (now Saint Petersburg) which lead to mass starvation and near-constant military assault.

To create massive sound, joining the symphony will be triple woodwinds (2 flutes, piccolo, 2 oboes and English Horn, 4 clarinets (piccolo and bass); 2 bassoons, a contrabassoon, 4 horns, 3 trumpets, 3 trombones and a tuba; harp, piano, timpani plus 6 percussion, and full complement of strings.

“This piece is very rarely performed and the community deserves to hear this. I think this is, perhaps, the closest the audience may come to experience a war themselves,” Cheung said. While some parts are “lyrical and sad” and a “remembrance of better times,” she said, the music is of a high intensity “like bullets shooting at you” and with some groups of instruments “playing in such a high register that it is like they are screaming in desperation. There is a very low bass clarinet solo that will tear your heart out.”

To provide cultural/historical context, ASO partnered with Penn State History and German professors and brought in StoryCorps, a nonprofit oral history organization, to create an audio archive to tell stories of military service in Germany and what it meant to grow up “West German” or “East German.”

These conversations with Altoona area community members will be featured during a 30-minute lecture set for 6:30 p.m. the night of the concert.

The concert necessitated a venue change; in part so it could take place on the exact date of the wall’s fall 30 years later and also for the high school’s larger stage area.

“There was a scheduling conflict at the Mishler and like it often does, it worked out for the best,” she said.

Staying in the early 1940s, the symphony will also perform American composure Aaron Copeland’s “The Common Man,” which he wrote during that intense period of history as America contemplated joining the war.

“It’s a symbol of nobility of the human spirit,” Cheung said. “We all went to war for a common reason. We were fighting for the rights of people and freedom.”

What: “Besieged,” presented by the Altoona Symphony Orchestra in collaboration with Penn State Altoona

Tickets: $35 for adults and $15 for students (includes fees) at www.altoonasymphony.org/tickets–subscriptions.html or by calling 943-2500.

What: Panel Discussion: “Experiencing and Living Through Pro-Democracy Movements;” includes those who experienced or have intimate knowledge of pro-democracy movements in Germany, Poland, China and Hong Kong, panel includes Maestra Teresa Cheung