Getting that perfect fit

Seamstresses getting harder to find 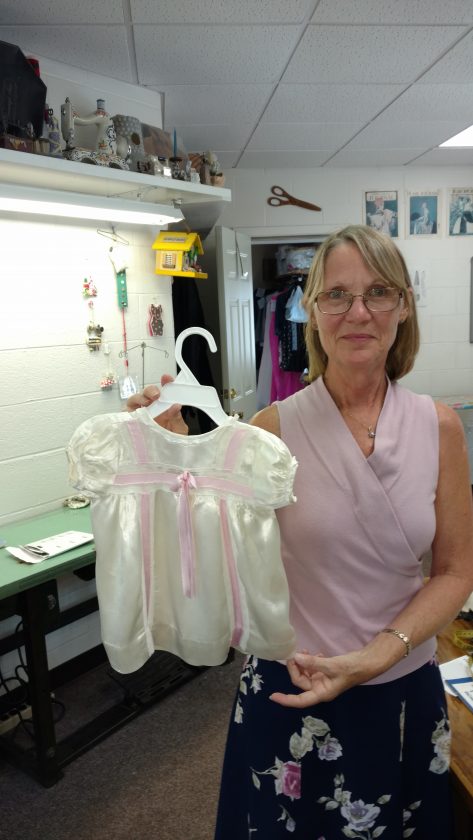 A seamstress for the past 42 years, Linda Cassarly, 60, of Altoona is sewing for a third generation of customers who hail from as far away as Philadelphia and North Carolina.

“I got a phone call from a woman in Philadelphia recently. Her daughter is a Penn State Altoona student and needs alterations done to a bridesmaid dress. I asked her how she found me and she said she Googled ‘seamstresses in Altoona’ and I was the only one listed that was still in business.”

Sewing professionally since she was 18, Cassarly said she’s watched the decline of the profession in the last decade.

“When I started, everyone sewed. Now for every one of me there’s a hundred people who are in need of a person like me,” she said. “In the ’70s, dry cleaners and retail stores had at least one seamstress on site. There were also several manufacturers in town that used seamstresses, such as the Silk Mill and Warnaco’s.”

In Hollidaysburg, Brenda Sprow, 50, owner of B K Alterations at 225 Allegheny St. agrees with Cassarly.

“It really is a lost art,” Sprow said. “Young people today don’t learn how to sew any more.”

Seamstress Karen Baney, 55, handles repairs and alterations at Monarch Cleaners in Altoona. The company also has a seamstress in their Huntingdon location. At 7, Baney learned from her mother how to hem pants and sew on buttons — basic sewing skills no longer handed down through the generations. She received additional training textile productions at vo-tech and worked for years in clothing manufacturing — from lining skirts designed by Halston for JCPenney to creating custom-ordered bridal veils and headpieces for a millinery in Rockvale, Maryland.

All three seamstresses have decades of expertise of tailoring wedding and prom attire as well as uniforms for military and police officers. Commonly, clients will bring multiple pairs of pants to be hemmed as more people patronize consignment shops or can’t find their size on the rack, Baney said.

One mother acts as a courier between her home in Altoona and children and grandchildren in North Carolina, Cassarly said, because the family can’t find a seamstress where they live.

Bob and Carole Taylor of Altoona have been Cassarly’s clients for at least 30 years as Bob served as a state trooper. The family came to Cassarly with a most challenging request when their son Mark suffered a broken neck in a swimming pool diving accident.

“He had a metal halo on his head to keep his neck and spine immobile and it connected to a chest brace. Regular clothes wouldn’t fit over it and it was two weeks before his senior year started,” his mother recalled. “She really made him look nice.”

Cassarly said that was one of her most challenging requests for alterations. More recently, Cassarly restored, cleaned and pressed a 75-year-old baptismal dress first worn by Carole Taylor so her son Mark’s daughter, Carolyn Lee Taylor, could wear her grandmother’s dress.

“It was really, really wrinkled. (Cassarly) cleaned the satin and it turned out really white and she pressed it beautifully,” Carole Taylor said. “She really knows how to do antique clothing. She is a woman of many talents.”

She has also handled requests for a mother’s wedding gown to be repurposed into a baptismal gown or into a pillow carried by a wedding ring bearer.

Baney’s noticed in recent years that people hang on to favorite pieces of clothing for years and are willing to invest in keeping it repaired.

“If a man has a favorite suit coat he’s had for 10 years but the lining is torn, he will often bring it in for me to replace the lining. And I’m seeing a trend where men like to wear their sports coats more fitted to their bodies.” One thing Baney said she can’t do: “I can’t make pants grow from a 28-inch inseam to a 30-inch seam.”

But it is common for a petite mother of the bride, such as a recent woman who wore a size 00, to bring in a gown and have it made smaller.

At B and K, Sprow said she has seen an uptick in customers needing formal wear alterations.

Up until the 1990s, Cassarly said many national retail stores and locally-owned boutiques like Fisher’s in the Pleasant Valley Shopping Center had multiple seamstresses available for customers.

As consignment shops have gained popularity, Baney said she has encountered more second-hand shoppers who bring in items for alterations — and save money compared to buying retail. Such savings is especially seen when it comes to prom gowns, but a clothing item that is baggy or too long can be altered for a more flattering fit.

Each alteration assignment is unique, Cassarly said, she has clients come by appointment and model the clothing in her presence so she can see where changes need to be made. She attended a fashion design school in Pittsburgh after high school, but faced the conundrum of employers wanting experienced sewers. And, while she was experienced in making her own clothes and obtaining an advanced education, she met resistance. So, she apprenticed — working for free — in a one-man shop before landing at Fisher’s. As her experience grew, so did the complexities of the alterations that were assigned to her. Eventually, she opened her own alterations shop.

Like Cassarly, Sprow said she began making clothes for herself from patterns and then branched into alterations — altering the fit of clothing requires a knowledge of how the piece is made and put together.

At Frye’s Sweeper and Sewing Center, Bob Frye said fewer people are making their own clothes but look to buy a sewing machine to do their own clothing alterations and repairs. Machines range from $100 for a refurbished, basic model up to more than $13,000 for highly computerized models that embroider, and quilt as well as sew.

“Quilting is very big, they love to make their own quilts,” he said.

For many, sewing’s appeal lies in having total control of a project in the picking of colors and fabrics and taking pride in the completed product.