Smartphone, Matchbox cars, and Risk and among Toy Hall of Fame finalists 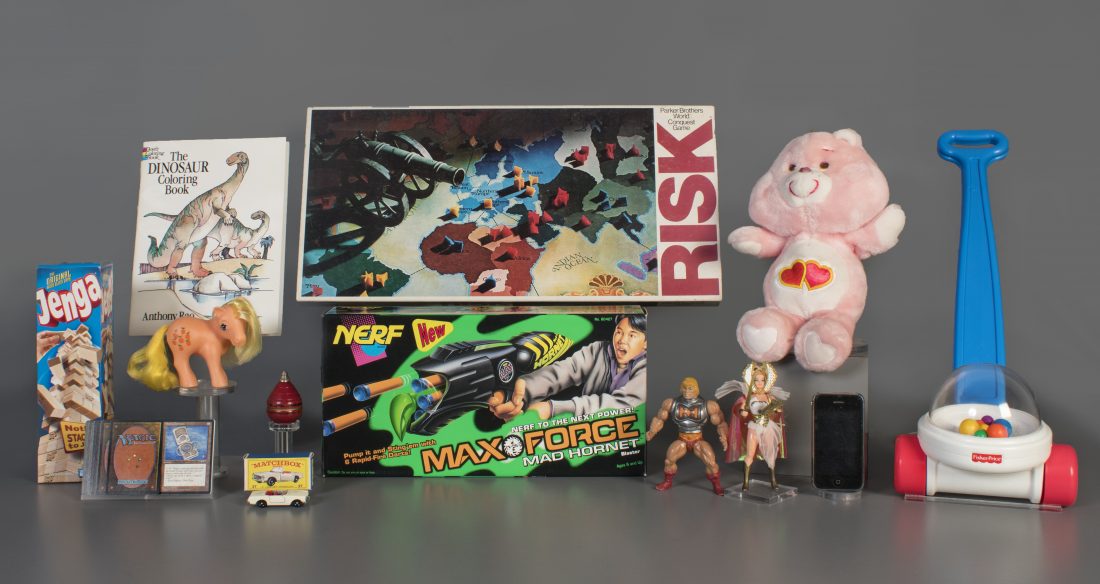 The Associated Press In this Aug. 13 photo provided by the National Toy Hall of Fame are the 2019 finalitsts, from left ot right, Jenga, Magic the Gathering, My Little Pony, Coloring Book, Matchbox Cars, Top, Nerf Blaster, Risk, Masters of the Universe, Care Bears, Smartphone, and Fisher-Proce Corn Popper. The smartphone is being considered for induction in the Nataionl Toy Hall of Fame this year in recognition of the way it has changed how people of all ages play and interact.

ROCHESTER, N.Y.– The smartphone is being considered for induction into the National Toy Hall of Fame this year in recognition of its impact on how people play and interact.

The other finalists announced Wednesday are: Care Bears, the coloring book, Fisher-Price Corn Popper, Jenga, Magic the Gathering, Masters of the Universe, Matchbox cars, My Little Pony, Nerf Blaster, Risk, and the top.

The smartphone earned a place among the 12 finalists because of its status as a platform for countless mobile games and playful interactions, including sending GIFs and altering photos, hall of fame officials said.

The winners will be inducted Nov. 7. Last year’s honorees were the Magic 8 Ball, pinball and Uno.

“These 12 toys represent the wide scope of play — from the simple, traditional spinning top that has been played with since pre-history to the ultra-modern smartphone which has dramatically changed how people of all ages play and connect,” said Christopher Bensch, vice president for collections.

Anyone can nominate a toy for consideration by the hall of fame, located inside The Strong museum in Rochester. The winners are selected with input from historians, educators and other experts who make up a national selection committee, as well as fans who can vote for their favorite online.

To make it into the hall, toys have to be innovative, widely recognized, shown to be more than a passing fad and foster learning, creativity or discovery through play. Sixty-eight toys currently occupy the National Toy Hall of Fame.

More about this year’s finalists from the hall of fame:

Care Bears: Funshine Bear and friends were created in the 1980s as a line of greeting card characters for the American Greetings Corp. but grew to star in television shows and games. In 2015, Netflix launched an animated series around them.

The coloring book: No longer just for kids, a new genre of coloring books featuring more complex designs has caught on with adults.

Fisher-Price Corn Popper: Toddlers have been pushing the wheeled toy along since 1957, watching and listening to the bright balls inside pop.

Jenga: The game in which players stack blocks and then try to remove them without toppling the tower was created by Englishwoman Leslie Scott based on wooden blocks from her childhood in Africa.

Magic the Gathering: The collectible card game was so popular when Wizards of the Coast released it in 1993 that the firm couldn’t keep up with demand. The fantasy-themed game requires both chance and skill.

Masters of the Universe: Mattel’s action figures, including He-Man and She-Ra, were featured in a cartoon series from 1983 to 1985 and have been on toothbrushes, sleeping bags and other merchandise.

Matchbox cars: The toy cars debuted in 1952 and, by 1960, were selling at a rate of more than 100 million a year in the United States. If inducted, they would join competitor Hot Wheels, which already have a place in the National Toy Hall of Fame.

My Little Pony: Introduced in the 1980s and reintroduced in 2003, the small pastel ponies outsold even Barbie for several years at the peak of their popularity.

Nerf Blaster: Kids use the toy guns to fire off soft foam darts, missiles and disks.

Risk: The strategy board game challenges players to control armies and conquer the world. It was based on the French game La ConquÍte du Monde and was introduced in the United States in 1959.

Top: The spinning top has been a childhood staple of cultures the world over, and depictions of it can be seen in art and pottery throughout human history.