'The Book of Mormon' a witty look at organized religion 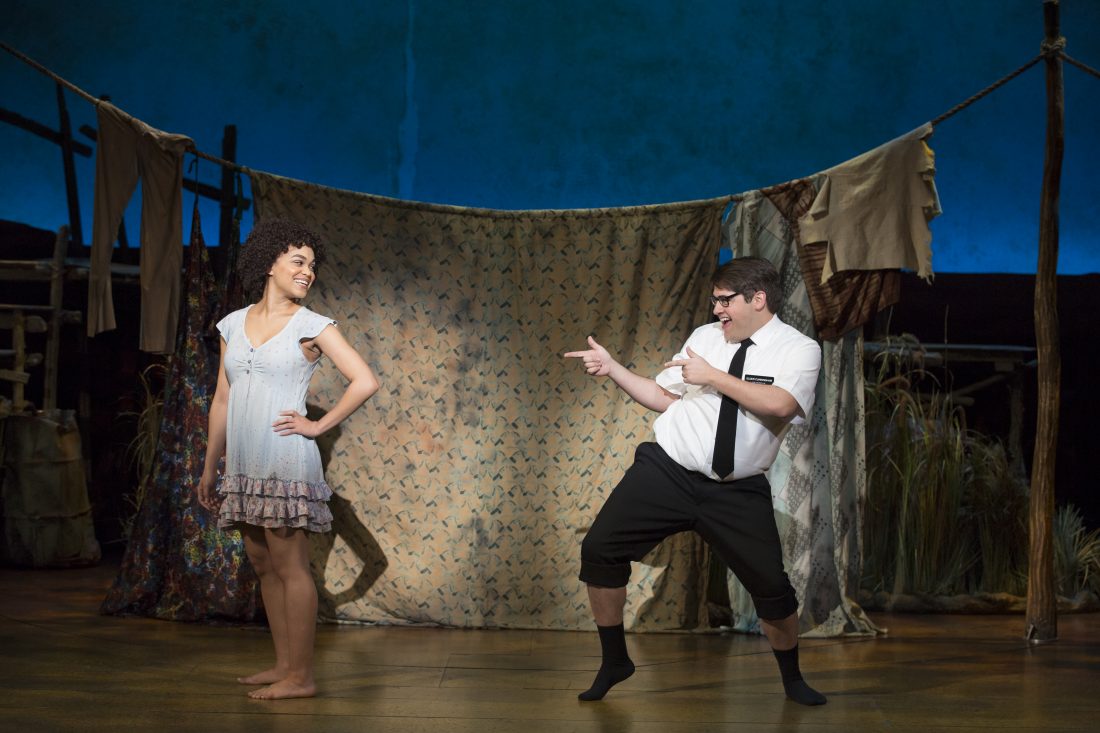 Courtesy photos Kim Exum and Connor Peirson act out a scene from “The Book of Mormon.”

The touring production of the funny, fresh and faithful Broadway musical “The Book of Mormon” will be onstage at the Eisenhower Auditorium at Penn State University from Oct. 8 through Oct. 13. The Center for Performing Arts is bringing the seven performance run — which brings humor and an inventive take on organized religion — to the area.

When “The Book of Mormon” first opened on Broadway in 2011, it was met with critical acclaim and sold out shows. The musical went on to become an award-winning play — netting nine Tony Awards, including one for Best Musical.

The creators of the show are Matt Stone and Trey Parker, the duo who also created the Comedy Central cartoon “South Park.” “The Book of Mormon” is met with the same comedy and wittiness that fans of “South Park” expect from the pair.

“The only thing you really need to know is that it is from the writers of ‘South Park.’ It is hilarious and beautiful, with a really beautiful message, which is probably why it’s a huge hit,” said Patrick Graver, who is in the ensemble cast for the upcoming production at the Eisenhower Auditorium.

Graver is a 2013 Pennsylvania State University graduate. He has been touring on this production and is looking forward to returning to Penn State for the upcoming performances.

He said, “When I saw this on the schedule I was so excited I was screaming. I love Penn State with all my heart. When you are an actor and traveling it’s hard to get back to the middle of Pennsylvania. I’m excited to spend a whole week there, seeing all of the faculty there. It’s really special; I’m thrilled.”

Another Penn State alumna who will return to her alma mater for the production is Brinie Wallace, a 2016 graduate. Wallace,who plays in the ensemble cast, is just as eager as Graver is to perform where she studied.

“It’s really exciting. I haven’t returned to the area since I left. I’ve been traveling and performing. It will be super nostalgic, seeing places equated with friends. It will be crazy to see old teachers. I’m excited and want to come back. I love the energy at Penn State,” Wallace said.

She explained that the musical is about two young missionaries–one seems more capable, more like the typical version of an ideal Mormon. The other one is on the very opposite end of spectrum. They are put together and shipped off to a nontraditional place for their mission, which challenges their beliefs and reality.

“They struggle about their beliefs and where they come from,” said Wallace.

Within the inner turmoil the characters face is an intense energy and optimism. Graver explained the show is full of vigor, something he enjoys. “This show very much has this energy that life is awesome,” he said.

Graver plays several characters during the musical and has 13 costume changes throughout the show. “I love how busy this is; there’s not a second to breathe,” he said.

Wallace agreed that the show is filled with vitality and comedy. “I hope the audience feels giddy; I know I do. I hope there’s a big amount of people massaging their mouths because they couldn’t stop smiling the entire time. I hope this does bring joy. It’s a crazy, crude example, but I really do hope people are joyful after this,” she said.

“The Book of Mormon” is packed with brash hilarity and wit, but also has an important, soulful message for the audience.

Wallace said, “The show is not so much about where you start, but where you end. It makes the case for every person on earth. We have all been down on our luck, with different circumstances. But there’s a great lesson bigger than ourselves. Rock bottom can’t define you for the rest of your life. It starts at rock bottom for these people, but goes on to introduce you to hope, community and love. It transforms you to spread love and joy to others; that’s what religion is about. It does a good job of explaining that it’s not what you believe, just as long as it spreads love and joy, then it is OK.”

MLB bracing for fallout from scandal

Osaka, Barty on to third round in Australia