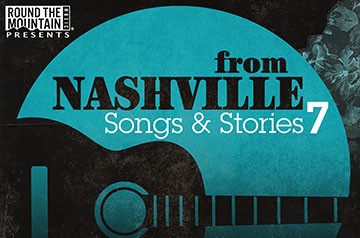 A trio of A-list songwriters — Jenn Schott, Phillip White, and Mark Nesler — will grace the Mishler Theatre stage Oct. 11 as Round The Mountain, LLC, presents “From Nashville: Songs and Stories, Vol. 7” to kick off a brand new season.

Altoona residents Dana Snyder and JT Garber are Round the Mountain and are dedicated to bring “Nashville to Altoona,” Garber said. Nashville is known for its “writer’s rounds” where songwriters perform accoustic versions of new material before intimate gatherings at coffee houses and restaurants. When Snyder relocated to Altoona from Nashville to be with Garber, she missed hearing songwriters perform and explain the inspirations — the stories — behind their songs. So the couple decided to bring Nashville to Central Pennsylvania.

“Each Songs and Stories show features three different top Nashville songwriters performing and sharing the hilarious, heartfelt stories behind hit songs they’ve written for stars like George Strait, Reba McEntire and Tim McGraw,” Garber said. “These one-of-a-kind ‘in the round’ acoustic shows are rarely found outside of Nashville and will delight all music lovers, not just country fans.”

White returns to Altoona and brings new songs and stories to share.

“I love playing in Altoona,” White said in a call squeezed in between writng sessions recently. “The Mishler is one of my favorite places to play in America — and I’ve been all over. The people of Altoona are so friendly and show their love of music. They (Dana and JT) are doing a wonderful thing for songwriters. They know how to treat you right and you know you’ll get to play a great show before a large audience.”

White is an Academy of country Music award-winning artist and a Grammy-nominated songwriter and producer. During his 25-plus years, White has co-written dozens of hits for George Strait, Luke Bryan, Chirs Ledoux, Vince Gill, Blake Shelton, Darius Rucker, Rascal Flatts and Reba. He penned the 2003 ACM Song of the Year “I’m Movin’ On,” by Rascal Flatts, Reba’s theme music for her self-titled hit TV show “I’m a Survivor.”

He has also performed with Schott and co-written with Nesler. Those established relationships and chemistry will make for an exceptional show, Garber said.

Advertising’s loss is music’s gain in Schott. Prior to her 1997 graduation from the University of Missouri, Schott had accepted a job in public relations when, according to an article in the university’s alumni magazine, a respected professor asked her, “Why eventually? Why not now?”

Schott, in that interview, described that advice as “pivotal in encouraging me to move” to Nashville where she took a position on the business side of the music business for three years before she landed her first publishing deal.

Her songs have been recorded by artists including Tim McGraw, Rascal Flatts, The Eli Young Band, Gloriana, Jana Kramer, Lucy Hale, Francesca Battistelli, Jamie Lynn Spears, Billy Ray Cyrus, Pam Tillis, Lonestar, Kelleigh Bannen, and Restless Heart, according to her website. She co-wrote Mickey Guyton’s debut single, “Better Than You Left Me,” which was named one of Billboard’s 10 Best Country Songs of 2015. She also penned the title track of Tim McGraw’s Grammy-nominated album, “Two Lanes of Freedom,” which was the namesake of McGraw’s 2013 summer tour. She also garnered radio airtime for Restless Heart’s “Feel My Way To You,” Katie Armiger’s “Unseen,” Billy Ray Cyrus’ “A Good Day,” and pop artist Lucy Walsh’s “1882.” She’s also had songs released by top-selling artists in Canada and Australia.

Nesler is known for these No. 1 singles: Keith Urban’s “You Look Good in My Shirt,” George Strait’s “Go On” and “Living and Living Well,” and Darryl Worley’s “I Miss My Friend.”

“He is one of Nashville’s most successful and well-respected songwriters and artists,” Garber said.

His other hit singles include: “For You I Will,” by Aaron Tippin, “Heaven in My Women’s Eyes,” by Tracy Byrd’s and American Idol finalist Bucky Covington’s debut single, “A Different World.”