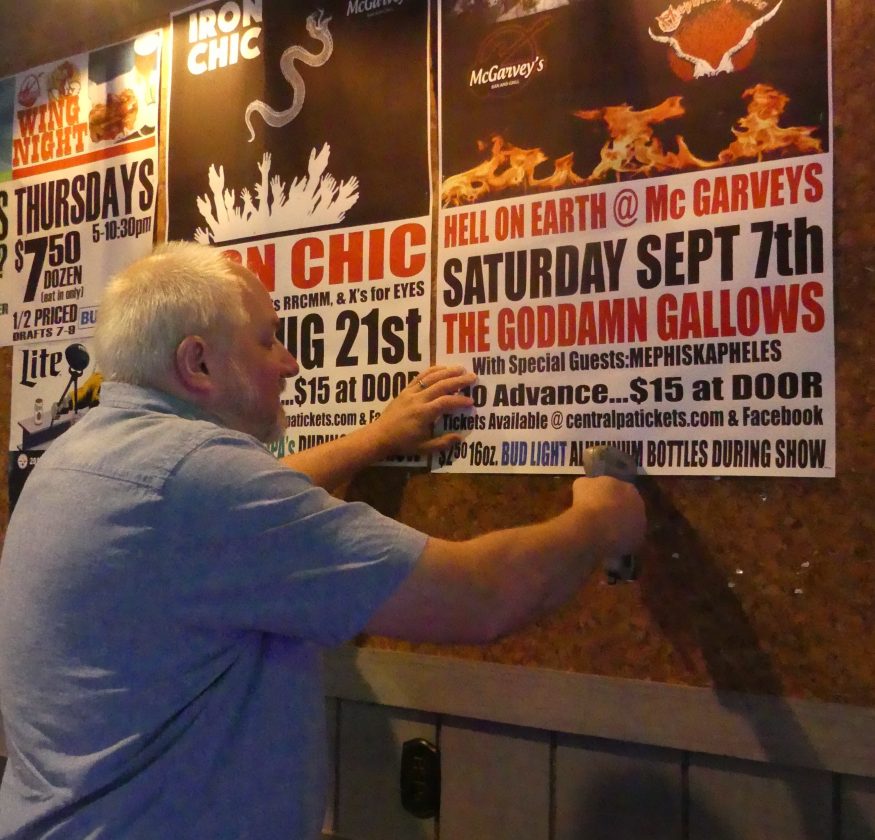 Mirror photo by Patt Keith Rich McGarvey staples posters for an upcoming show to a bulletin board.

It’s a narrative found in TV shows like “Cheers,” but Rich McGarvey, bartender turned owner, has carved a niche for his eponymous Juniata bar and grill by bringing in local, regional and national live performers in music and comedy.

McGarvey and his wife Kelly Markel purchased the venue from Aldo and Rosa Castrichina in 2012 so the elder couple could retire. McGarvey seized the opportunity as he’d been its bartender for 10 years. He re-named the bar McGarvey’s Bar and Grill and made a few other changes.

McGarvey’s uniqueness is its stage and self-contained audio and lighting systems, the owner said. Interest in live music slowly diminished with the increased popularity of streaming music services and the ability to create custom playlists accessible at all times, he said.

McGarvey’s offers open mic nights for local talent to gain experience and also attracts national touring acts such as Michale Graves, former frontman for the Misfits during the mid-1990s; Sponge, a ’90s rock band; Saving Able; C.J. Ramone, formerly of The Ramones, a 1970s punk band. By far the most popular act is The Reverend Horton Heat, called the “godfather of modern rockabilly and psychobilly,” according to one music reviewer. The Dallas-based trio enjoyed commercial success with 11 studio albums and has had its mix of country, surf, punk, big band, swing and rockabilly used in video games, commercials and cartoons.

McGarvey defines ” a great show” as one in which “the band comes in and engages with the audience. They feed off each other and it’s a lot of fun. That’s why I’m still doing it.”

Local comedian Jason Imler works with McGarvey on lining up comedic talent. Imler, a defense lawyer by day, performs in New York City venues about every-other-month and this provides him with an opportunity to see up-and-coming acts like Neko White, a stand up comedian, actor and writer.

He’s also become friends with international sensation Michael Harrison who has generously introduced him to other comics and helps spread the word about McGarvey’s.

For comedy nights at McGarvey’s, Imler serves as host and does a 10-minute crowd warm-up.

Sometimes a local or regional comic appears for five minutes to “get stage time. It’s most important for a standup to get stage time as often as possible to boost their development,” Imler said.

The night’s featured comic performs for 20 to 30 minutes.

“You have to write a lot. It’s sitting down and working at it. Comedy is art in an economy of words,” he said, saying an act ideally gets 4 to 6 laughs a minute or one laugh about every 15 seconds.

“A big part of a good show is diversity,” Imler said. “You don’t want people doing the same thing back-to-back. It’s not an all white males.”

Being a comic requires “a lot of wiring committed to writing, you have to write a lot. Sitting down and taking and working at it. An art of economy of words. Four to six laughs per minute, 10 to 15 seconds a laugh.

“We are working hard to get good acts and good people,” Imler said.

Among the comedy acts taking the stage in coming months are Liz Miele and White.

“He’ll be famous one day. He passed at the Comedy Cellar and that’s a big thing for a comic as it means they’re a regular. That’s where all the best comics come from. I have every expectation that in two years we won’t be able to afford him. He’s going somewhere.”

McGarvey has also expanded the musical acts that take his stage.

“It’s still punk rock but we’ve had a little bit of everything … acoustic, rock, hip-hop, folk. I want people to have a place to come and do their original stuff,” he said.

Graves is one of the most popular acts and is slated to return Nov. 23.

The bar and grill attracts a fairly young crowd, McGarvey said, but really its patrons are avid lovers of live music.

“It’s a place to hear and appreciate live music,” McGarvey said. “There’s something about live music that you can’t get over your phone. You feel the bass thumping in your chest … this is a place of community where you can meet a lot of different people. It’s a place of relationships and that is what really makes me happy.”