A journey to ministry

Pastor recounts road to the pulpit 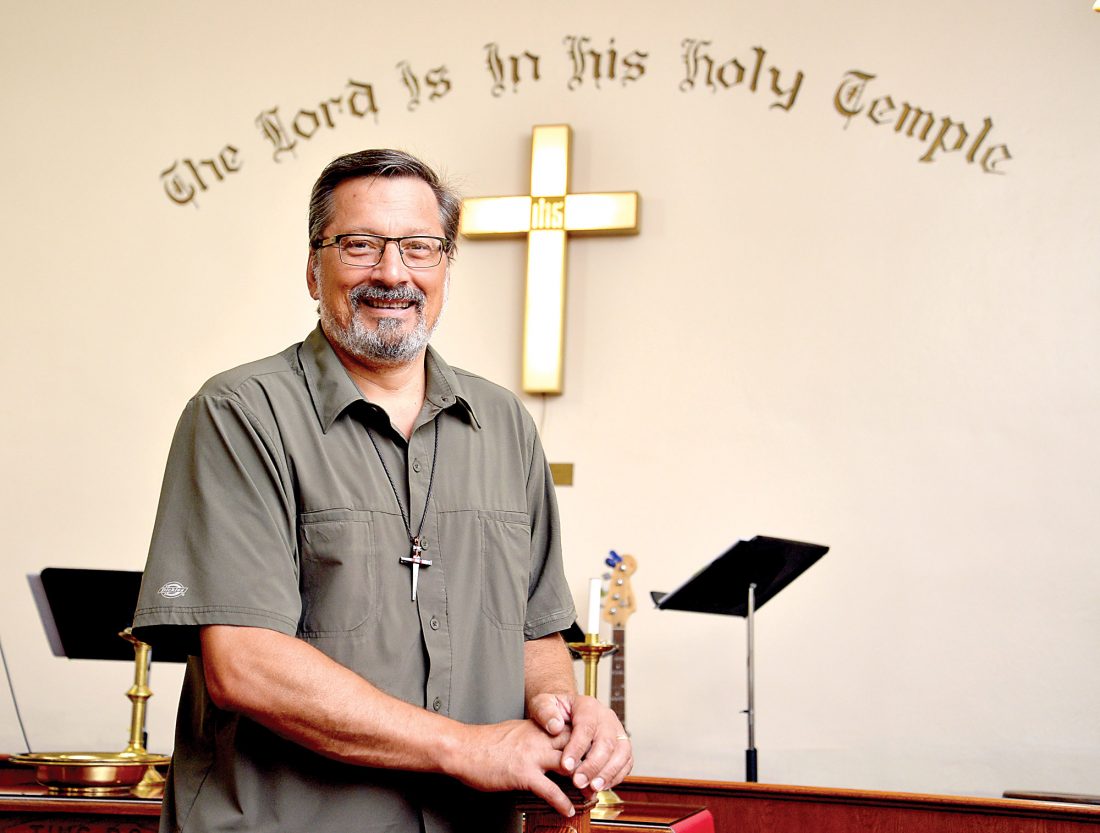 Mirror photo by Patrick Waksmunski Matt Hornberger, who previously owned a fishing camp along with his wife, Leann, never intended to become a pastor. But, he found out, life often doesn’t work out like we think.

Coming face to face with youth who lacked guidance started Pastor Matt Hornberger on a journey to full-time ministry.

About 20 years ago, he and his wife, Leann, were youth leaders at Liberty Baptist Church in Alanson, Michigan. Matt said when they worked with the elementary and junior high students, they realized that Judeo-Christian principles were alien to the kids.

“They didn’t have values to help them make decisions,” he said.

At the time, the Hornbergers were owners of a fishing camp, and Matt also worked as a operations manager for Builders Flooring. They moved from Altoona to Michigan in 1996, because Matt, a former salesman for Value City Furniture in Altoona, was named operations manager for the company in Grand Rapids, Michigan, and then, Detroit.

The years he spent in the furniture market addressed skills needed in life, he said, such as a work ethic, diligence and integrity.

“Those values come right from Scripture. I learned them in my own spiritual journey. Ecclesiastes, Proverbs, the words of King Solomon speak well of these things,” he said.

He then realized that God could use his background to help the kids in Alanson and make a difference in others’ lives.

Affectionately called “Mayberry North,” by Leann, Alanson (near Petoskey) is smaller than Bellwood, but its youth responded to the Hornbergers’ guidance at Liberty Baptist.

“We had more kids there on Wednesday night than there were kids in church on Sunday,” Matt said.

After about six years of living on the Inland Waterway of Northern Michigan, the Hornbergers decided to sell the fishing camp with its 370 feet of waterfront and return to Altoona with their four children to be closer to family.

When the couple put the business on the market in 2003, they were told it would take 18 months to two years to find a buyer.

The Hornbergers settled in Bellwood, Matt returned to Value City Furniture as a salesman, and the family resumed attending services at Fourth Street Church of God. Leann grew up in Altoona, and it was her home church. She got involved in the youth program there, and Matt began meeting with Pastor Jon Neely weekly.

Matt, who has a Bachelor of Arts degree in psychology, wanted to help Neely by becoming a counselor.

“It was never my intention to become a pastor,” he said.

He obtained a master of divinity degree in Christian counseling from Christian Bible College and Seminary in Independence, Mo., in 2007. However, a book he read for one of his courses made him adjust his thinking.

“Principles of Nouthetic Counseling” by Jay Adams advocates for counselors to be ministers.

In his book, Adams wrote that “The gift of counseling and pastoring overlay one another. The two shouldn’t operate separately.”

“All counseling must flow from Scripture,” Matt explained, adding that the most effective way to do that is to be a pastor, who can point out the Scriptures and lead a person to Christ.

“My counsel comes from the word of God and the heart of Jesus Christ,” he said. “I sincerely believe that,” he said.

Matt was beginning to see the call that his mentor already sensed.

“I recognized within him that he had a pastor’s heart,” Neely said. “He is obviously touched by the needs of people.”

As Matt learned more about a pastor’s role, Neely sent him to preach at churches with pulpit vacancies, including churches in Brisbin and Roaring Spring and the Hollidaysburg Church of God, where Matt served part time from

To prepare for his ordination, Matt enrolled in intensive classes at the Church of God General Conference in Findlay, Ohio, while continuing to work full time at Value City. He would sacrifice vacation to travel to Findlay and even attended his final two classes in 2016 while on medical leave for hip replacement surgery.

He also took classes in formation prayer counseling at Ashland University in Ohio.

“He is very intelligent,” Neely said. “He likes to read all kinds of stuff; some of it is pretty deep.”

Matt completed his studies and was ordained by the Eastern Regional Conference of the Churches of God in Harrisburg in April 2018. That same year, Neely announced his retirement and the church council approached Matt about applying for the position.

Among the members of the church council who recommended him for the pastoral opening was Gary Irvin.

Irvin also said Matt can be trusted and shows concern for others.

“If I had a problem, I know I could go to him and he would help me and keep it confidential,” he said.

He noted that he has a medical issue and said Matt “checks on me every time he sees me.”

Church member Daniel Weber of Altoona said Matt “is young, but not too young. He comes from the business world and knows about life.”

Weber sees the new pastor as being progressive. He is “a guy who wants to change the church from one era to another. He’s working on a

vision of what the church should look like. He is looking for change and wants change,” he said.

As the Hornbergers did in northern Michigan, Matt and Leann, who is the youth leader, would like to reach out to the local community.

Matt said they want people to know that God loves them, how they can be a child of God and why it is important.

He said there are a lot of hurting people in Altoona and the Fourth Street Church of God’s mission is to be a place of healing and a people of joy.

The Hornbergers are the parents of four children: Zachariah (wife, Amber) of Bellwood, Hannah, serving in the U.S. Air Force, Mikaela “Mikki” in Bellwood and Sarah (husband, Clay) Hasychak of Orlando, Fla. They also have a grandson, Nathaniel, in Bellwood.