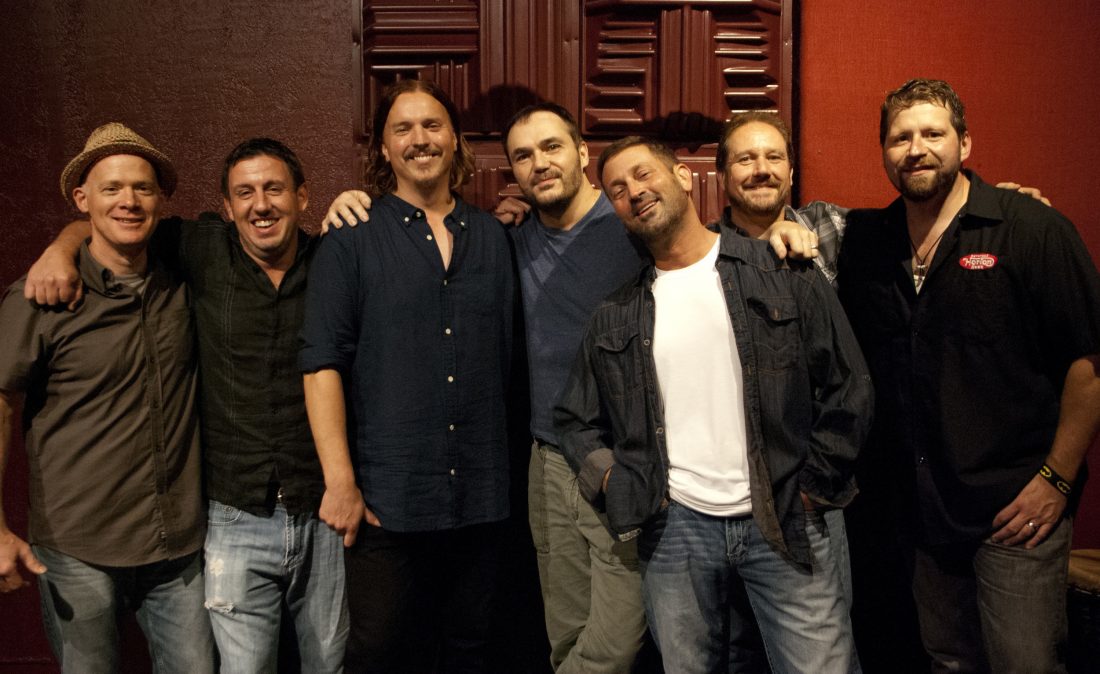 Jim Donovan and the Sun King Warriors think of themselves “as a rock-style band with a much bigger rhythm section,” said Jim Donovan. “We have a Santana-sized rhythm section and we play a mix of original material and covers that is all positive and high energy. People get up and dance and we like that.”

Together since 2015, the 7-member Pittsburgh-based band plays the Mid-Atlantic region year round, but summertime finds them traveling the most, Donovan said.

“We love to play in the Altoona area,” he said, “We play there a good bit as Kent (Tonkin) is from there,” noting the band played at an Altoona Curve Game in May and plays at an annual November fundraiser for an organization which provides services to grieving children.

Donovan sings and plays rhythm guitar, with an occasional foray onto the drum kit. Donovan is an assistant professor at Saint Francis University in the Fine Arts Department. He is also a founding member of Rusted Root who left the band in 2002.

“The whole reason we do it, is that we really enjoy hanging out with each other, the whole process of playing, rehearsing and writing. We are a very fortunate group of guys that are all on the same page,” Donovan said of Sun King Warriors.

In addition to original material, the Sun King Warriors will throw in one or two Rusted Root tunes, and always includes “Send Me On My Way,” a Top 40 tune which charted on Billboard’s Hot 100 in 1994. They also cover the likes of many 80s bands and classic rock bands like Led Zeppelin, Sly and the Family Stones, Grateful Dead and others.

“We’ll do anything that’s fun. It’s all up beat. We like to go from song-to-song-to-song without a lot of chatter. It’s all about getting the energy up. People who enjoy classic rock like the music on Rocky 99 radio station would like our original music.”

Attendees at First Frontier’s outdoor shows in Heritage Plaza July 27, may be treated to new music, according to Kent Tonkin, fellow band member.

Tonkin lives in Altoona and is an assistant teaching professor in the School of Business at St. Francis. The university president introduced the two on Donovan’s first day, “He knew I was a musician and I had long hair and he figured we’d get along. We were friends instantly. Jim is one of the most kind human beings I’ve had the privilege to call my friend.”

“To use Jim’s description of our music, it’s roots rock; Americana with two tons of drums. And, that’s pretty apt. It’s all about the rhythm. One plays kit, we have two percussionist and sometimes Jim jumps on the drums too, so sometimes we have four or more drummers going on.

“We play all kinds of instruments. It’s basically anything that makes noise by hitting it. We can do some things that are unusual. We’ll get drumming and be doing nothing but percussion and people will start to move and it’s so much fun,” Tonkin said. The rhythm eliminates barriers between band and listeners.

“If you are upright and walking, then you have rhythm. I don’t understand people who say they have no rhythm. Every human being has a heart beat and goes to a rhythm. It’s built into us. You can’t help but have a rhythm because you have a heart beat. It’s built into us. Everyone can make music. I’ve never been in a band that appealed to so many people. I never thought I’d be playing with guys like this and I’m lucky to get to do it,” Tonkin said.