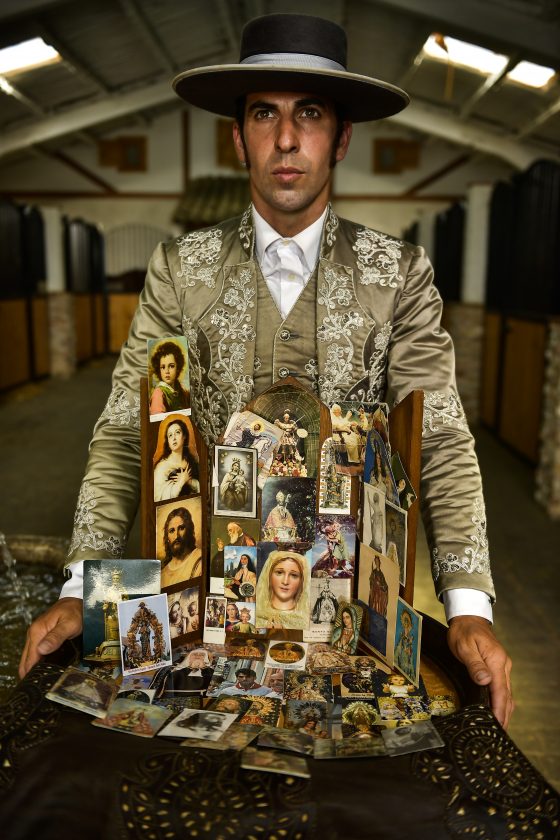 The Associated Press In this June 28 photo, Roberto Armendariz, 33, Spanish ''rejoneador'' or mounted bullfighter, poses with photos of saints and virgins that he uses to pray to before every performance, at his ranch in Noain, northern Spain.

NOAIN, Spain (AP) — Of all the traditions surrounding the world of bullfighting, the “rejoneo” — mounted bullfighting — is among the least understood.

Those who love it consider it a skilled art form. Others see it as a cruel and bloody crime for the sake of entertainment. Some also believe that the “rejoneador,” mounted on a horse and armed with his lance, takes a more cowardly approach to bullfighting compared to the traditional matador, who faces his victim-to-be on foot.

Nothing is farther from reality, says Roberto Armend’riz, a 33 year-old “rejoneador” who says he feels “a great deal of responsibility” every time he steps out into the bull ring with one of his highly trained stallions.

“When I’m on the horse, I go out of my way to confront the bull, searching for it. I do things that are highly risky but I still don’t want the horse to be hurt or to suffer,” he says while stroking the head of Heroi, a gray-spotted white male and one of his favorite horses.

There’s also much fear to confront, says Armend’riz, who performed last week in the bull ring of his native Pamplona, the city hosting Spain’s annual running of the bull races during the famed San Fermin festival that inspired American writer Ernest Hemingway.

Armend’riz, who took up bullfighting when he was 11 years old, said the beauty of horses first captivated his imagination.

Since he trained to become a professional, Armend’riz spends hours every day with his animals, often pampering Heroi, Farruco (which translates for Stroppy) and Diamante (or Diamond).

At a recent training session preparing for the weekend bullfight, Armend’riz practiced directing Heroi to stay away from the fiberglass horns of a fake bull head mounted on wheels.

Later, he showed off a small wooden box filled with religious prints of virgins and saints, some given to him by fans.

The prayers didn’t help on the big day. Armend’riz and his horse Farruco failed to earn any of the prices last week. He appeared nervous when the sword failed to go deep into the two bulls assigned to him that afternoon.

It took painfully minutes for the animals to die. Crestfallen, Armend’riz abandoned the ring as the audience applauded.

A good “rejoneador,” he told The Associated Press, is one who doesn’t fail in using the lance to kill the bull as fast as possible, keeping the matador and his horse safe while minimizing the pain for his victim.

“When you do it the right way, you earn fame,” he said. “But the horse, a noble animal obedient to one’s hands and legs, only receives a pat on the back.”

Every historically significant event had a beginning. It’s probably safe to say that, at least occasionally, ...