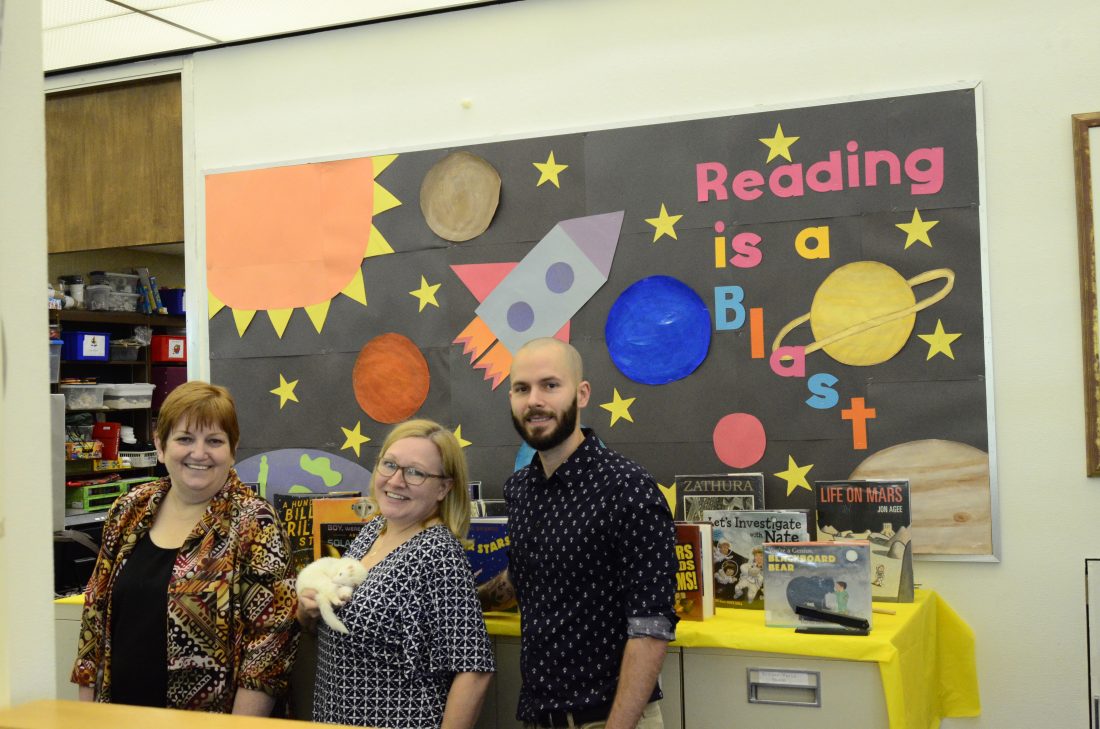 Photo for the Mirror by Matthew Callan Shelley Williams, who’s in charge of adult circulation at Altoona Area Public Library, is getting ready for the library’s summer learning event. She’s getting help from co-workers Kristy Wall, who’s holding the Youth Room’s pet ferret Grayco and who supervises the Youth Room, and Josh McConnell, who oversees teen circulation.

“Summer slide” is the phrase teachers, including librarians, use to refer to the erosion in learning that kids experience during the summer months. Some studies suggest children lose two months of math and reading skills over the summer. When they return to school in the fall, teachers have to spend at least a month going over those basic skills.

But if kids spent just a few hours every week learning something new in the summertime, they could start September ready to go to the next level. That’s one reason every summer the State Library System encourages all libraries in Pennsylvania to plan a summer program to promote not just reading but all kinds of learning. The program should be geared to children, teens and adults. The state system determines a universal theme for the program every year and this year’s slogan, in keeping with the 50th anniversary of the moon landing, is “A Universe of Stories.”

At Altoona Area Public Library, organizers have charted a course for all ages groups to enjoy plenty of learning activities this summer. Starting in the library’s youth room, children will spend eight weeks planning their own trip to Mars.

The children who sign up for the activities can choose from the “Cosmic Captains” or “Mission Masters” groups, depending on which day and time suits their parents’ schedule best. The kids will learn such skills as engineering and coding, but all they’ll know is that they’re having fun playing space travel, Wall said.

The youth program has other components such as an activity log that can help kids earn prizes throughout the summer. Little ones aren’t left out either as regularly scheduled events like Toddler Time and Story Hour will continue throughout the summer but will include the space theme, Wall said.

Some teens had a chance to kick off their summer program early when students from the Altoona Area High School recently toured the library.

They were able to sign up for a library card and also enroll in the teen summer program that is highlighted by an activities-based “Galaxy Bingo” game.

But there are other spaces that encourage teens to come on a field trip to the Canoe Creek Astronomy Club and another to spend an hour star gazing. Another block suggests they watch a movie about space exploration. The library has several on its roster that it will be showing free during the summer including “Apollo 13.”

Each bingo entry when completed gets the teen a potential entry for a grand prize, which is an $100 Amazon gift card, said Josh McConnell, who oversees teen circulation. Other smaller prizes are also offered.

“There are a lot of activities sprinkled throughout the bingo,” he said. “We made it that way so that they’d have a lot of different things to choose from and they’d get out and try new things.”

At the adult level, people have a choice of what they want to do to take part in the summer program, said Shelley Williams, who supervises adult circulation.

They can fill out “fun” sheets, donate to this year’s charity, which is Mending Hearts Animal Rescue, or check out books. There’s also an adult bingo sheet with suggested activities.

All give a person a chance to fill out an entry form for the grand prize, a one-year’s membership to The Summit Tennis & Athletic Club.

People can do all of the activities, or any combination, as many times as they want, Williams said.

“You do as much or as little as you want,” she said. “We don’t want it to seem like work. We don’t even like the name ‘program’ because when people hear that word, they think it means work and we don’t want it to be work for anyone.”

McConnell and Wall said the same thing is true for children and teens this summer.

Although they have made plans for eight weeks for each of their summer schedules of events, if young people can’t be there for all of it, it’s not a problem.

“If you go away for vacation, and if you can’t commit to the whole eight weeks, that’s OK,” said Wall.

The Summer Quest Learning Event will start at Altoona Library June 17. To register, either visit the library or call 946-0417.

Other public libraries in Blair County are also participating in the “A Universe of Stories” summer event.