Some songs never go out of style 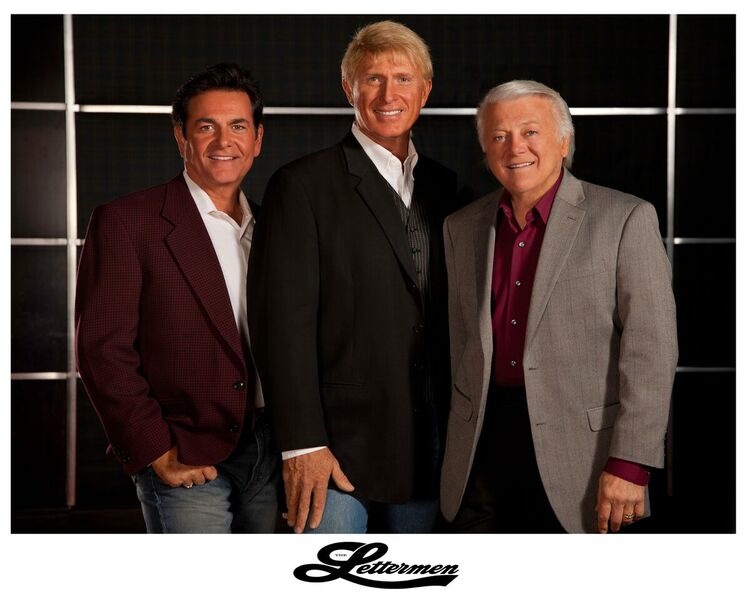 Courtesy photo Members of The Lettermen are, from left, Robert Poynton, Donovan Tea and Tony Butala, an original member of the group.

When James Daski wanted to bring the legendary singing group, “The Lettermen,” to Altoona two years ago, he couldn’t because the popular trio’s schedule was all booked up.

But Daski got a call two months ago that the group was available for a show here in May and he jumped at the chance.

“Their music covers multi-generations,” said Daski, who has run his own talent booking agency called JD Promotions for many years. “Even younger fans appreciate their music.”

Daski, who is bringing The Lettermen to the Mishler Theatre May 21 along with Altitude Entertainment, seems to be correct in his assessment. The show that’s scheduled for 7:30 p.m. is already almost sold out with only a handful of seats left on the main floor and about less than 20 left in the balcony.

The Lettermen are a perfect fit for not only for the Altoona area but also for the venue of the Mishler Theatre, Daski said. The group’s style featuring romantic ballads, which Daski expectes they’ll perform most of the night, blends well with the small, intimate stage of the Mishler.

But they’ll throw in some other tunes to keep everyone in the audience interested, which is why they’ve been able to sustain their popularity over the decades.

“Younger people will hear some things a little faster, something a little more current, that’s why they have an intergenerational audience,” Daski said. “They’re very talented individuals.”

The three men who make up The Lettermen singing group now are Tony Butala, Donovan Tea and Robert Poynton. Butala is the only original member who was with the group when it first hit the charts in 1961 with its hit “The Way You Look Tonight.” The other members at that time were Bob Engemann and Jim Pike. That group soon followed its first hit with another, “When I Fall in Love,” and was named best group of the year.

Many hits followed like “Goin’ Out of My Head” and “Hurt So Bad” and while Butala stayed, the other two spots were filled by talented vocalists over the years. For the past 35 years, Tea has held one of those slots.

He said it wasn’t easy at first to find his fit with the group. It wasn’t just a matter of coming to a few rehearsals and then going onstage.

“When (the original members) came together to form The Lettermen, it was because they realized they had a natural blend,” Tea said. “Even with the best producers and recording engineers in the world, you can’t artificially create a blend.”

The ability to blend with the other two members of The Lettermen is just one requirement to fit into the group, Tea said. A new member has to have a good solo voice plus be able to sing different types of harmony, from low to high parts, and be able to change from one to another quickly.

“Unlike most groups, The Lettermen have never had just one guy on the melody, one guy on the low part and one guy on the high part,” he said. “This sets The Lettermen apart from all the other groups. We change parts from song to song, sometimes in the middle of a song. And if we’re doing our job right, the audience never knows who is singing which part.”

Tea described the typical Lettermen concert in a way similar to the lineup that Daski had suggested — plenty of love songs but also other kinds of music sprinkled in for a little variety.

“Although The Lettermen do several types of songs in their live show, the majority of their hit records were soft romantic ballads,” Tea said. “At the end of every ‘sock hop’ and school dance after everyone had ‘Rocked Around the Clock,’ the disc jockey would put on music that couples could slow dance to. Let’s face it, you can ‘boogie woogie’ with anyone, but you slow dance with someone you love. And since love never goes out of style, neither do love songs.”

He also agreed with Daski that although many of the group’s audience members are “40-plus” in age, he’s “always been pleasantly surprised at the incredibly wide demographics of our audiences.”

Whatever age groups are in the seats, The Lettermen will come out to greet them because the singers don’t just stand onstage and sing, Tea said. They enjoy going out into the audience and taking photos with anyone who wants to take one.

“We love to breakdown that invisible wall and give the people what they really want, which is to forget about the outside world for just a little while and have fun,” he said.

The Lettermen will also pose for photos and sign autographs after the show in the theater lobby, Tea said.