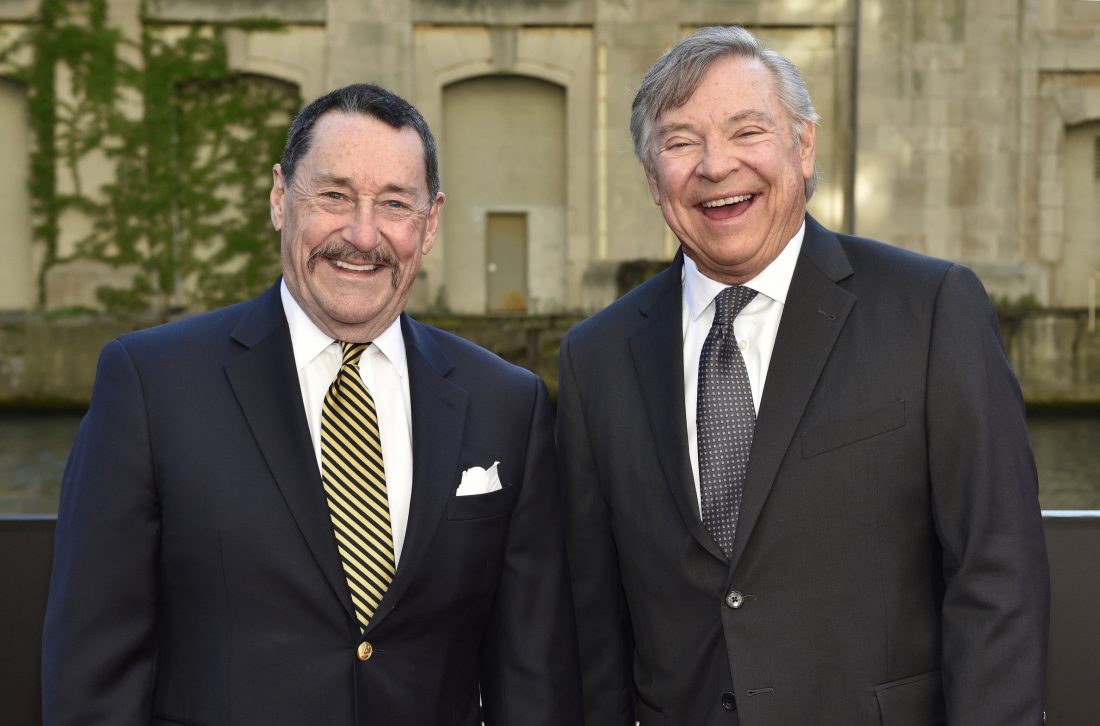 In this Tuesday, June 20, 2017 file photo, Peter Cullen, left, and Frank Welker pose for a photo at the U.S. premiere of "Transformers: The Last Knight" at the Civic Opera House in Chicago. Cullen and Welker could be heard in children's homes across the United States starting in the fall of 1984 as the heroic Optimus Prime and villainous Megatron respectively.

MIAMI — The Autobots have been waging their battle to destroy the evil forces of the Decepticons for 35 years, but there’s no sign the men who voice the Transformers franchise’s two most iconic characters would ever take up ion blasters or fusion cannons against each other.

Peter Cullen and Frank Welker have been heard in children’s homes across the United States since the fall of 1984 as the heroic Optimus Prime and villainous Megatron respectively.

They continue to lend their voices to both live-action and animated versions of the characters, and they’ll be infinitely more like to exchange jokes and old stories than deadly blows from a laser sword during appearances Thursday and Friday at MegaCon Orlando .

Transformers originated when the U.S. toy company Hasbro bought the rights to several existing Japanese toy lines that featured transforming robots and rebranded them for American children. A cartoon, “The Transformers,” was developed to help market the toys.

Welker, 73, got his first major voice-acting role in 1969 as Fred, the handsome, ascot-wearing leader of Mystery Inc. in “Scooby Doo, Where Are You!” He spent more than a decade after that voicing a host of friendly and comedic characters.

“When I saw Megatron, it gave me an opportunity to play a very nasty, evil character, and it was so much fun,” Welker said during a combined interview with Cullen.

Welker said he was especially impressed the first time he saw the toy of his character. It transformed into a silver and grey Walther P38 pistol. Welker said it would take him more than an hour to transform the toy, while young fans could do it in minutes.

“I was thinking this is just another job, but it’s pretty darn clever,” Welker said.

While the original cartoon ran just a few years, it left an indelible mark on pop culture. The toy lines continued, and a slew of spin-off cartoon series and comics were produced over the next two decades. This culminated in the launch of a multi-billion-dollar, live-action film franchise in 2007.

Before his audition, Cullen, 77, only knew that he would be reading for the part of a truck, though giving voice to a vehicle didn’t seem that crazy.

“You’re always auditioning for something in animation that’s a little off of the norm,” Cullen said.

When Cullen read about the heroic Autobot leader that turned into a red cabover semitrailer, he thought about his older brother, who had served as a U.S. Marine in the Vietnam War.

“He was my hero, and he certainly was the mainstay behind the character,” Cullen said. “I just did an impression of Larry, and he’s still alive in my mind today because every time I do Prime, there’s my brother Larry.”

When performing as Optimus, Cullen’s warm tenor voice drops to an authoritative baritone. The voice has stayed consistent over the years, from various animated series to live-action films.

Welker said Megatron’s voice, on the other hand, has changed with nearly every iteration.

“To me, it was all part of the Transformers world and is a little bit more like what Megatron might do,” Welker said.

Welker’s natural speaking voice is essentially the voice he’s used to play Shaggy and Scooby’s pal Fred for 50 years. But when he was cast as Megatron in the original cartoon series, he said he gave the evil Decepticon leader a contemptuous, mechanical rasp. When he returned to the character for a new animated series in 2010, following the success of the live-action films, he said producers wanted him to sound more human, to reflect what actor Hugo Weaving had done with the role in the live-action films. And after Weaving left the franchise, Welker said he adjusted the voice further when he took over as Megatron in the latest live-action movies.

In recent years, Cullen and Welker have been attending conventions around the country to meet with fans from multiple generations.

“It can bring tears to your eyes,” Cullen said. “I’m not exaggerating.”

Cullen said parents and children bond over Transformers at the conventions, with the parents sometimes getting more excited than the children. And he doubted this week would be different.

“I expect that I will run into a father with his son, and the father will more than likely get choked up,” Cullen said. “And then I get choked up, and then the kid is saying ‘What are these two grown men getting choked up about?'”