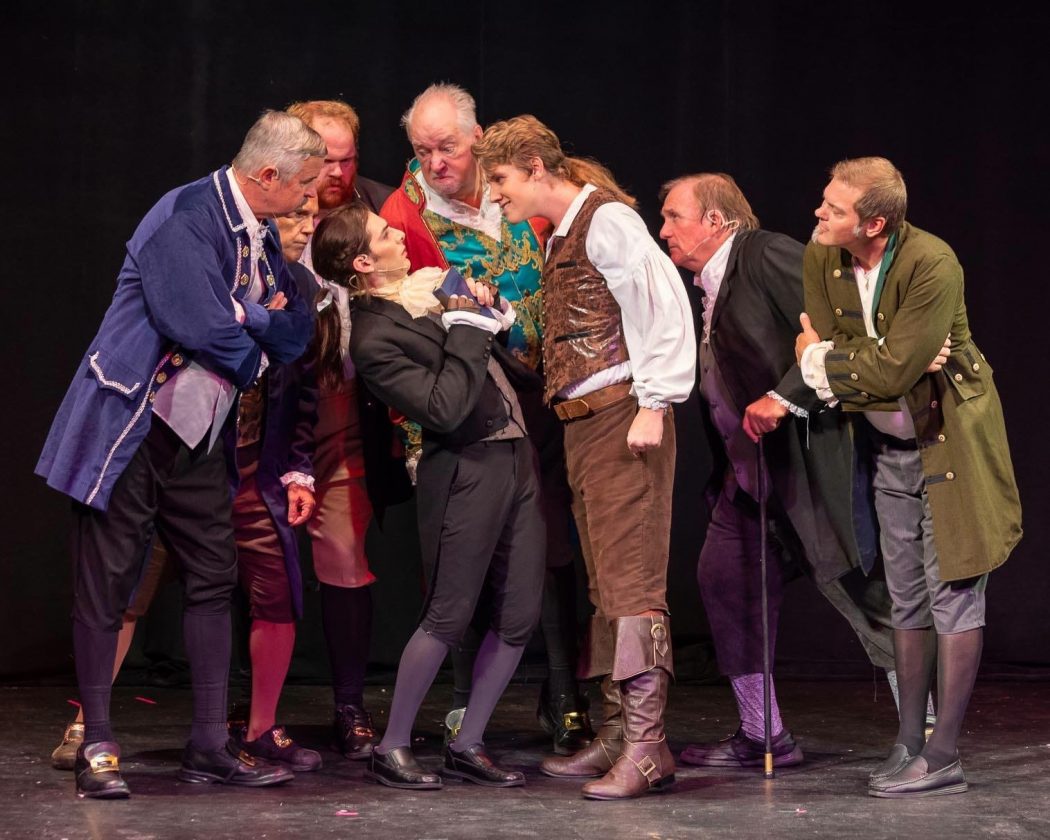 Courtesy photo Shown in a scene with town folk from the show are, Tony Demi as Ichabod Crane (center, left) and Ian Brumbaugh as Brom Bones (center, right).

William Allen Jones’ “Sleepy Hollow” debuted last October at the Mishler Theatre in Altoona. The show was met with acclaim and each of the performances sold out.

Word of this musical soon reached the famous town of Sleepy Hollow, New York. That town will celebrate the bicentennial of the classic book of the same name by Washington Irving this October.

The cast and crew of the musical by Jones will travel to Sleepy Hollow to perform the popular show as part of that celebration.

For those who want to see the musical and explore the town of Sleepy Hollow, but do not want to drive there or book a hotel, the Altoona Mirror, Altitude Entertainment and Raystown Transit Service have assembled a trip for the Oct. 26 performance.

The bus will depart from Altoona at 6 a.m. on Oct. 26 and will return to Altoona around 10 p.m. on Sunday, Oct. 27. The trip includes transportation to and from Sleepy Hollow as well as reserved tickets for the 8 p.m. Saturday show at the Irvington Town Hall Theater.

The five main leads from the Mishler show signed on to reprise their roles in the upcoming production in Sleepy Hollow. That cast is comprised of Tony Demi as Ichabod Crane, Ian Brumbaugh as Brom Bones, Ellie Irwin as Katrina Van Tassel, Rodney Berkey as Baltus Van Tasseland Gabbi Lechak as Hetty Smythe. They, along with show composer William Jones, visited Sleepy Hollow for creativity and to get an in depth feel for their characters and the town.

Jones said, “For inspiration we took a trip and met Jim (Logan from the Sleepy Hollow Visitor’s Bureau). The story is literally topographically correct. The Van Tassel mansion is still there — he (Irvin) didn’t make up the landmarks. He goes across an old bridge — the Horseman Bridge — and the Old Dutch Church is still there. The cemetery is there — a big tourist draw — with the people who inspired the characters buried there. The actors stood by the gravestones of those who they portray. It was a really inspirational, cool trip.”

Brumbaugh agreed that being in the town was a unique experience. He said, “There is such a history there; the town is incredible. It was so surreal walking the same path that Ichabod took in the story. We saw the actual Old Dutch Church and in the cemetery I stood behind the stone of my character of Brom Bones. The experience was incredible.”

The town is promoting the musical and local establishments are getting into the spirit of the show as well. “A restaurant wants to create drink for people for opening night,” Jones said.

The cast and crew are hoping those who see the show in its namesake town will find the experience and antiquity of the town as unique as they did. They are also hoping some of the community will join them in the celebration of the book and their musical that has received much acclaim.

Jones said, “There’s a lot of great buzz about the show. It’s a funny thing, but the timing couldn’t have been better. We’re really looking forward to it.”