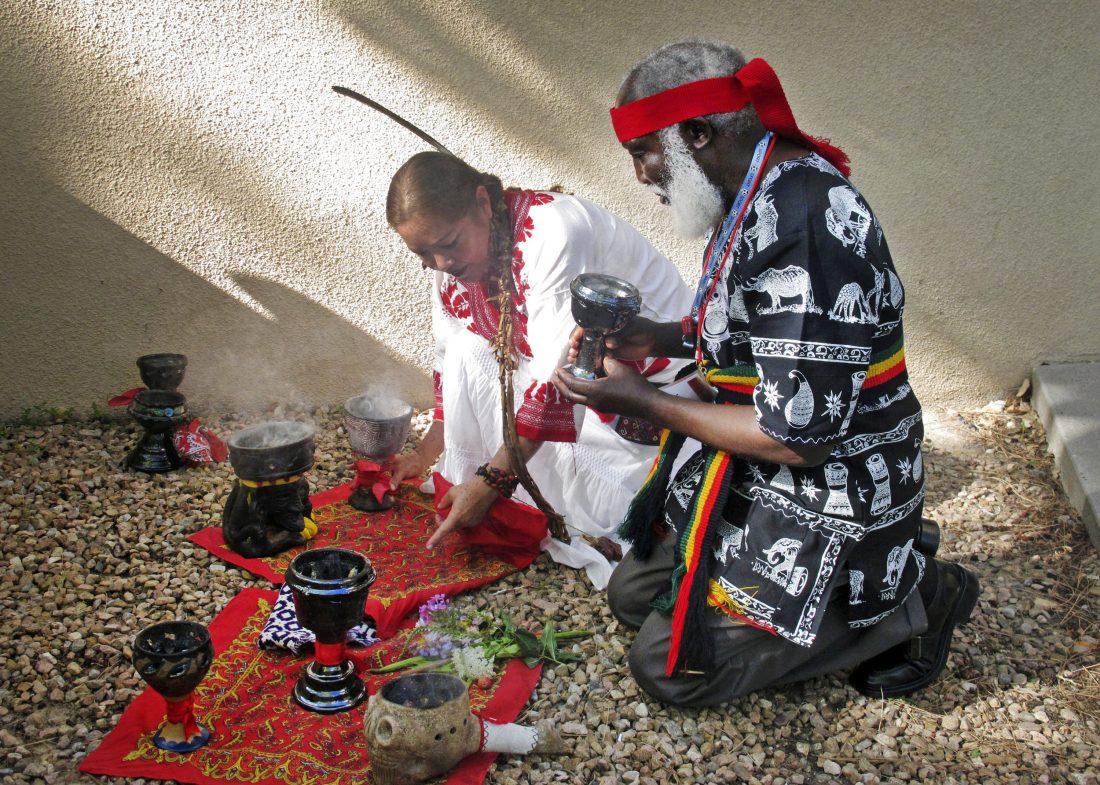 The Associated Press This July 2013 file photo shows curanderos, or traditional healers, conducting a ceremony on the campus of the University of New Mexico in Albuquerque. “The Curse of La Llorona” promotion using traditional Mexican healers for “spiritual cleansings” before screenings is drawing strong criticism from healers and scholars. Critics say the movie released April 19 is based on a Mexican folktale that has nothing to do with healers known as curanderos and the promotion exploits traditional healing practices used by Mexicans and Mexican Americans just to sell a film.

ALBUQUERQUE, N.M. — A promotion around the movie “The Curse of La Llorona” using traditional Mexican healers for “spiritual cleansings” before screenings of the horror film is drawing strong criticism from healers and scholars who say the stunts are offensive and demeaning.

Leading up to the release of the movie based on a Mexican folktale last week, Warner Bros. invited healers known as curanderos to give audiences cleanings called “limpias.” The studio also dispatched Cuban-born, Los Angeles-based healer Salvador Gata to “bless” an audience before the March 15 premiere at SXSW at The Paramount Theatre in Austin, Texas.

In addition, photos posted on social media show images of supposed healers providing ceremonial cleansings in front of posters of “The Curse of La Llorona,” then celebrating as if attending a party.

“I’m working on the movie La Llorona and am looking for a curandero to do limpias before my movie screenings,” publicist Nahir Wold wrote San Diego-based curandera Grace Sesma in an email. “Let me know if this is something you would be interested in doing!”

Sesma said she ignored the invite until she started seeing photos of purported limpias at screenings online. That angered her and she posted the email on her Facebook page.

“I found it quite shameful,” Sesma said. “It heightens the fear factor around a traditional practice and commodifies and exploits our culture just to get people to see their movie.”

Wold did not immediately return emails and phone messages left by The Associated Press.

Tonita Gonzales, an internationally known curandera based in Albuquerque, New Mexico, called the promotion an “outrage and an appropriation” of Mexican American culture.

“The limpia is a cleansing that helps people see the holy that’s within them,” Gonzales said. “To use this to promote a movie, especially during (Easter Weekend), is disturbing.”

“The Curse of La Llorona,” starring Linda Cardellini and Raymond Cruz, centers on the Mexican folklore of La Llorona, a crying female spirit who takes children.

Curanderismo is the art of using traditional healing methods like herbs and plants to treat various ailments. Long practiced in Native American villages of Mexico and other parts of Latin America, curanderos also are found in New Mexico, south Texas, Arizona and California.

Anthropologists believe curanderismo remained popular among poor Latinos because they didn’t have access to health care. But they say the field is gaining traction among those who seek to use alternative medicine.

A limpia is something performed for those suffering from a severe illness or trying to overcome trauma from sexual abuse, Sesma said. “It’s not supposed to protect you from being scared at the movies.

University of New Mexico professor Eliseo “Cheo” Torres, who hosts an annual conference in Albuquerque on curanderismo, said the tale of La Llorona has nothing to do with curanderos, even if there are curanderos in the film. “I don’t see the connection and this probably will be offensive to those practicing traditional healing,” Torres said. “Whoever put this promotion together likely has no idea what they are doing.”

Andrew Chesnut, the Bishop Walter F. Sullivan Chair in Catholic Studies at Virginia Commonwealth University and a scholar who has studied spiritual practices in Mexico, called the movie promotion “reprehensible” and harmful.

“It will only serve to further stigmatize curanderismo as something to be feared,” Chesnut said. “That’s dangerous, especially because of the climate that Mexican immigrants face right now.”